Kisetsu Morita’s I’ve Been Killing Slimes for 300 Years and Maxed Out My Level started out as a light novel series, and one that I have thoroughly enjoyed reading every volume of so far.
Now, I am taking a look at the manga adaptation of the light novels, drawn by Yusuke Shiba. Let’s see if the manga adaptation does is able to live up to the original source material.
Yen Press licensed the manga for an English release. This first volume of the Killing Slimes manga contains chapters one through to six. 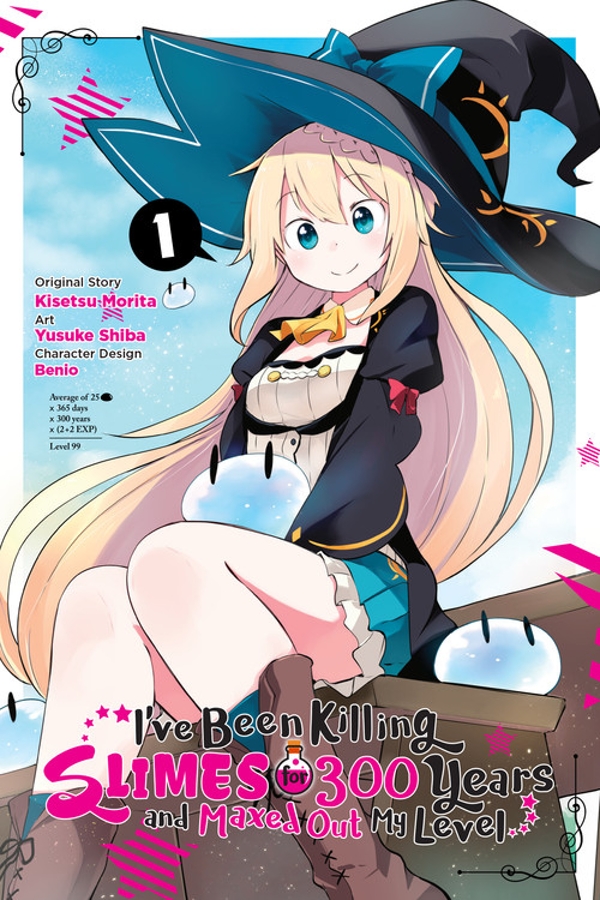 Front cover of the first volume of the I’ve Been Killing Slimes for 300 Years and Maxed Out My Level manga, featuring Azusa

From corporate slave to a laid-back witch – reincarnation’s a pretty sweet deal! Or so Azusa believes until her maxed-out status comes to light… In this new manga adaptation of the original novel, enjoy the hilarity that ensues as Azusa attempts to evade all forms of adventure and regain her lazy life!

As one might expect, this volume of the manga starts at the beginning of the story, with Azusa’s reincarnation. It then skips forward three hundred years, during which time Azusa had been killing slimes.
This first volume is our first introduction to Azusa, her dragon apprentice Laika and the slime spirits Falfa and Shalsha in the manga adaptation, and events play out almost identically to how they are described in the original light novel.
Definitely a faithful adaptation of Kisetsu Morita’s work, and it is a joy to experience it all again in manga form.

Yusuke Shiba’s art is excellent, and Azusa gets some really great expressions throughout. The whole tone of the light novels is captured perfectly here. There’s plenty of humour to be found here, and we get a glimpse at the start of Azusa’s family life that I have come to adore from reading the light novels.

As for the story, I can pretty much just echo my sentiments from my review of the first light novel. Pretty much because everything I said about it pretty much applies here… Just a lot of fun and cute stuff, definitely well worth a look for those who enjoy slice of life.
A wonderful adaptation. Both light novel and manga are delightful.

I enjoy writing, manga, anime and video games, so naturally here on my blog, you will find anime reviews, Nintendo news and other such things that I deem interesting.
View all posts by Rory →
This entry was posted in Manga and tagged Benio, I've Been Killing Slimes for 300 Years and Maxed Out My Level, Kisetsu Morita, Manga, Volume 1, Yen Press, Yusuke Shiba. Bookmark the permalink.