Thoughts on Didn’t I Say to Make My Abilities Average in the Next Life?! The Manga Volume 4

The fourth volume of Nekomint’s Didn’t I Say to Make My Abilities Average in the Next Life?! manga takes us back into the past, to show us how a certain characters loathing of bandits came about, followed by the Crimson Vow wrapping up a mission.
This volume contains chapters seventeen through to twenty. 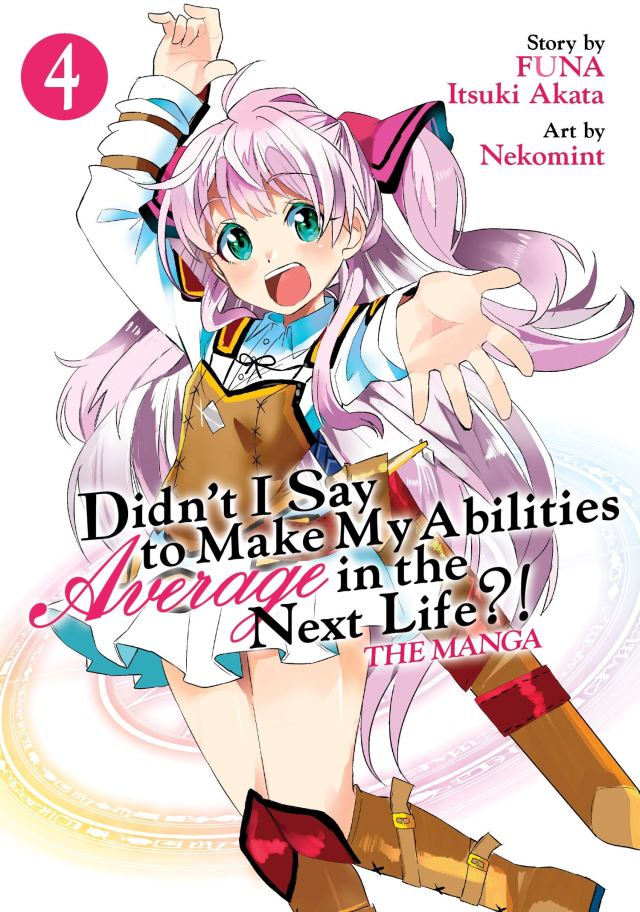 Front cover of the fourth volume of Didn’t I Say to Make My Abilities Average in the Next Life?! The Manga, featuring Mile

I’m never losing my friends again!
Mile and the Crimson Vow have taken on a job protecting a caravan. After Reina goes a bit overboard with an attack spell, she finally reveals the reason behind her intense hatred of bandits. And Mavis gets an unexpected visitor whose appearance could change her life!

Reina reveals her tragic past to the other members of the Crimson Vow in this volume, and I feel like the art style for that flashback is somewhat different. It feels more sharp, somehow. It’s most noticeable when Reina has absolutely lost it.
This particular flashback might have some of the darkest imagery in the entire Abilities Average manga. The flashback does feel somewhat abridged compared to the other versions, though.

There’s quite a lot of action in this volume, not just in Reina’s flashback. The Crimson Vow are on a job after all, and they do run into plenty of enemies – perhaps more than expected. Their mission takes quite a turn, but that doesn’t prevent the Crimson Vow doing their thing.
Does it feel like there’s any threat there? Absolutely not. Does it look cool, though? Yes, yes it does.
Of course, Mile wants to avoid spectacles like that, but Mile is Mile after all…

This volume starts getting prepared for the next arc as it comes to a close, one which will bring Mavis into the spotlight.

Some pretty dark stuff to be found here, but the tone soon returns to what you’d usually expect from Abilities Average. Still a decent entry in the manga adaptation, though.

I enjoy writing, manga, anime and video games, so naturally here on my blog, you will find anime reviews, Nintendo news and other such things that I deem interesting.
View all posts by Rory →
This entry was posted in Uncategorized and tagged Didn't I Say to Make My Abilities Average in the Next Life? The Manga, FUNA, Itsuki Akata, Manga, Nekomint, Seven Seas Entertainment, Volume 4. Bookmark the permalink.