I’ve Been Killing Slimes for 300 Years and Maxed Out My Level Episode 5: Halkara’s Suspected Graduation

Halkara has plans for opening a new factory in the fifth episode of I’ve Been Killing Slimes for 300 Years and Maxed Out My Level, but there’s a slight ghost problem. Of course, Halkara turns to Azusa to solve that for her. 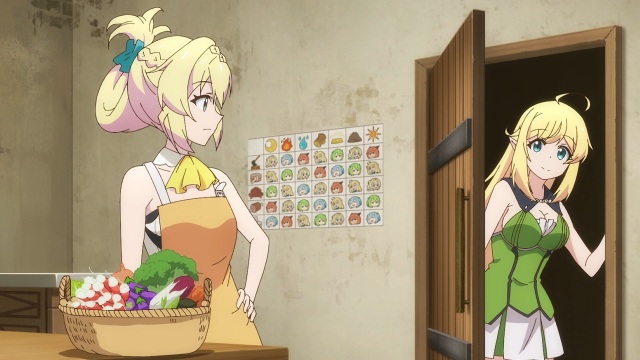 This episode adapts chapters from the second light novel, specifically: “Halkara’s Suspected Graduation”, “A Ghost Appeared” and “The Halkara/Rosalie Separation Maneuver”. What we don’t get, though, are the first two chapters of the second light novel. I guess they’ll be focusing on the ones where new characters are introduced.

Halkara tells the family about her ghost problem

“Halkara’s Suspected Graduation” is a fairly abridged version of the chapter from the light novel. Which is unfortunate, because that means we miss out on Shalsha’s artistic talent. There’s also more preparation for the party in the light novel, but the end result is still the same.

Moving on to the next chapter, we have “A Ghost Appeared”, and Azusa’s attempt at summoning Beelzebub goes exactly the same way in light novel. Azusa just shutting the door after discovering her got a good laugh out of me, too. Beelzebub was also working on something when Azusa summoned her, but she doesn’t mention that in the anime.

Of course, the ghost is a cute girl. What else would you expect? Not that I’m complaining. After some “encouragement” from Beelzebub, she introduces herself as Rosalie, and shares her story.

The solution for getting Rosalie out of the factory leads us to the “The Halkara/Rosalie Separation Maneuver” chapter, in which Rosalie proves to be a little too compatible with our buxom elf lady.
Azusa and her family try multiple methods to get Rosalie out of Halkara; even a couple that don’t appear in the light novel. The ones that do appear are changed up a little bit – it is Azusa who carries Halkara/Rosalie into the air and drops her in the light novel, whereas Laika does the deed in the anime.

Beelzebub takes Halkara into the bathroom

Summoning Beelzebub definitely paid off quite well for Azusa in the end.

A shame we didn’t get the first two chapters of the second light novel adapted, but I can see why they’d prioritise introducing new characters. Still got plenty of fun out of what was adapted here, though.

Great episode, and a welcome new addition to Azusa’s family.

I enjoy writing, manga, anime and video games, so naturally here on my blog, you will find anime reviews, Nintendo news and other such things that I deem interesting.
View all posts by Rory →
This entry was posted in Episodic and tagged Azusa, Beelzebub, Episode 5, Episodic, Falfa, Halkara, I've Been Killing Slimes for 300 Years and Maxed Out My Level, Laika, Rosalie, Shalsha, Spring 2021 Anime. Bookmark the permalink.

1 Response to I’ve Been Killing Slimes for 300 Years and Maxed Out My Level Episode 5: Halkara’s Suspected Graduation