Back in 2015, Nintendo unleashed the Inklings upon the world in a fresh take on the third-person shooter genre with Splatoon. Just last year, Splatoon 2 was released for the Nintendo Switch.
However, it is not the games I will be talking about here. No, instead, I will be taking a look at a manga adaptation by Sankichi Hinodeya. The manga was originally serialised in Shogakukan’s Bessatsu CoroCoro Comic Special magazine in February 2016, after a one-shot appeared in CoroCoro Comic in May 2015.
The series is being published in English by Viz Media.
This first volume contains five chapters – the fifth chapter is actually the one-shot, and is labelled as chapter zero. 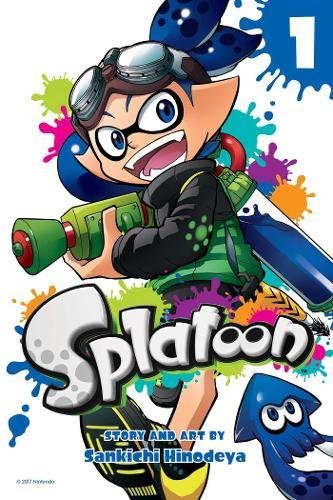 The Turf Wars have started in Inkopolis, and the team that inks the most ground will be crowned the winner! Goggles and Team Blue are ranked lower than their competitors. But with some teamwork and a touch of creativity, they might just leave their mark on this tournament!

Though the first Splatoon did features a single-player story mode, this manga adaptation chooses to focus on the Turf Wars instead – which are effectively the multiplayer side of Splatoon.
Of course, since this manga was serialised before the release of Splatoon 2, everything is done by the first game’s rules, with the first game’s weapons and gear as well. Don’t expect to see any Dualies or Splat Brellas here – for now, at least.

The focus of this manga is Team Blue; a team made up of two female and two male Inklings. They are named after the gear they wear; the two girls are Headphones and Bobble Hat, whilst the boys are Specs and Goggles.
Goggles is essentially the main character, and he is a bit of an idiot. The first thing he does is show up to a Turf War naked, because he overslept. A little Inkling squid serves as a censor for that particular scene.
Actually, that happens to be a running gag throughout the manga. It starts to get stale after a while… You’ll also notice that the female Inklings are never subject to any nudity jokes.

Each chapter tends to follow something of a formula, too. Whilst Team Blue has a low rank in the Turf Wars, they keep getting matched with the high rank teams. Pretty much every time, the opposing team takes the lead.
Of course, the Team Blue manage to come back in some way – often due to Goggles’ idiocy, which makes him rather unpredictable. There are some genuinely funny moments in the way that the blue team are able to turn their matches around.
Of course, Team Blue aren’t the only characters. After all, they need opponents to splat. The thing about the opposing teams is that they generally consist of one character with a personality (the leader), and their allies.
Actually, Blue Team is somewhat similar in that regard as well. Goggles leaves the biggest impression on the reader, whilst his three team mates seem to be there just to react to his idiocy and support him during the Turf Wars.

The first volume of the Splatoon manga is an enjoyable read, though if you were hoping to see Marie and Callie you’ll be disappointed. They have cameos as commentators for the matches, but that’s about it.
It is something that I can easily recommend for fans of the games, and if you fancy reading something silly and light-hearted, then the Splatoon manga may just scratch that itch.
Some of its jokes do get repeated a little too often, and it would be nice to see all four members on a team get equal billing.
Regardless, I’ll be picking up the next volume when Viz Media release it. After all, I did enjoy this first one.

I enjoy writing, manga, anime and video games, so naturally here on my blog, you will find anime reviews, Nintendo news and other such things that I deem interesting.
View all posts by Rory →
This entry was posted in Manga and tagged Comedy, Manga, Sankichi Hinodeya, Splatoon, Volume 1. Bookmark the permalink.