The summer season of anime has come to an end, so it’s time for me to take a look back at it. With that said, it’s time to hand out some arbitrary awards.
But first, the shows I watched this season:

These awards will potentially contain spoilers for the shows listed above. Now, let’s just dive straight in.

There’s a lot of very good opening themes this season, so it’s been tough for me to narrow it down to three. The winner and runners-up here are pretty much interchangeable, since I think pretty highly of all of them.
Anyway, the winner here is the second opening theme for JoJo’s Bizarre Adventure: Diamond is Unbreakable. A pretty great song, and we get to see the various Stand users that inhabit Morioh.
Runners-up: “Aozora Jumping Heart” by Aquors (Love Live! Sunshine!!); “99” by Mob Choir (Mob Psycho 100)

Shigeo Kageyama, or Mob, is an incredibly powerful Esper. Knowing that his powers can be dangerous, he shackles his emotions. However, various events push him to unleashing those emotions, and when he does it’s a spectacular explosion. Trying to suppress emotions becomes somewhat difficult when you have to deal with evil spirits, antagonistic Espers and a group that kidnaps your brother in a case of mistaken identity…
Runners-up: Love Live! Sunshine!!; JoJo’s Bizarre Adventure: Diamond is Unbreakable

The first member of Aquors, Chika

Whether it’s µ’s or Aquors, both groups had to start somewhere. In the case of the latter, it was with this lass here: Chika Takami. A sociable girl who strives to never give up and is very self-confident. It’s pretty easy to see why both You and Riko are attracted to her.
Runners-up: Illyasviel von Einzbern (Fate/kaleid liner PRISMA ILLYA 3rei!!); Josuke Higashikata (JoJo’s Bizarre Adventure: Diamond is Unbreakable)

The main antagonist of JoJo’s Bizarre Adventure: Diamond is Unbreakable is a serial killer who just wants to lead a quiet life. His Stand, Killer Queen, certainly helps him with that taking into account its abilities, though things become harder for him when he crosses paths with Jotaro Kujo and Koichi Hirose.
Also has a thing for severed hands.
Runners-up: Zamasu (Dragon Ball Super); Darius Ainsworth (Fate/kaleid liner PRISMA ILLYA 3rei!!)

Best Female Character (that’s not from Love Live! Sunshine!!)
A bit of housekeeping before I present this award: all the girls from Love Live! Sunshine!! are great characters in their own ways, and if I don’t have a separate award for them then the female characters from all the other anime I watched will be overshadowed. As such, the Aquors girls will have their own separate award.
Maihime Tenkawa

The best characters in Qualidea Code come from Kanagawa

One of the protagonists of Qualidea Code, Maihime is the head of Kanagawa City. She can be idealistic, though she has incredible power to back it up. She can go a little overboard with said power, thus resulting in a lot of collateral damage. She’s also voiced by Aoi Yuuki, so bonus points for that.
Runners-up: Hifumi Takimoto (NEW GAME!); Tanaka (Fate/kaleid liner PRISMA ILLYA 3rei!!)

You was where right from the beginning, supporting Chika’s dream of becoming a school idol. Even when she seems to be drifting apart from Chika, she remains determined to be a school idol. Things work out in the end, though.
You is also obsessed with uniforms, and thus is one of the wardrobe supervisors of Aquors. She is also at a national level when it comes to high diving.
Now, whilst I have no doubts that You is best girl, choosing two runners-up will be difficult. All nine members of Aquors have their own charms.
Runners-up: Chika Takami, Riko Sakurauchi, Ruby Kurosawa, Hanamaru Kunikida, Yoshiko Tsushima, Dia Kurosawa, Mari Ohara & Kanan Matsuura

What? There’s nothing wrong with having eight runners-up instead of the usual two.

Shigeo Kageyama, or Mob, as he is better known, is the main protagonist of Mob Psycho 100. A powerful esper who chooses to keep his emotions shackled so he doesn’t hurt innocents with his powers. However, events can push him towards an explosion – and it happens several times over the course of the series, with spectacular results.
Then his brother is kidnapped, and Mob starts willingly using his powers to get him back; even keeping his emotions under control, Mob is still powerful.
Runners-up: Kasumi Chigusa (Qualidea Code); Eiji Hayase (Time Travel Girl)

There’s been strong competition for this one, but I think the trials and tribulations that Aquors have overcome have cemented them as my favourite group of characters from this season. In fact, I may even collectively like Aquors more than µ’s…
Of course, You is best girl as stated above, but traits such as Yohane being a chuunibyou, Mari’s gratuitous English and Hanamaru’s amazement at technology makes for a compelling cast of characters.
Runners-up: Staff of Eagle Jump (NEW GAME!); People of Morioh (JoJo’s Bizarre Adventure: Diamond is Unbreakable)

Love Live! Sunshine!! may have just pipped NEW GAME! to the post for the cast of characters, so I guess it’s only fair things are turned around for this award.
Anyways, Aoba Suzukaze is a high school graduate who joins Eagle Jump – the video game company that produced her favourite game. Despite going into the world of adult employment, her appearance often results in people mistaking her for a middle school student – much to her chagrin.
Runners-up: Ruby Kurosawa (Love Live! Sunshine!!); Erica Ainsworth (Fate/kaleid liner PRISMA ILLYA 3rei!!)

Now here’s two people destined for each other

Though NEW GAME! never explicitly states that these two are a couple, the fact they act like they’re married should probably clue you in on their relationship. There’s the time Aoba caught them together in a suggestive position, they went to a hot spring together and Ko tended to Rin when she fell ill. What more can be said, really?
Runners-up: Mari Ohara & Kanan Matsuura (Love Live! Sunshine!!); Hikari Kohinata & Futaba Ooki (Amanchu!)

Dragon Ball Super continues to bring some thrilling battles, with this one being something of a highlight. Goku, Vegeta and Future Trunks travel to Future Trunks’ time period in order to take on a clone of Goku and an immortal. Vegeta’s quickly taken out of the fight, but Goku and Future Trunks fare a little better – we even get to see Future Trunks use Final Flash. Despite their best efforts, Goku and Future Trunks are ultimately unable to claim victory in this fight.
Runners-up: Illya vs. Kuro (Fate/kaleid liner PRISMA ILLYA 3rei!!); Mob vs. Koyama (Mob Psycho 100)

The series about the school idols has a pretty great soundtrack, of course. Aquors’ songs are all pretty great, and I did like Saint Snow’s performance as well. The video above is for ‘Omoi yo Hitotsu ni Nare’, which features during an episode focusing on You. It’s just one example of the many enjoyable songs Aquors performs during Love Live! Sunshine!!.
Runners-up: JoJo’s Bizarre Adventure: Diamond is Unbreakable; Qualidea Code

The ending of Love Live! Sunshine!! sees Aquors supported by all the students of their school, and a heartfelt pre-show performance covering how Aquors came into being and the trials they had to overcome. This is all capped off with a performance of ‘MIRAI TICKET’.
Runners-up: Release of Fairies Story 3 (NEW GAME!);

The ending theme for Dragon Ball Super is probably the catchiest one there is this season, and I love it. Just listen to it, since I don’t really have much else to say here.
Runners-up: “Miss Rabbit” by Erabareshi (Time Travel Girl); “clever” by ClariS x GARNiDELiA (Qualidea Code) 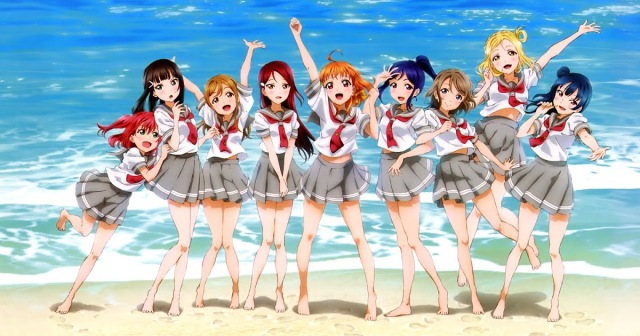 There has been some top quality entertainment this season, and that makes it harder for me to identify a specific show; however, I have done exactly that after much deliberation.
Love Live! Sunshine!! shows us Chika’s journey to become a school idol, resulting in the formation of Aquors. It gave us plenty of funny moments, an interesting cast of characters and many emotional scenes. Of course, the music was pretty good as well. I also really how it addressed Chika’s growth as a character, particularly concerning her inspiration for becoming a school idol.
Runners-up: NEW GAME!; Fate/kaleid liner PRISMA ILLYA 3rei!!

With that, I have finished this season of anime. It’s been pretty great, with many great shows as you can see from the variety of them featured here. Next seasons promises a few magical girl shows, so I’m more than ready for that.
Oh, and I think Thunderbolt Fantasy deserves a special mention – it’s a puppet show rather than an anime, but I strongly recommend checking it out. Yet another Gen Urobuchi creation I really like.