We’ve had Poppin’ Party, Roselia and Hello, Happy World!, so now it is Pastel * Palettes’ turn to have the spotlight shone upon them. And the stage where said spotlight is shining is none other than the World Idol Festival. 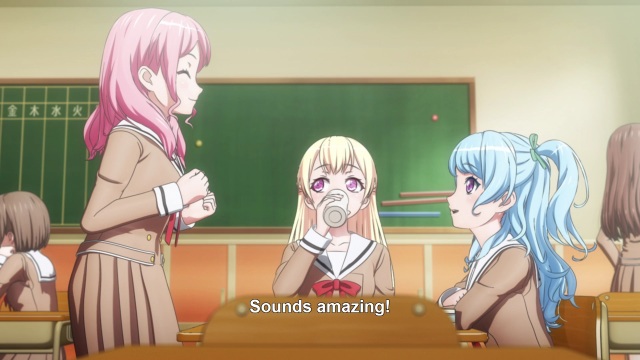 Aya, Chisato and Kanon talk about the upcoming World Idol Festival, or WIF for short

Pastel * Palettes have a big show coming up; they shall be performing at the World Idol Festival. On their setlist is the song “Yura-Yura Ring-Dong-Dance”, which is a duet between Aya and Chisato. Aya is quite keen to practice it. Chisato, on the other hand, is not. 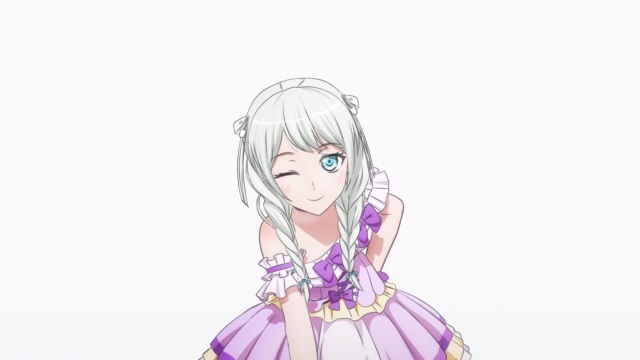 Let’s all take a moment to just appreciate Eve

There’s a whole load of preparation for Pastel * Palette’s upcoming show, including photo shoots and of course actually practicing their performances. Eve has it easy; she is a former model, after all. Chisato doesn’t stick around, though.
Chisato also happens to be an actress on top of an idol, and she is filming something so her schedule is quite full. After the photo shoot, she takes off to do more filming.

Chisato’s filming is delayed by a couple of hours, so she decides to make her way to a studio. She is actually useless when it comes to catching trains, but a coincidental meeting with Tae soon sees Chisato on the right track.
Turns out Tae actually works at the studio where Chisato made a reservation, amusingly enough. Actually, Chisato tells Tae to keep her visit to the studio a secret.

Maya and Hina, the drummer and guitarist of Pastel * Palettes respectively

Chisato is able to make it to a Pastel * Palettes practice session, but completely denies Aya any chance of practicing “Yura-Yura Ring-Dong-Dance” together. Instead, they opt for “Pasupa Revolutions☆”, which plays over a montage of Pastel * Palettes preparing for their upcoming show.

Maya notices that Chisato has worn down her bass’ strings

During one particular practice session, Hina is able to pick up that something is off with the sound of Chisato’s bass. Maya inspects, and sees that the strings have been worn down. She offers to replace them for Chisato. 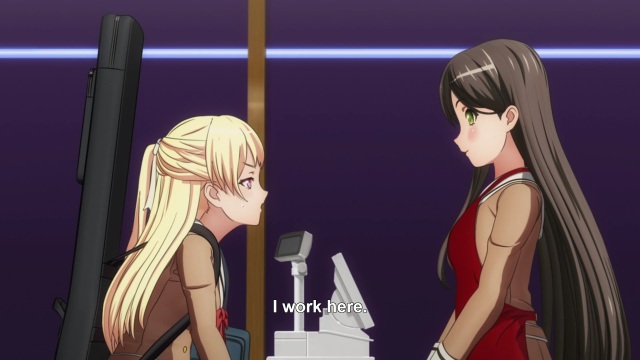 As the day of the show draws nearer, Chisato continues her solo practice. She makes a reservation at another studio, and discovers that Tae works there as well. Chisato tells Tae about her duet with Aya, and Tae mentions how that she takes over when Kasumi struggles to sing and play at the same time. However, Chisato doesn’t feel like she is ready to do the same thing with two vocalists.

At school, Tae is about to spill the beans about Chisato to Eve. However, Chisato appears out of nowhere, and takes Tae aside. She gives her bunny tail pastries – a bribe. Tae realises this fairly quickly.
However, their little interaction doesn’t go unnoticed: Kasumi and Eve decide to spy on them to figure out what is going on.
After that, Eve tell the other members of Pastel * Palettes about it. They are worried it might be a scandal, but Chisato puts that fear to rest. However, she still refuses to practice “Yura-Yura Ring-Dong-Dance” properly.
Aya is worried that it might be because she isn’t good enough, but Maya mentions how Chisato wore her bass strings down.

Aya dashes out to find Chisato, and tells her that she will wait until Chisato thinks she is good enough for them to sing together. Chisato feels like Aya finding her is the opposite, but things work out for them in the end. The rest of the band show up, and they go to practice.
Following that, it is time for Pastel * Palettes’ performance at the WIF.

Another girl who stands out in a crowd. Hmm…

Pastel * Palettes are able to put on a good show, and perform “Yura-Yura Ring-Dong-Dance” without any troubles.

That wraps up this episode. Looks like the anime favours the AyaChisa ship for Pastel * Palettes this time round. As for me? I’m more KaoChisa, particularly since the in-game event that had Kaoru and Chisato perform in Romeo & Juliet together. Chisato is also Kaoru’s childhood friend, and the only one capable of making Kaoru blush.

I also find Chisato to be one of the more frustrating characters in BanG Dream!. From this episode, I wish she would have been more open about her solo practice. She made Aya feel worthless, and its only thanks to Eve, Hina and Maya that Aya was able to pick herself back up.
Chisato’s initial introduction in Pastel * Palettes’ origin story in the game is also not the greatest. Admittedly she’s better now, fortunately.

Going back to ships, I don’t really have an OTP for Aya. She ships pretty well with any other member of Pastel * Palettes, though if pushed I’d probably pair her up with Hina.

Eve is probably my favourite member of Pastel * Palettes. She’s the token foreign character, hailing from Finland. She is absolutely obsessed with Japanese culture, and that mix of things just makes her extremely loveable.
Got to show some appreciation for Maya, too – her laugh is great. On the subject of Eve and Maya, I ship them together because of one of the one-panel comics from the game:

For the record, Maya’s second name is Yamato, hence why she’s taking Eve’s desire as a proposal.

This episode referenced Pastel * Palettes’ origin story; more specifically, their disastrous first gig. We got a simplified version of what happened here. For more details, you’d have to check out Pastel * Palette’s story in BanG Dream! Girls Band Party!.

Tae showing up wherever Chisato went was pretty amusing, and I liked Chisato turning it around to give her a bribe later on.

A decently enjoyable episode. Perhaps there are bigger Pastel * Palettes fans out there that enjoyed it more than me, but it was still fun. Poppin’ Party didn’t get to do a whole lot during this episode, but at least Tae had some funny moments.

I am very much looking forward to the next episode, though, as Afterglow will be the focus there. Hopefully we’ll see some MocaRan and TomoHima.