Right, the winter anime has finished. That means I’ll be handing out imaginary rewards to the shows I’ve been watching – there’s not much prestige for my personal anime awards, but it’s just a bit of fun for me to share my thoughts on the season. Anyway, here’s what I watched during this season:

So there’ll potentially be spoilers for any of the shows listed above – just a friendly warning before I get into it. Also, I want to mention that Go! Princess PreCure finished right at the beginning of the season, in January – Maho Girls PreCure! took over its timeslot. With that said and done, let’s dive right in.

The opening theme for Dragon Ball Super has really grown on me, hence the recognition for it here. In my humble opinion, this song is at least equal to ‘Cha-La Head-Cha-La’, if not better.
Runners-up: “QUESTION” by 3-nen E-gumi Utatan (Assassination Classroom: Second Season); “Dokkin♢Mahoutsukai PreCure!” by Karin Isobe (Maho Girls PreCure!)

This isn’t the only award Pandora in the Crimson Shell: Ghost Urn will be receiving…

A story of ‘girl-meets-girl’, or so it’s said during an opening narration for one of the episodes. Those two girls, Nene and Clarion, also happen to get involved some rather dangerous situations whilst they try to protect the peace of Cenancle Island.
Runners-up: GATE, Fairy Tail Zero

Looks innocent enough, but do not harm Clarion when she’s nearby.

A full-body cyborg girl who wants world peace. She also adores cute things, and share a special bond with fellow full-body cyborg Clarion. She also happens to be an Adepter, and can use something known as the ‘Pandora Device’ to achieve incredible feats, within a time limit.
Runners-up: Mavis Vermilion (Fairy Tail Zero), Monkey D. Luffy (One Piece) 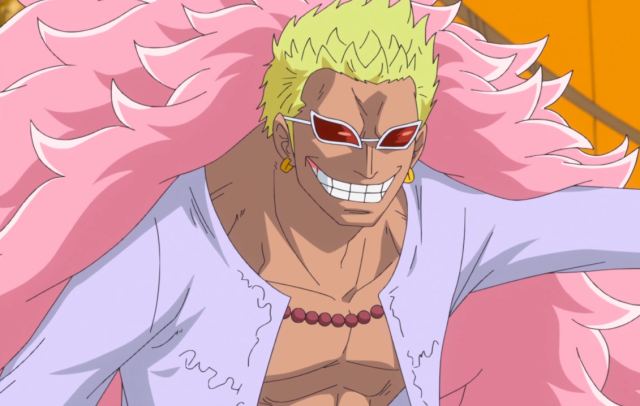 Rarely seen without that smug grin.

The big bad of the Dressrosa arc, and one of the seven warlords of the sea. He has eaten the String-String Devil Fruit, allowing him to manipulate strings. This means he can make people his puppets, and he can use the strings offensively. Oh, and he has also ‘Awakened’ his Devil Fruit powers, making a fearsome foe. Doflamingo is an utterly despicable person – you know, the type that tend to make the best villains.
Runners-up: Reaper (Assassination Classroom: Second Season); Close (Go! Princess PreCure)

Just a few of the residents of Cenancle Island

Nene and Clarion are great, but so are the other characters they interact with. Whether it’s the adorable Amy, or the brilliant Uzal, the varied characters who live on Cenancle Island certainly make for an interesting and memorable bunch.
Runners-up: Maho Girls PreCure!, Assassination Classroom: Second Season 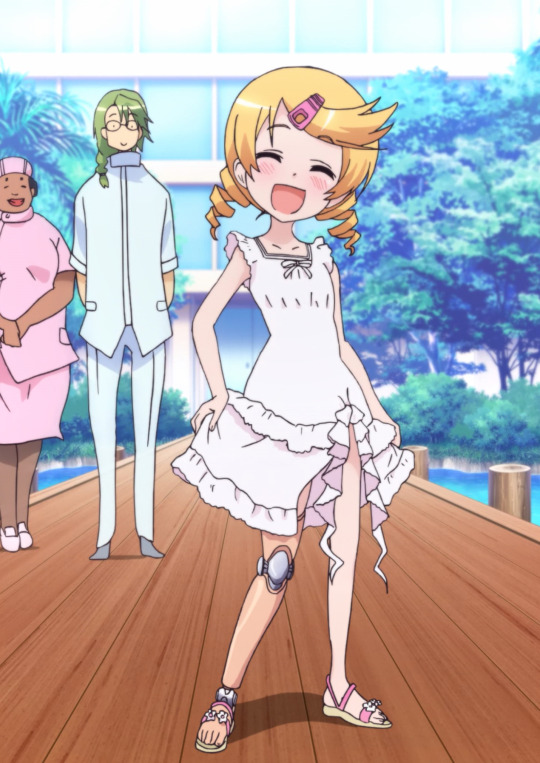 Amy with a new prosthetic, and the dress Nene fixed for her

From Pandora in the Crimson Shell: Ghost Urn, a young girl who lives on Cenancle Island. She has a prosthetic leg, and a pet cat called Lean. Despite her disability, she’s a cheerful lass. Being cute, Nene adores her as soon as they first meet.
Runners-up: Mavis Vermilion (Fairy Tail Zero), Haa (Maho Girls PreCure!) 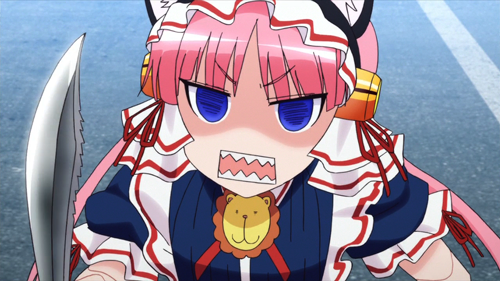 Never try to bring harm to Nene when she’s nearby.

Nene’s partner is an adorable combat cyborg who makes protecting Nene her top priority after being instructed to do so. Being a combat cyborg, she tends to get into scraps. She fights using a pair of blades, but even losing an arm isn’t enough to stop her.
Runners-up: Tadaoka Karasuma (Assassination Classroom: Second Season); Vegeta (Dragon Ball Super)

Clarion does take some time to get used to Nene’s affection.

For Nene, it’s love at first sight when she meets Clarion. That’s not the case for Clarion at first, but she does eventually grow to accept Nene’s feelings, even if she won’t outright admit it. If someone threatens one of this pair, then expect the other to fiercely protect their partner.
Runners-up: Mirai Asahina & Riko (Maho Girls PreCure!); Yuzuka Hanami & Chiya Sakagami (Mahou Shoujo Nante Mouiidesukara)

A pretty great fight – probably best to experience it through an AMV or something, where all the non-related scenes would have been excised.

Yes, the Dressrosa is a long one, with it being stretched out as much as possible, but this battle at its climax is definitely a great one. It’s the first time we get to see Luffy’s 4th Gear, which Doflamingo counters with his awakened String-String Fruit powers. Any battle in a shonen series where new abilities are revealed tend to be memorable, and this is no exception.
Runners-up: Tadaoka Karasuma vs. Reaper (Assassination Classroom: Second Season); Vegeta vs. Otta Megatta (Dragon Ball Super)

Well, I suppose technically this should be Fairy Tail Series 2, since the last couple of episodes weren’t Zero. Regardless, it had some neat pieces of music throughout, but the return of the original Fairy Tail theme in the final episode was a highlight. That’s why I’ve included a video with it here.
Runners-up: Assassination Classroom: Second Season; Maho Girls PreCure!

This is just one obstacle Nene and Clarion have to overcome

How about a potentially world-ending event triggered by the leak of a collection of thigh pictures? That’s the climax of Pandora in the Crimson Shell. Nene and Clarion have to deal with an android called Fear, then they have to stop the out-of-control BUER that potentially involves a sacrifice.
Runners-up: Go! Princess PreCure; GATE

A catchy ending theme with a CGI dance sequence featuring Cure Miracle and Cure Magical of Maho Girls PreCure!. Made even more enjoyable with the two girls pretending that their broomsticks are guitars, and Mofurun joins in with the dancing as well.
Runners-up: “Usubeni” by LACCO TOWER (Dragon Ball Super), “LoSe±CoNtRoL” by Nene Nanakorobi & Clarion (Pandora in the Crimson Shell: Ghost Urn)

My favourite anime of this season is the one with the story of ‘girl-meets-girl’, which mixes silliness and seriousness very well. Also gives us a great pairing in the form of Nene and Clarion, and the supporting characters are pretty good as well.
One of my runners-up hasn’t even had a full season’s worth of episodes at the time of writing, but it’s just that good.
Runners-up: Maho Girls PreCure!; Fairy Tail Zero

So that’s it for the 2016 winter season. Pandora in the Crimson Shell: Ghost Urn was definitely a highlight, hence it appearing so much here. Maho Girls PreCure! has only really just started, and it’s already looking very promising. Less great is that Fairy Tail has ended for now – the Zero arc was arguably one of its best, at least for story.
Not the strongest season of anime there’s ever been, but not every one can be the strongest.