Mika’s search for that elusive spell to get her back home continues in the fifth volume of Mochinchi and Yasuhiro Miyama’s A Witch’s Printing Office manga. On top of that, she also has the appearance of a rival to deal with, and the usual high volume of work.
This volume contains chapters twenty-six through to thirty-one. 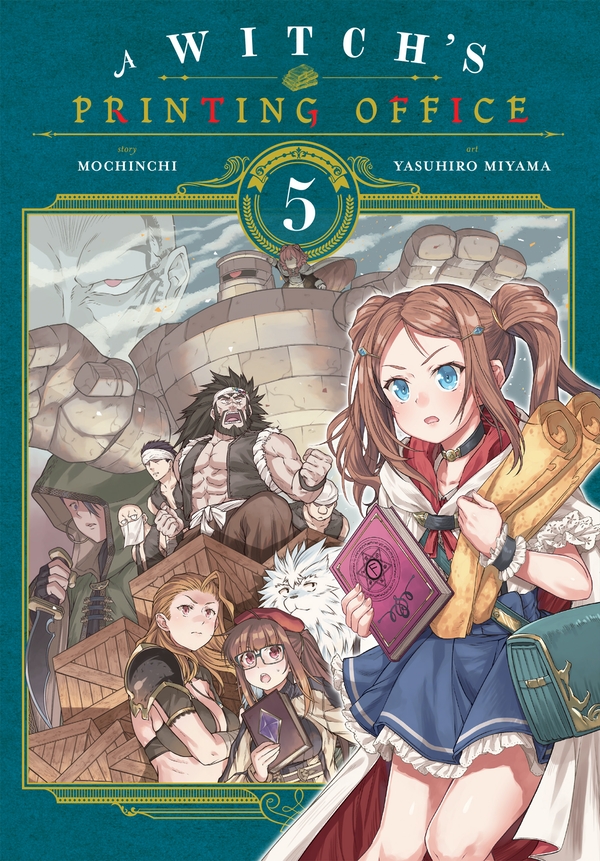 Mika has been trying to get home for a long time. But how did she first learn to wield the copy magic at the heart of Protagonist Press, and how did she meet Kiriko and Lio? As the group reminisces, new challenges keep their focus on the present – including a rival printing press, an assassin, as well as an ancient and powerful threat!

This volume of A Witch’s Printing Office starts with some mountain bandits coming to terms with the lack of people crossing their mountain. Rumours of Magiket catch their attention, and a chance meeting sees them pursuing an altogether different career path. It’s quite amusing to see the result of all that.

An amusing start for this volume, then we go back to focusing on Mika. She has challenges to face in this volume, with the appearance of a rival being the first of many. Protagonist Press does not have the monopoly on printing tomes, although there are some times when the expectations of their customers are impossible to meet. That holds true for their rival as well, though.
Plenty of amusing stuff comes from the focus in the present, buy perhaps the most notable thing to come from this volume is a glimpse into Mika’s previous world.

We are taken back to the past, and shown how Mika first came to get into Comiket. It may only be a fairly brief stint down memory lane, but it still is nice to see how things were where Mika originally came from.
That’s not the only flashback we get in this volume, though. We are shown how Mika first met Kiriko and Lio. To put it plainly, she was a victim of unfortunate circumstances – much like Kiriko and Lio were as well. It did bring them all together, though, so there was definitely some good to come out of all that.

Lots of really fun stuff in this volume of A Witch’s Printing Office, and we get some nice subverted expectations. It’s not just the reader’s expectations that get subverted, either. Silly stuff, maybe, but exactly what I have come to expect from this manga. Had a great time reading this volume.

I enjoy writing, manga, anime and video games, so naturally here on my blog, you will find anime reviews, Nintendo news and other such things that I deem interesting.
View all posts by Rory →
This entry was posted in Manga and tagged A Witch's Printing Office, Manga, Mochinchi, Volume 5, Yasuhiro Miyama, Yen Press. Bookmark the permalink.