Hit, Maika and Kou are back to their usual antics in the fifth volume of Hideki Goto’s Splatoon: Squid Kids Comedy Show. Of course they’re joined by other Inklings, but those aren’t the only beings joining in on their shenanigans. 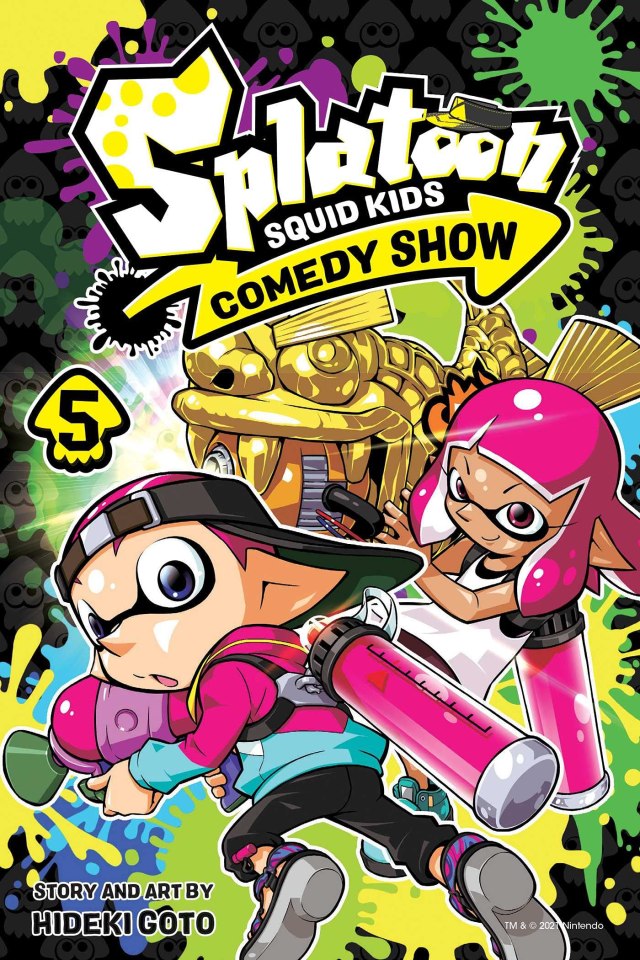 Hit, Maika, and Kou are back in the high-spirited fifth volume of stories from the world of Splatoon!

Once more, Hit and Maika are back with their boke and tsukkomi routines, with Hit usually serving as the boke. Generally most gags involve Hit doing something stupid (with Kou serving as a victim fairly often), and Maika reacting to him.
Those reactions are something else; Hideki Goto seems to have a talent for drawing the most insane reaction faces.
Things get pretty seasonal in this volume, as we have events that take place during Christmas and Valentine’s Day. There’s plenty of winter and spring themed chapters in this volume.

The gags featured here… something actually got a genuine laugh out of me. Much like with earlier volumes, it is the jokes that are actually kind of dark if you stop to really think about it that I enjoyed the most. Much of these jokes come from the inclusion of the Salmonids from Splatoon 2‘s Salmon Run mode. It’s made clear in no uncertain terms that they will eat the Inklings given half a chance – and they have plenty of chances in this volume.

Of course this is a comedy manga, so status quo does get maintained. Would feel really odd to actually kill off one of the central characters. Though I’ll admit I wouldn’t miss Kou at all if he were to suddenly disappear…

Another does of Splatoon based silliness from Hideki Goto here. Some jokes fell flat, but I’d say things were more on the funnier side in general.

I enjoy writing, manga, anime and video games, so naturally here on my blog, you will find anime reviews, Nintendo news and other such things that I deem interesting.
View all posts by Rory →
This entry was posted in Manga and tagged Hideki Goto, Manga, Splatoon: Squid Kids Comedy Show, Viz Media, Volume 5. Bookmark the permalink.