Better strap in for this one, because the forty-fourth episode of Tropical-Rouge! PreCure is quite the wild ride. Much of the past that has been hinted at previously comes to light here.

Cure Summer delays the destruction of the world – for the moment, at least

The past that the Legendary Pretty Cure and the Witch of Delays share is finally revealed in this episode – from their first meeting, to the Witch’s reason for bringing eternal delays to the world. Laura reveals all this information to the other girls, whilst the Witch of Delays herself steadily remembers everything. PreCure confronts the Witch, and makes her face the very thing she had been delaying. 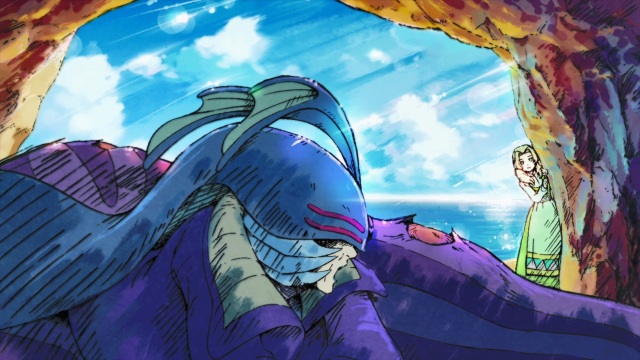 Aunete meets the Witch of Destruction

So here we have it: the fateful first meeting between the Witch of Destruction, and a girl named Aunete. Aunete helped her out, not knowing who she really was. That act of kindness had an impact on the Witch. Also, definitely want to take a moment to just say that Aunete is so cute.

Aunete’s gift to the Witch – a red anemone, which can apparently symbolise death or a forsaken love

I assume Aunete made multiple visits to the Witch in the cove she washed up in, but obviously there’s only so much that can be fit into a twenty-four minute episode. For a while, it seemed the Witch of Destruction was content to step away from the role she was born into – until she recovered fully from her injuries, at least. 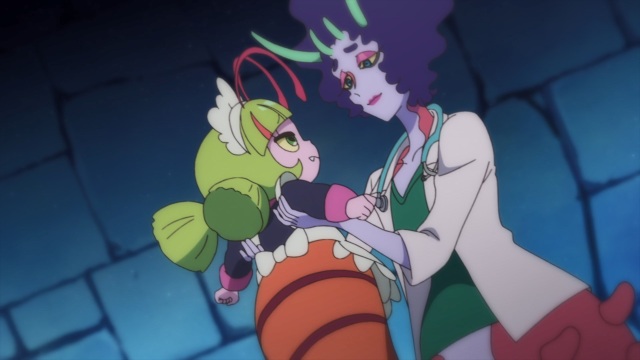 With the Witch’s past made clear, Pretty Cure now know what they need to do – and not even Yarane-da Chongi-re can put a halt to them – he’s dealt with pretty swiftly, considering.

It only took her forty-odd episodes, but the Witch finally gets up – and sure enough, things get serious. She intends to carry out the destruction she delayed for so long – delayed so much, that she even forgot what she delaying in the first place.
So she was not a victim of the mermaid’s memory erasure, and that helmet she wears is not some sinister device. She was just born into the world as the Witch of Destruction, and was going to fulfil that role until Aunete showed her kindness.
Some proper fantastic tragic villain stuff going on here.

The Witch and the Cure

I love Cure Summer’s badass walk towards the Witch shortly before the Witch’s story is brought to its resolution. It’s a superb way to bring this particular plot thread to an end – I definitely agree with both Summer and Chongi-re’s thoughts about the matter.
However, not everyone is thrilled about the development.

As I’ve been suspecting, it appears that Butler will serve as the final boss for this season. I thought he’d betray the Witch in some fashion for that position, but nope, he is just incredibly loyal to her – specifically, the Witch of Destruction. He will carry out the destruction of the world that she wasn’t able to.

What an incredible episode. Tropical-Rouge! PreCure is certainly proving itself as one of the best seasons of Pretty Cure. We got some fantastic themes even from just this episode alone. Absolutely adored the way in which Witch’s plot wrapped up.

Next time, the Cures still have one foe to overcome.