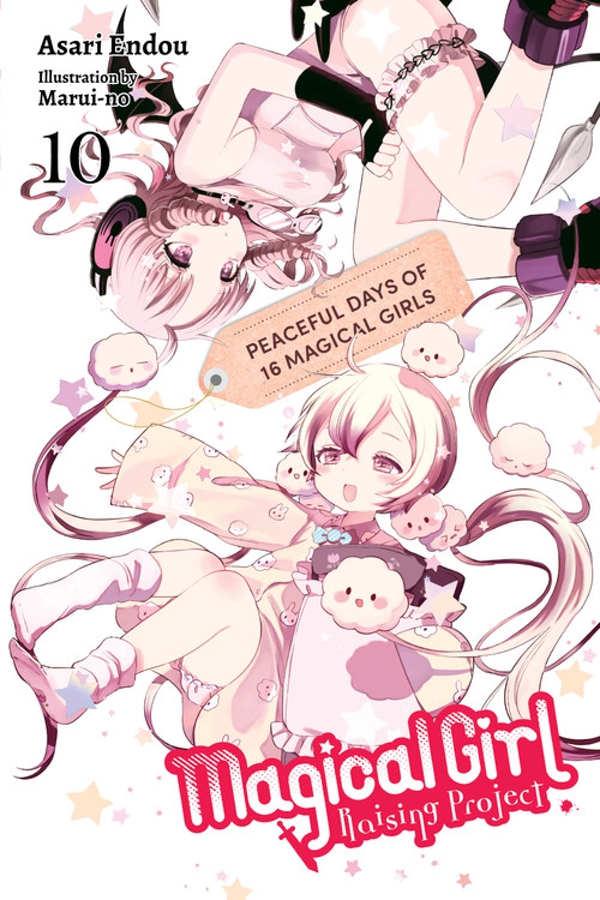 REVISIT THE ORIGINAL SIXTEEN!
Learn more about the sixteen magical girls from the very first Magical Girl Raising Project in this short story collection that perfectly complements the hit anime series. You’ll read about the girls’ normal, everyday lives, some surprising interactions, and even events that took place before the game’s start! These sweet vignettes are positively bursting with magical-girl charm!

The tenth volume of the Magical Girl Raising Project light novel series really stands out, because it is the only one that has a white cover. The rest have been black.
It is also the only one that is closely tied into the anime adaptation. Each short story begins with a “spoiler-o-meter”, suggesting which anime episode you should watch first before reading.
For example, the first story, The Lady Knight’s Lonely Battle: Director’s Cut, should be read after watching the first episode of the anime.

On that note, I personally don’t think Peaceful Days of 16 Magical Girls starts on a very strong note. The Lady Knight’s Lonely Battle: Director’s Cut is pretty much about La Pucelle battling lewd thoughts about magical girls, and that’s not something I find to be all that compelling.
Fortunately, the stories do get more interesting pretty quickly.

As with any anthology collection, there are stories that stand out more than others. My favourites from this particular collection include Top Speed’s Top Speed, The Prince of the Club, Conditions for an Anime Adaptation, Alice in Hardgore Land, It Happens from Time to Tama, and An Interview with Swim Swim.
Those stories do also happen to feature the magical girls I favour from the first Magical Girl Raising Project, so that definitely plays a part in my bias towards them. Something like The Prince of the Club is interesting, though, as it delves into how Sister Nana and Weiss Winterprison first met.

Another nice thing about this collection of short stories is that we get to spend more time with some of the magical girls who only got a tragically short part in the first light novel/anime. There’s some genuinely sweet moments for certain characters who deserve them, and a fair bit of humour to go around, too.

As a companion to the anime, Peaceful Days of 16 Magical Girls is a really nice way to expand even further upon the characters. As I already mentioned some stories are better than others, but I feel they tend more towards the positive side for me personally.
Although I suppose it’s also quite a bittersweet entry into the Magical Girl Raising Project series as well, for various reasons. Still a worthy addition to the collection, though.