Manatsu is excited to pet some dolphins in the twenty-seventh episode of Tropical-Rouge! PreCure. Something strange is happening at the aquarium, though, so the Tropical Club investigates.

Now, is Manatsu talking about connecting with the dolphins, or does she perhaps have a certain mermaid “sea friend” in mind? OK, it’s probably the dolphins, but I’d like to think this is also a tease of the latter.
Anyways, the Tropical Club visits the aquarium in this episode, with Manatsu eager to pet some dolphins. There’s something strange going on there, though, and an investigation turns up the enemy. PreCure take them on, with a little help. 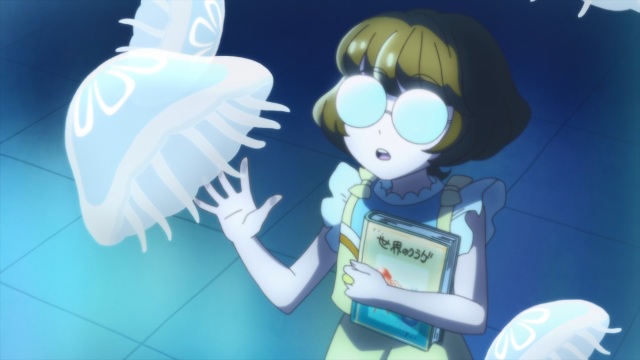 Huh, apparently dolphins feel like aubergines. Never touched a dolphin myself, so I have no idea how accurate that is – the episode doesn’t follow up on that statement, either.
Minori being into jellyfish brings to mind Revue Starlight‘s Hikari Kagura; I’d bet the two of them would get along.

With the dolphin petting zoo being so busy, this episode has the Tropical Club going around the aquarium, eventually realising that something strange is happening as many of the guests are running low on motivation.

The Tropical Club arrive for the aquarium’s night tour

I feel like it might’ve taken the Tropical Club a little longer than necessary to find out where the cause of the strange goings-on are. Motivated guests were going into the dolphin petting zoo, then leaving drained of all motivation. Definitely seems like something that at least Minori could’ve figured out…
At least Laura was able to turn up something by searching the tanks. We also have an appearance from Kururun, which feels kind of rare lately.

Interesting how the dolphin trainer’s motivation was not stolen right away, despite being the closest in proximity to the Zettai Yarane-da. Maybe he had strong motivation or something, I don’t know.

OK, seeing PreCure team up with the dolphins was pretty neat. It’s always nice to hear “Achieving victory with this joyful power!”, too. Definitely one of my favourite songs from the Tropical-Rouge! PreCure soundtrack.
I wonder how long we’ll need to wait until we see a special attack from the Tropical-Rouge Cures that involves all five of them. I’m surprised we’ve come this far without getting one.

Overall, a good episode. I had fun watching it.
Next time, a cultural festival.