The ninth episode of Miss Kobayashi’s Dragon Maid S shines the spotlight firmly on Elma. She’s fighting, going on a picnic, and then fighting again, but in a different sense.

This Elma episode starts with the adaptation of chapter 55, “Elma & The Freedom Movement”, from the sixth volume of the manga. This one has quite a notable difference between anime and manga versions: Miss Kobayashi provides narration in the anime, whilst it’s just the typical dialogue in the manga. 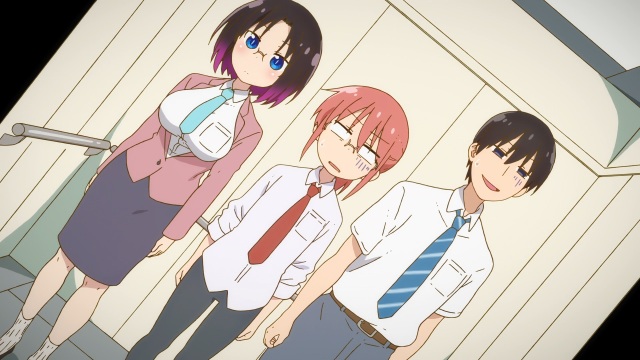 Elma, Miss Kobayashi and Takiya are called to the executive director’s office

Elma meets with several obstacles, but she remains determined – even bringing in some help from a certain maid dragon, much to Miss Kobayashi’s surprise. Interestingly, her invasion of privacy is never mentioned in the manga, even though she does use her clairvoyance. The manga settles for comparing Elma to a PC with a high spec GPU.

Some small visitors show up on Elma’s doorstep

The second part of this episode takes us into volume 7, adapting chapter 59, “Elma and the Picnic”. Kanna, Saikawa and Shouta need someone to chaperone them on a trip to a mountain, and Elma just so happens to be free.
Some small differences between manga and anime here. Shouta uses the sun rather than ley lines to tell where he’s going in the manga. That one bear Elma encounters isn’t carrying a fish in the manga, either.

In the manga, Kanna actually gives Elma and Saikawa the same type of flower. Either way, Elma enjoys the nectar, though.
We then move on, to perhaps one of the chapters I was most hoping to see adapted.

Another one from the seventh volume of the manga, chapter 64, “Elma and Tohru”, has Elma dropping by the Kobayashi’s place to ask Tohru to train with her. That part is not in the manga; the chapter starts with Tohru and Elma facing off, whilst Miss Kobayashi and Fafnir watch on.
Once again, we see some incredible animation on display here as Tohru and Elma fight. Elma’s reasoning for the so-called “training” is great, too.

This episode is arguably the best that we have gotten from season 2 so far, and I’d like to say that is courtesy of Elma. Her dynamic with Tohru is great, and it is a delight to finally see their “fight” animated. Excellent stuff.

I enjoy writing, manga, anime and video games, so naturally here on my blog, you will find anime reviews, Nintendo news and other such things that I deem interesting.
View all posts by Rory →
This entry was posted in Episodic and tagged Elma, Episode 9, Kanna, Miss Kobayashi, Miss Kobayashi's Dragon Maid S, Tohru. Bookmark the permalink.