In the eighth episode of Miss Kobayashi’s Dragon Maid S, we get father’s day, nursing and a lost doll.

First, we have what I believe to be another anime original story, focusing on Shouta. He wants to make a talisman as a Father’s Day gift, and is determined to do so on his own. I don’t have particularly much to say about this part of the episode, because it’s anime original (I think) and I don’t particular care for the Shouta and Lucoa parts of the show. It was nice to see him interacting with Takiya through a game, though.

The second part of this episode takes us back to adapting the manga, and we delve into volume five for this one. Chapter 42: “Tohru & Nursing” is adapted here. With Miss Kobayashi catching a cold, Tohru decide to nurse her, after getting some advice from her fellow dragons.
There’s some minor differences between manga and anime here; first one is the meal Tohru makes for Miss Kobayashi – there’s no Pocky in it in the manga whatsoever.

Tohru wipes Miss Kobayashi down in both manga and anime, but manga reveals a bit more than the anime does. Not that Miss Kobayashi has all that much to reveal…
Events play out much the same way in any case, which gives us a couple of precious moments between Miss Kobayashi and her ever loyal dragon maid.

Interesting side effect from the medicine Tohru gives to Miss Kobayashi

That brings us on to the third part of the episode, which adapts chapter 63, “Ilulu and the Doll” from volume 7 of the manga. 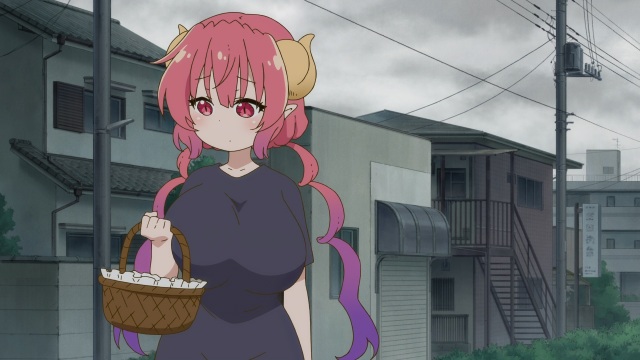 Ilulu is determined to reunite a lost doll with its owner

In this one, Ilulu discovers a lost doll and wants to reunite it with its owner. Take accompanies her, and in case it hasn’t become clear at this point, he will be featuring prominently in a lot of stuff related to Ilulu. I personally don’t care for that, but there’s no getting around it.
Anyways, differences between manga and anime: the doll is on the floor when Ilulu discovers it in the manga, Kobayashi is wearing a suit when she visits the shop and you see a lot more of Ilulu’s underwear.
Safe to say that the manga is more fanservice-y than the anime.

The middle part of this episode was the best part, simply because it focused on characters I like. Well, I suppose Shouta and Ilulu can have their moments, too, but Miss Kobayashi and Tohru will always outshine them.

Looks like we’ll be seeing a lot of Elma next episode. I’m looking forward to that.

I enjoy writing, manga, anime and video games, so naturally here on my blog, you will find anime reviews, Nintendo news and other such things that I deem interesting.
View all posts by Rory →
This entry was posted in Episodic and tagged Episode 8, Episodic, Miss Kobayashi, Miss Kobayashi's Dragon Maid S, Summer 2021 Anime, Tohru. Bookmark the permalink.