Manatsu’s class are being observed by their parents in the twenty-fifth episode of Tropical-Rouge! PreCure. It is not just the students who are under observation, though.

In this episode, Manatsu’s class will be observed by their parents. Their teacher, Ms. Sakuragawa, reveals she will also be observed by her own father. The Tropical Club decide to help out their nervous teacher, although jumping to the wrong conclusion about the reason behind the visit only adds to the pressure.
Interesting how Laura considers the Mermaid Queen “like” a mother. That has left me curious about her actual parents. 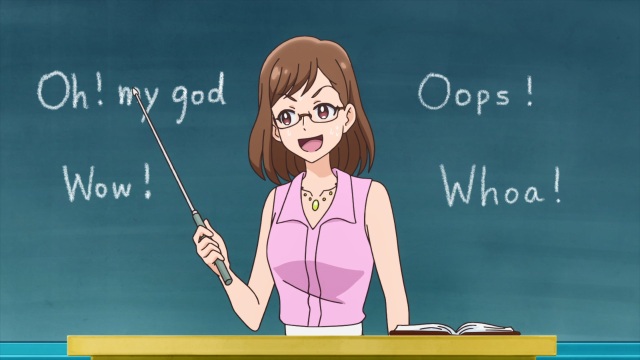 That’s some interesting English that Ms. Sakuragawa is teaching there…

This episode doesn’t particularly offer anything new in terms of setup; it’s the typical thing of people overthinking something, only to discover that they jumped to the wrong conclusion in the end. Though it may feel familiar, this episode does prove to be entertaining enough, though. 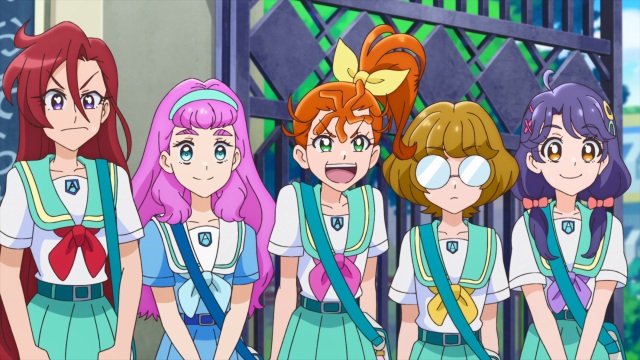 Despite her best efforts, Ms. Sakuragawa can’t really hide her clumsy nature. Though I’d suspect that her father is probably well aware of how she really is. It’s the Tropical Club that can be considered responsible for her nerves; she might’ve fared a bit better if they didn’t put the idea of her being evaluated as a teacher into her head.

Seems like Manatsu’s class and Ms. Sakuragawa are not the only ones under observation in this episode. Elde is accompanied by Numeri when her time comes to gather Motivation Power. Of course her target happens to be the school, because apparently the antagonists are incapable of finding Motivation Power far, far away from wherever PreCure happen to be.

The fight against the Zettai Yarane-da is pretty typical stuff. That brings us to the end of the episode, and I’ve got to say, the punchline of this whole episode is great.

Finally, one last thing. It has been reported that Rina Hidaka, voice actress of Laura, has been diagnosed with COVID-19. Here’s hoping she makes a swift recovery.