The seventh episode of Miss Kobayashi’s Dragon Maid S sees one dragon doing a favour for another, a discussion regarding the need for sleep and a spot of ghost hunting. 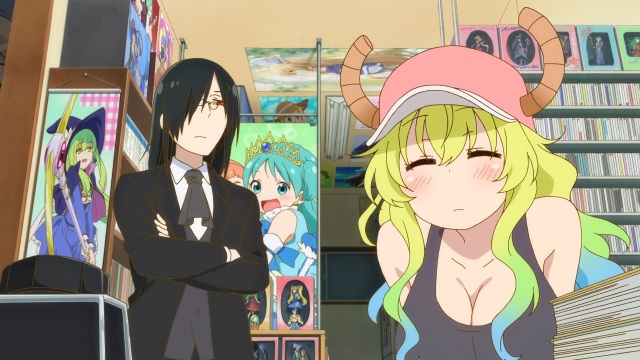 Fafnir wants Lucoa to be a model for his manga

This episode starts off with adapting a chapter from the seventh volume of the manga: chapter 61: “Fafnir and Lucoa”. I’m sure you can probably tell from the title exactly who is involved for this first segment of the episode.
It’s a funny segment, and also a rare opportunity to see some interaction between Fafnir and Lucoa. As it plays out pretty much the same way in both manga and anime form, there’s not much for me to add here.

Tohru waits for Miss Kobayashi to wake up

For the second part of this episode, we go back to the fifth volume of the manga, and chapter 41: “Tohru & Sleep”. This one provides some rather interesting insight into the reasons why the dragons that have come into the human world find themselves with the need for sleep.
There are also some minor differences to report, here. First, Tohru mentions a “Medea” when talking about Fafnir in the manga. A colleague of Fafnir’s, and one who put him to sleep to steal treasure.
Next, Kanna and Ilulu are actually sleeping under Miss Kobayashi’s covers in the manga, as opposed to the side of her bed like in the anime. 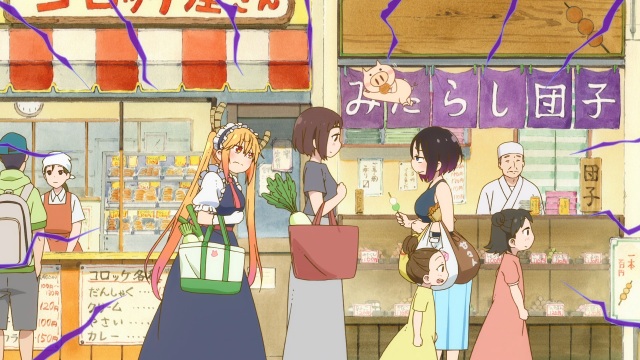 Tohru is less than pleased to see Elma

I enjoy Tohru’s interactions with Elma, and we get a little more of that in this episode. She discusses the need for sleep with her, and how it may be due to boredom. That may not necessarily be a bad thing, though. Miss Kobayashi also has some interesting things to say on the subject.

Just Saikawa being her usual self

For the last part of this episode, we once again have something that I believe to be anime original. Much like the previous episode, it is Kanna and Saikawa taking the lead for this particular content. However, something about it just didn’t seem to resonate with me.
As much as I adore Kanna x Saikawa, I don’t feel this particular section was a good as the one from the previous episode. Maybe due to Kanna and Saikawa’s classmates being heavily involved?
I feel like they have not quite managed to capture the feel of the manga this time around; which is strange, because they’ve shown that they are more than capable of it with the previous episode.
It’s a decent enough segment, but I can say that we have seen much better.

Overall, though, I have a positive opinion of this episode. The middle section in particular carried it, with interesting conversations about how the dragons are conforming to human norms.

I enjoy writing, manga, anime and video games, so naturally here on my blog, you will find anime reviews, Nintendo news and other such things that I deem interesting.
View all posts by Rory →
This entry was posted in Episodic and tagged Episode 7, Episodic, Fafnir, Kanna, Miss Kobayashi, Miss Kobayashi's Dragon Maid S, Quetzalcoatl Sassassul, Riko Saikawa, Summer 2021 Anime, Tohru. Bookmark the permalink.