The sixth volume of Yusuke Shiba’s manga adaptation of I’ve Been Killing Slimes for 300 Years and Maxed Out My Level introduces a character that didn’t make it into the anime. Azusa has a little adventure with the leviathan sisters, and a character who did make it into the anime is introduced after that.
This volume contains chapters thirty-one through to thirty-five. 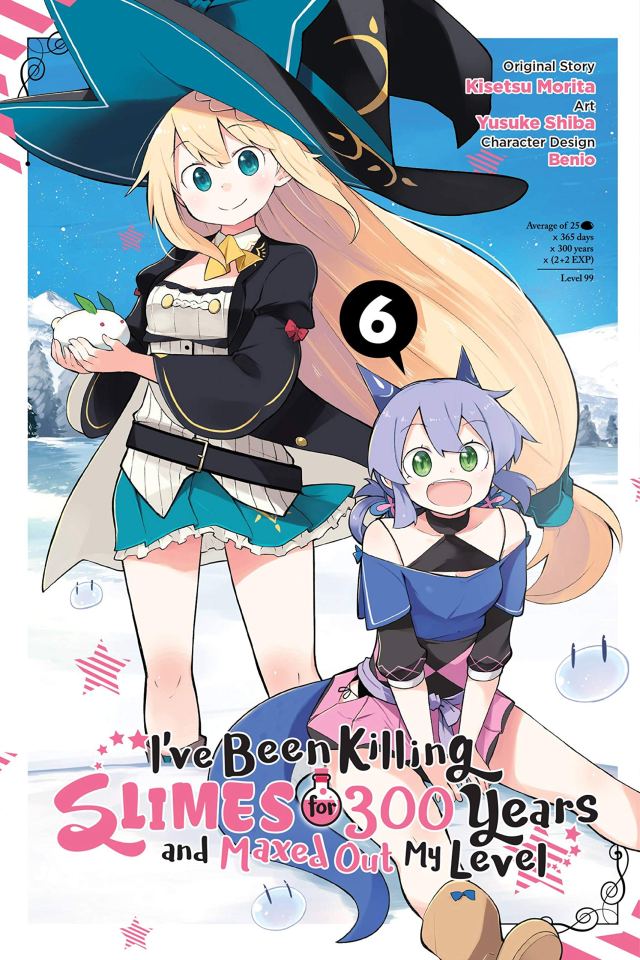 Front cover of the sixth volume of the manga adaptation of I’ve Been Killing Slimes for 300 Years and Maxed Out My Level, featuring Azusa and Flatorte

This volume of the manga starts with something that the anime didn’t do: introducing the character of Pondeli. I guess in that sense, the manga is a more faithful adaptation of the light novels than the anime is…
Pondeli’s a fun character, too, so I’m happy to see her in the manga.

That is followed up with various events leading up to Azusa ascending the World Tree together with Vania and Fatla. The anime told that particular story in one episode, but the manga opts to go for multiple chapters. Makes sense, considering there are a series of events before Azusa even arrives at the World Tree.
Regardless of whether it is light novel, anime or manga, this particular part of the story allows Vania and Fatla to get some well deserved time to shine, all whilst in the presence of a smaller Azusa. Those Gnomesform mushrooms are quite something…
The majority of this volume puts a focus on that particular tale. It’s definitely worthy of it; Azusa’s adventure with the leviathan sisters is one of the more fun events.

Talking of fun events, this volume wraps up with Kuku’s introduction – one of the side characters that they did adapt into the anime. Her introduction is something else, and I still like it a lot, despite having seen both light novel and anime versions before now.
Flatorte also gets some time to shine during that particular chapter; I appreciate seeing another side of the blue dragon.

The manga adaptation of I’ve Been Killing Slimes for 300 Years and Maxed Out My Level is still a fun read, and a pretty decent way to get into the series. Definitely earns bonus points for staying truer to the light novel than the anime adaptation.
It manages to maintain the humour of the light novels, and there are some quality reaction pictures to be found. Great stuff going on with this manga adaptation so far.

I enjoy writing, manga, anime and video games, so naturally here on my blog, you will find anime reviews, Nintendo news and other such things that I deem interesting.
View all posts by Rory →
This entry was posted in Manga and tagged Benio, I've Been Killing Slimes for 300 Years and Maxed Out My Level, Kisetsu Morita, Manga, Volume 6, Yen Press, Yusuke Shiba. Bookmark the permalink.