The different stages and new weapons make up a lot of focus of the fourth volume of Hideki Goto’s Splatoon: Squid Kids Comedy Show. Of course, Hit and Maika continue their usual antics, too. 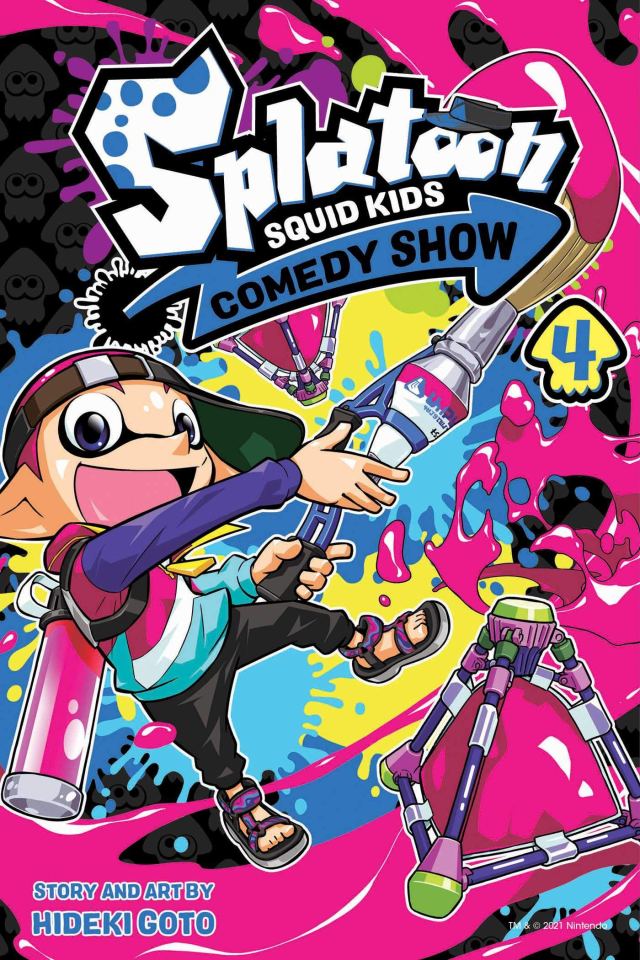 Fourth time around is the charm! Inklings Hit, Maika and Kou return for even more silly stories and fun adventures in the world of Splatoon!

I’ve mentioned before how Hideki Goto seemed to have a knack for a darker kind of humour after reading  the third volume of this manga series. Unfortunately, that seems to have been dialled back somewhat in this fourth volume.
What we do get, instead, though, is humour based upon the weapons and locations of the Splatoon games. That’s definitely something that is a lot more appealing than the gross out humour that we have seen before in this series.

With the weapons, the Inklings tend to find rather creative alternative uses for them. Nine times out of ten, this is due to Hit. He’s the “funny man” of this manga, with Maika often playing the role of “straight man”.

This volume of Squid Kids Comedy Show also sees Hit, Maika and Kou visiting several of the stages from the games, where they seem to be determined to do everything besides Turf Wars, or whatever game mode they’re supposed to be playing.
Funnily enough, the Inklings do tend to be using their stages for their original purposes rather than Turf Wars.

Another thing this volume briefly brings up are Splatfests. It has some pretty amusing takes on some of the events that were held in game; though I suspect they specifically refer to the Japanese Splatfests. Sometimes they were the same worldwide, but I very much doubt anyone outside of Japan was being asked how they preferred their red bean paste. At least, I don’t recall that particular Splatfest.

A decently entertaining volume of Splatoon: Squid Kids Comedy Show, although for me it doesn’t quite measure up to the third volume’s darker humour. Besides one running gag I’m not a fan of, this volume doesn’t really contain anything that I find off-putting.

I enjoy writing, manga, anime and video games, so naturally here on my blog, you will find anime reviews, Nintendo news and other such things that I deem interesting.
View all posts by Rory →
This entry was posted in Manga and tagged Hideki Goto, Manga, Splatoon: Squid Kids Comedy Show, Viz Media, Volume 4. Bookmark the permalink.