The Tropical Club join the broadcast committee for some lunchtime listening in the thirteenth episode of Tropical-Rouge! PreCure. Their inexperience shows, but then Laura steps up.

In this episode, the Tropical Club decide to help out the broadcast committee. Manatsu, Sango and Asuka go on their show, whilst Minori helps in the background. It doesn’t turn out too well, until Laura joins Manatsu and the others. 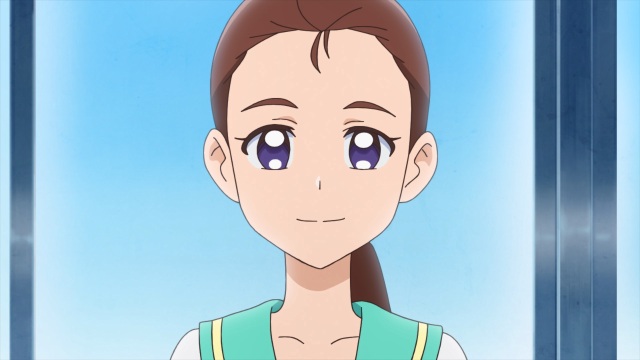 Izumi Komori from the broadcasting committee

This one is a Laura-centric episode; the usual monster of the week fight that comes later on feels secondary to the broadcasting committee stuff. We are introduced to a couple more students from the school. All the important side characters introduced from the school have been female so far; it’ll be interesting to see how long that trend keeps up.

Whilst we almost certainly won’t meet every last student at the school, it is nice to get to know a bit about those not involved with PreCure activities. 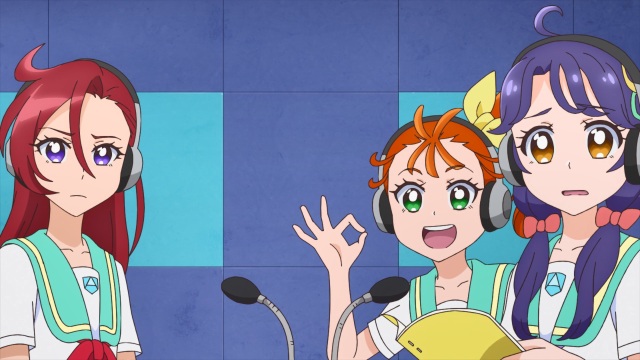 The Tropical Club end up filling in for Izumi when her stomach plays up due to eating too much parfait, and they’re about as amateurish as you’d expect. Of course Manatsu is eager to jump right in, but it seems that Asuka and Sango both have their reservations. Minori chooses to stick with behind the scenes stuff, which might be wise. 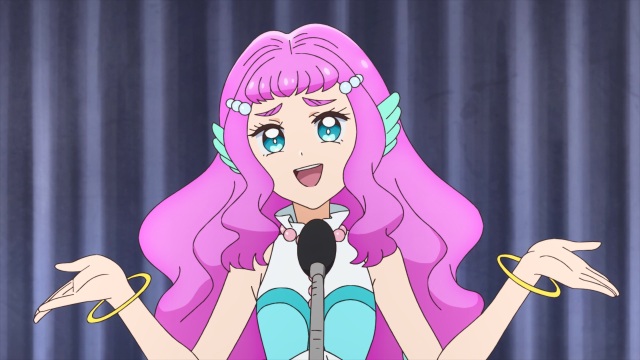 Seemingly inspired by that uniform she discovered in the previous episode, Laura throws on a long skirt and joins Manatsu and the others during their broadcast. She’s being seen by quite a few of the students at the school recently…
Well, she manages to hide the fact she’s a mermaid, and gets to sing. Shame that Manatsu and company miss out on that due to some urgent business suddenly coming up.

Chongire calls the monster of the week “Yaren-da”, but it has the Zenzen Yarane-da face… Guess it isn’t all that important, this part is pretty much just here to fill a quota. Laura and the broadcasting committee are the main focus of the episode.

Laura captivates the entire school with her singing. I did wonder how Cure Summer and the others were going to get back people’s motivation without Laura’s help, but she makes her way to the site of the battle after singing. Sure is convenient that the Aqua Pot can fly.

So maybe what they were saying about mermaids’ singing stealing people’s souls wasn’t all that far-fetched. Whatever the case may be, this was a good episode. Laura’s becoming a lot more active in and around the school. As for how long she can hide that she’s a mermaid… well, we’ll just have to see.

Next time, the Tropical Club goes to preschool.