I’ve Been Killing Slimes for 300 Years and Maxed Out My Level Episode 7: The Tea Party and Award Ceremony

Halkara’s gotten herself into a bit of a situation in the seventh episode of I’ve Been Killing Slimes for 300 Years and Maxed Out My Level, but Azusa fully intends on protecting her family. 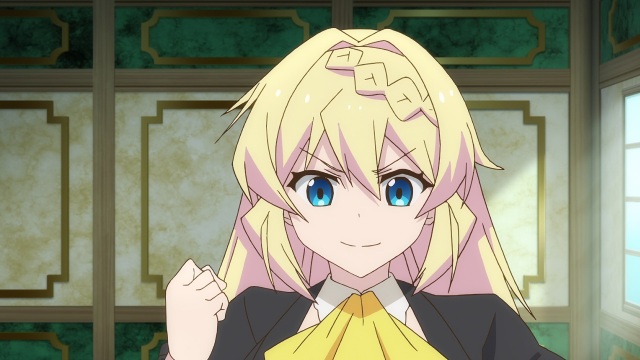 Azusa puts together a plan for saving Halkara

This episode adapts the “Whoops, I Defeated the Demon King”, “The Tea Party and Award Ceremony” and “A Second Dragon Arrived” chapters of the second light novel. Those are the final few chapters of said light novel, not including the bonus one. 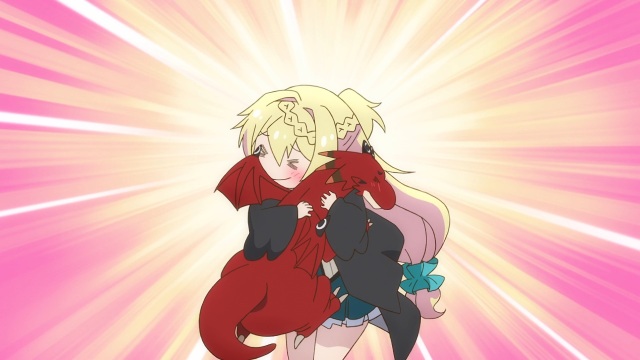 Laika reveals she has a mini dragon form

In the light novel, we get a bit more discussion of Azusa’s plan to save Halkara, whereas the anime gets right to it being carried out. We do get mini Laika in both instances, though Azusa holds herself back a bit more in the light novel upon seeing that form. 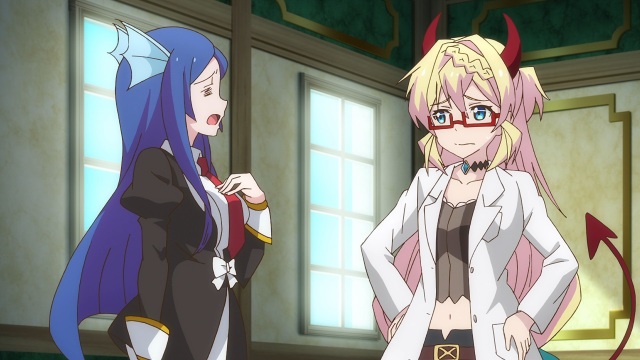 Vania brings a disguise for Azusa

Vania’s a little more gutsy in the light novel – Azusa even comments on it. She’s more panicky in the anime. Doesn’t matter, though, because in both cases the demons see through Azusa’s disguise. Or rather, she decides that they don’t buy it, so immediately goes on the offensive. 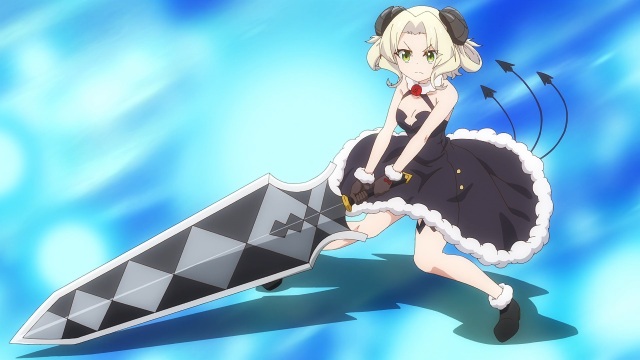 So Azusa ends up fighting the Demon King. Knowing her stats, I’m sure it’s all too easy to guess how that particular fight goes. That punch that Azusa threw felt like something straight out of Symphogear, not not just because she’s voiced by Aoi Yuuki. It’s a brief fight, but there are definitely consequences 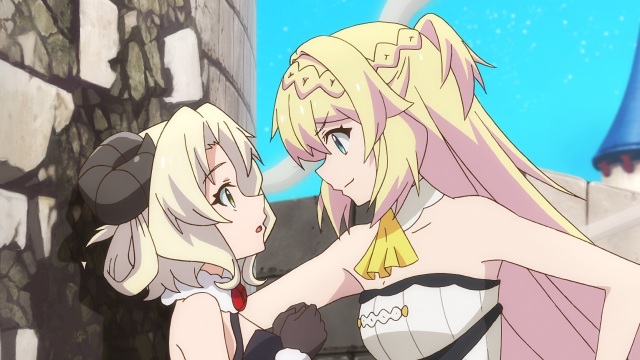 The end of the Azusa vs. Pecora battle

The anime has been pretty good at conveying Azusa’s inner thoughts from the light novel, but there’s one line that didn’t make it into the anime that I think is worth mentioning: “Come to think of it, a long time ago, I read somewhere that the more powerful a person was, the more likely they were to be rather masochistic.” Appropriate for two characters in this episode, maybe.
At this point in the light novel, Pecora asks Azusa to call her “Provat”, but Azusa settles for “Pecora” because it sounds cuter. She just jumps straight to “Pecora” here in the anime. 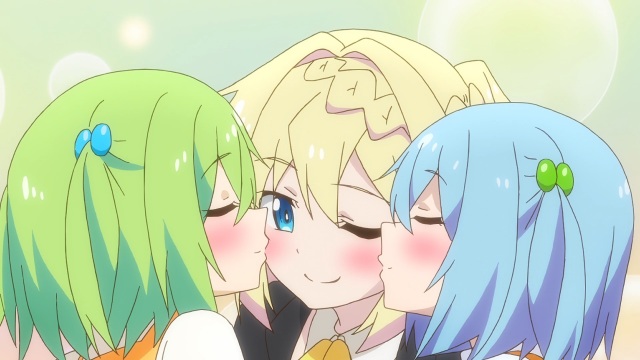 As we move on to the “The Tea Party and Award Ceremony” chapter adaptation, we get a lot of kissing talk. Azusa, Falfa and Shalsha are the only ones who get to partake, though. Unfortunate for everyone else.
In the light novel, Azusa decides to kiss her daughters by herself, whereas Falfa spurs her into it in the anime. She actually kisses Shalsha first in the light novel, followed by Falfa, and then they both return the favour.
All I know is that is is absolutely adorable; so much that Falfa and Shalsha kissing Azusa was illustrated in the light novel. 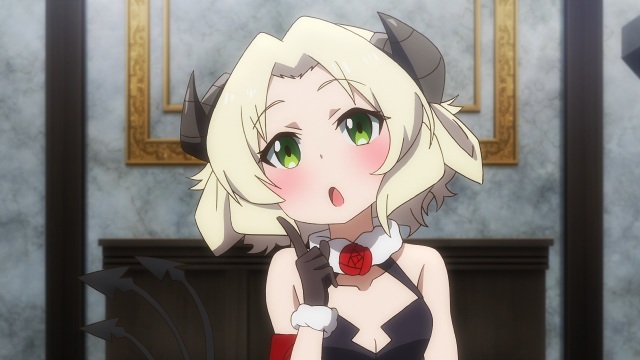 Pecora has an idea

There’s a bit more to the award ceremony in the light novel, but I can appreciate the anime just cutting to the chase. That does result in the introduction of a certain character coming a little later, but it is what it is. Pecora has quite the surprise in store for the ceremony, and even more mischief beyond that. 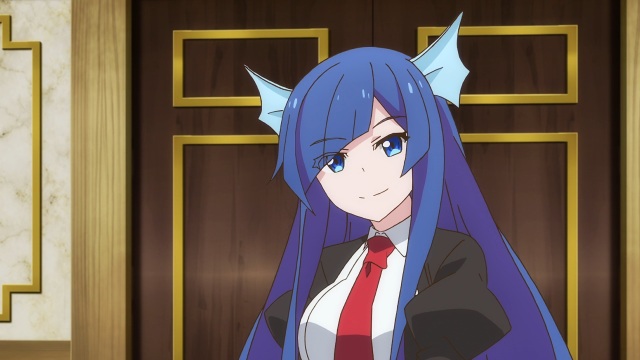 Fatla is introduced in her human form in the “The Tea Party and Award Ceremony” chapter of the light novel, but here in the anime she isn’t revealed until Azusa and her family are on their way back home.
That happens during the “A Second Dragon Arrived” chapter, which is the last chapter of the second light novel. You know, besides the bonus chapter. It is Fatla who gets covered in the honey water in the light novel. 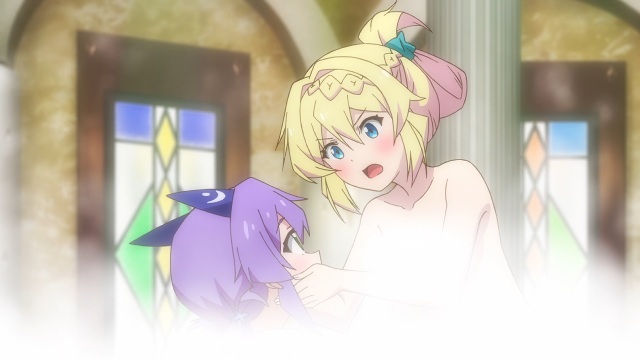 In the anime, it’s an opportunity for Azusa and Flatorte to have some naked bonding time together. Azusa just takes Flatorte to a private room in the light novel, but what she has to say in both versions remains the same. It’s a genuinely heartwarming thing, but the main thing to take away from it all: Azusa’s family has grown a little bit bigger.
Now Laika and Flatorte have to do something about their rivalry…

Some little things before I end: I still love the soundtrack for this show. It’s absolutely superb, and the instruments chosen for it just complement the atmosphere perfectly.
Staying on the topic of sound design, the voiced sound effects are something that amuse me a lot, too.

Another excellent episode of I’ve Been Killing Slimes for 300 Years and Maxed Out My Level.

I enjoy writing, manga, anime and video games, so naturally here on my blog, you will find anime reviews, Nintendo news and other such things that I deem interesting.
View all posts by Rory →
This entry was posted in Episodic and tagged Azusa, Beelzebub, Episode 7, Episodic, Falfa, Fatla, Flatorte, Halkara, I've Been Killing Slimes for 300 Years and Maxed Out My Level, Laika, Provat Pecora Allières, Rosalie, Shalsha, Spring 2021 Anime, Vania. Bookmark the permalink.

1 Response to I’ve Been Killing Slimes for 300 Years and Maxed Out My Level Episode 7: The Tea Party and Award Ceremony