We get a much anticipated episode of Tropical-Rouge! PreCure this week, as the fourth member of the team finally makes her debut. She was the one I was most anticipating, so let’s see if her debut episode meets my expectations.

In this episode, Manatsu accidentally upsets some delinquents. When Asuka Takizawa steps in to save her, Laura immediately decides on who the next member of PreCure should be.
Asuka’s a bit of a lone wolf, though she ends up helping Manatsu and company find a room for their club and tidy it out.
Asuka even steps up to help them out when they are attacked by the enemy, becoming Cure Flamingo in the process.

Well, I immediately approve of Asuka. She appears to be a lone wolf, but it immediately becomes clear she does care for the people around her, otherwise she would’ve never stepped in when those delinquents threatened Manatsu. She’s also badass, and that’s before transforming. 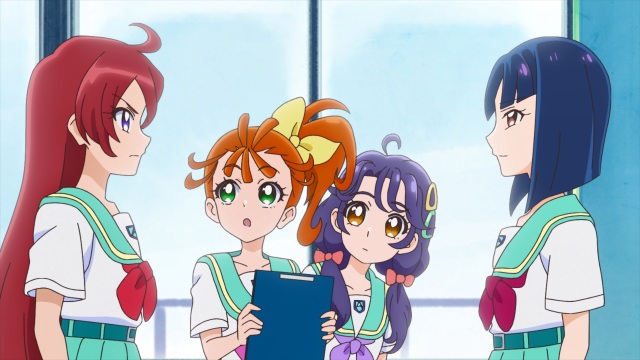 It also seems that Asuka has a rivalry of some sort with the student council president. Maybe there’s some kind of feelings there, and something happened between them that caused Asuka to become a bit of a loner. I’m pretty interested in seeing where that will end up going.

Minori draws up plans for tidying the club room

I would have liked to get Minori’s first impression of Asuka, to get a better idea of how she feels about her. I’m sure she accepts her, but it would’ve been nice to have that little extra. Oh well, I’m sure there’ll be plenty more opportunities for interaction between those two later on.
We do, however, get interactions between Asuka and Laura. I do like how Asuka calls Laura out on her motives; I suspect those two will probably end up clashing at some point. 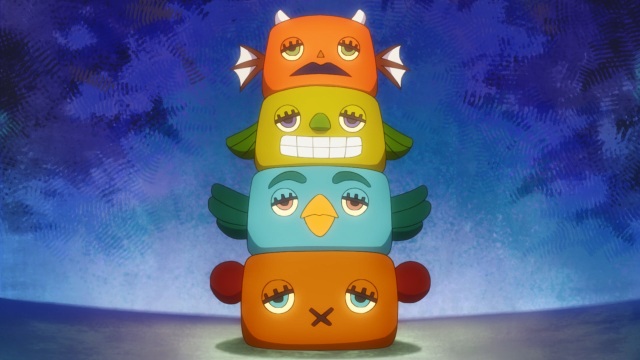 This Yarane-da’s strategy is divide and conquer

Having a Yarane-da that can split into four is a pretty good justification for having the current Cures struggle to overcome their opponent. They end up outnumbered, after all. Of course, Asuka spots the trouble from a distance, and rushes to the scene. Time for our fourth Cure to make her debut!

Asuka looks amazing as Cure Flamingo, too. Her special attack, Pretty Cure Swooping Flamingo Smash, is great as well. There’s actually some great frames in there, if you are able to go through the animation frame by frame.

With that, the entire team is assembled. For now, at least. Asuka is such an amazing addition to the cast. I had high hopes for her, and she blew my expectations away. As things stand right now, she is my favourite Tropical-Rouge! Cure.
All four are fantastic, though.

Next time, Manatsu lovingly bites Asuka. Oh, also something about deciding what their club will actually do, but I know which scene from the preview caught my attention.