I’ve covered both the original light novels and the anime adaptation of Adachi and Shimamura before, and now I shall be sharing my thoughts on the manga adaptation by Moke Yuzuhara. This is actually the second manga adaptation of Adachi and Shimamura. This one is serialised in Monthly Comic Dengeki Daioh. Yen Press have licensed it for the English release.
This first volume contains one through to five, plus a short story written by Hitomi Iruma. 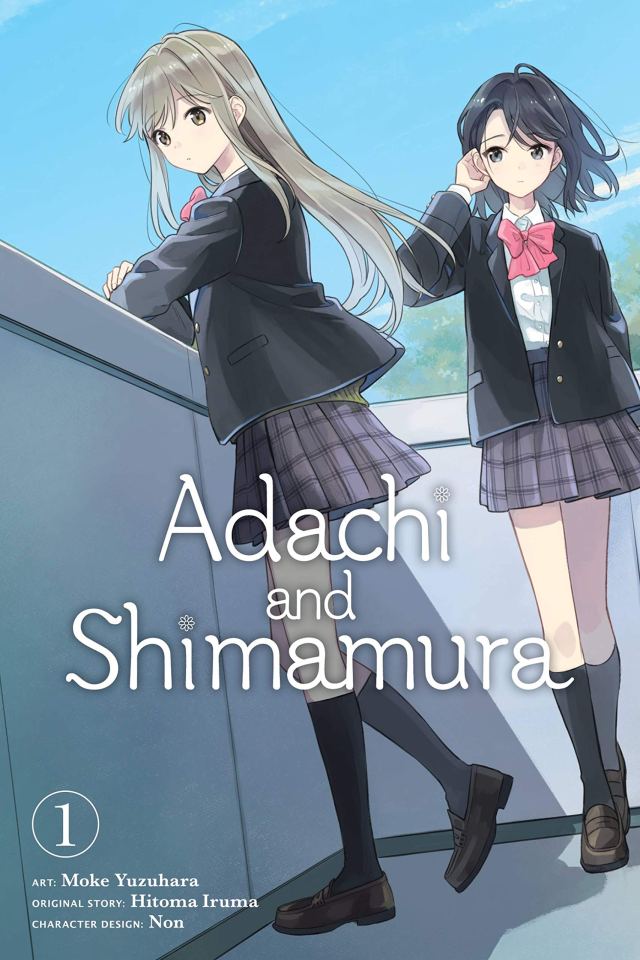 Shimamura’s not really into the social scene at school. So when she cuts class and heads to her usual spot in the gym, the last thing she wants to see is another girl there making herself at home. Somehow, though, the awkward, silent moments they share keep bringing them closer…
But when Adachi starts wanting something more, Shimamura finds the line between friends and girlfriends getting thinner and thinner…

Light novel, anime and now manga. Each one portrays the story of Adachi and Shimamura in its own unique way, whilst maintaining the important plot points. No matter the medium, all do a pretty fantastic job of telling the story.
The manga is not a perfect one-to-one adaptation of the light novel, but it doesn’t need to be. We have Adachi being adorable as always, and Shimamura steadily coming to terms with her friendship with Adachi.
Yashiro is present as well. Interestingly, she reveals her face in her first appearance in the manga. Both light novel and anime save that for later on. There is one thing that disappoints me regarding Yashiro, though. It’s actually quite a silly thing: the “FLAT BUTTE” t-shirt. Yashiro wears that in the light novel during the whole bowling date thing, but apparently all the adaptations just decided to stick with her white dress.

There isn’t all that much for me to say about Adachi and Shimamura that I haven’t said before. The manga does a good job of adapting Hitomi Iruma’s story into comic form. I personally would go for the light novel over the manga, but that’s just my preference. You’re still in for an enjoyable experience no matter which medium you choose to experience Adachi and Shimamura in.

I enjoy writing, manga, anime and video games, so naturally here on my blog, you will find anime reviews, Nintendo news and other such things that I deem interesting.
View all posts by Rory →
This entry was posted in Manga and tagged Adachi and Shimamura, Hitoma Iruma, Manga, Moke Yuzuhara, Non, Volume 1, Yen Press. Bookmark the permalink.