Sorawo, Toriko, Kozakura and Akari decide to go to a Japanese barbecue restaurant in this episode of Otherside Picnic. This one is an anime original, written by Iori Miyazawa. For those who don’t remember, Iori Miyazawa is the author the light novels.

Sorawo sees something odd in her mirror

Another anime original story means I have nothing to compare this episode against, but I can certainly offer my opinions on it.
The plot of this episode sees Sorawo and Toriko going to a barbecue place. Toriko also invites Kozakura and Akari. When Akari goes ahead, she ends up in the in between world once again, so Sorawo and Toriko decide to rescue her. Kozakura unwittingly joins them.

Toriko and Sorawo discover that Akari has got herself lost

Something that comes as a relief to light novel readers like myself happens early on in the episode. Sorawo and Toriko discuss the stranded American soldiers, and their desire to rescue them. That means we’ll be getting that chapter adapted. The chronology of the anime puts it much later than in the light novel, but, hey, at least we’re finally getting around to it. 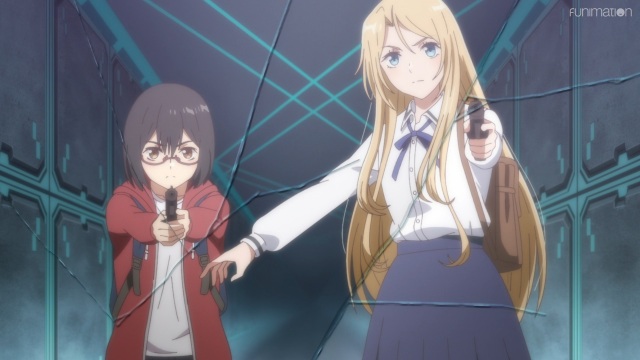 It is not the Otherside that Sorawo, Toriko and Kozakura end up in this time, but the world in between. This is the second time we’ve witnessed it, after the whole ninja cat thing. Has quite an ominous vibe to it, in a different way from the Otherside.
Actually, the scene with the TVs gives it a similar vibe to H.N. Elly’s Labyrinth from Puella Magi Madoka Magica.

Overall a pretty good episode, though that chase scene might just be a little awkward. To be fair, though, I wouldn’t exactly say Otherside Picnic has the best animation of this season. It’s only a small section of the episode, though, and this one puts on a pretty strong showing elsewhere.
I’d even go so far as to say that this episode is even better than a few that have been adapted from the light novels.

I enjoy writing, manga, anime and video games, so naturally here on my blog, you will find anime reviews, Nintendo news and other such things that I deem interesting.
View all posts by Rory →
This entry was posted in Episodic and tagged Episode 10, Episodic, Otherside Picnic, Sorawo Kamikoshi, Toriko Nishina, Winter 2021 Anime. Bookmark the permalink.