A new year, a new season of anime and a new light novel adaptation. This time it is Iori Miyazawa’s Otherside Picnic, about two girls exploring a mysterious parallel world they call the Otherside.
I’ll be comparing the anime to the light novel, as well as chipping in my own personal opinions on the show.
With that, this first episode shows us the first meeting between our two main characters: Sorawo Kamikoshi and Toriko Nishina.

This first episode of Otherside Picnic adapts chapter one – or File 1 – of the light novel, “Kunekune Hunting”. You’ll have noticed already there are some differences in translation; I’ll get to that in a moment.
The plot for this first episode focuses on the first encounter between Sorawo and Toriko, who then decide to team up to hunt a strange being called a Kunekune in order to earn some money. 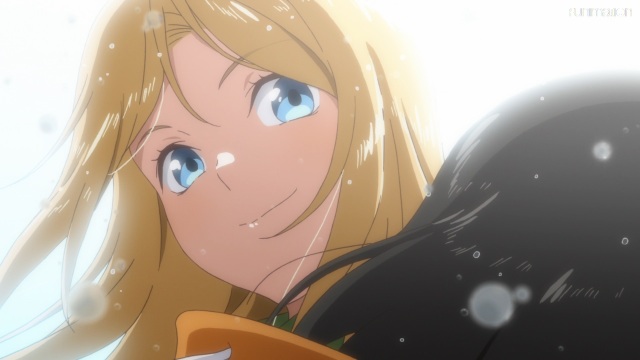 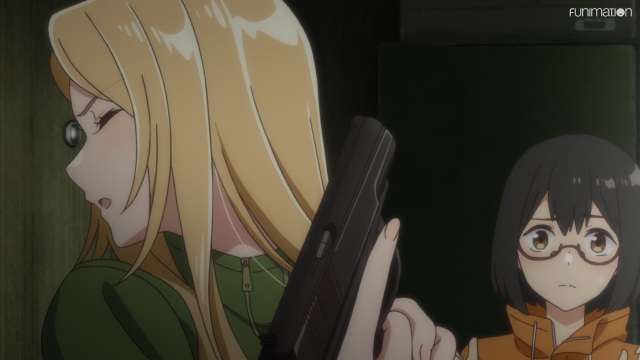 Toriko carries a gun, much to Sorawo’s surprise

This first episode is a decently faithful adaptation of the first chapter. The events it portrays are in line with the light novel, though there are some minor details that are changed. For example, the water that Sorawo is in at the beginning is shallow. Compare that to the light novel, where the water flows into Sorawo’s mouth when she tries to call out upon hearing someone approaching her.

Toriko and Sorawo plot their next trip into the Otherside

Whilst Toriko is able to persuade Sorawo to return to the Otherside once more, the anime doesn’t tell us that Sorawo intends to buy a new mobile phone with the money they’ll earn. That’s plainly in the light novel, though.

Returning to the Otherside is fraught with dangers

Something that I should probably point out is that this anime uses CG occasionally. It’s a little jarring when it switches between the two different styles of animation, but not a deal breaker for me. I’m sure there are those out there who will balk at the use of CG, but that’s their loss.

Sorawo and Toriko’s encounter with the Kunekune is kind of a very important event for their exploration of the Otherside. We get hints of how it affected them, but that will become clearer in the future – or, you know, in the opening credits if you pay attention.

Overall, I am happy with what I saw from this first episode of Otherside Picnic. Based on what I’ve read, and seen, the Otherside feels a lot like Pure Illusion from Flip Flappers. I guess both are parallel worlds that exist beside our own – or something like that.

Solid start for this show, and I know that Sorawo and Toriko have plenty more interesting adventures ahead of them.

I enjoy writing, manga, anime and video games, so naturally here on my blog, you will find anime reviews, Nintendo news and other such things that I deem interesting.
View all posts by Rory →
This entry was posted in Episodic and tagged Episode 1, Episodic, Otherside Picnic, Sorawo Kamikoshi, Toriko Nishina, Winter 2021 Anime. Bookmark the permalink.