Kuma Kuma Kuma Bear is a twelve-episode anime adaptation of the light novel series written by Kumanano and illustrated by 029. The show was directed by Hisashi Ishii and Yuu Nobuta, and written by Takashi Aoshima. The music is by Shigeo Komori and that studio that produced it is EMT Squared.
The show aired during the autumn 2020 season of anime, and is available to watch on Funimation. 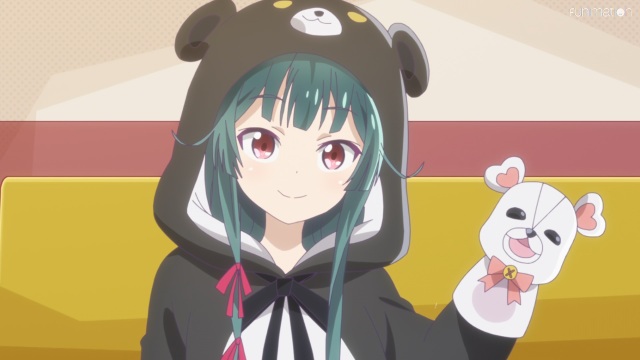 Kuma Kuma Kuma Bear is yet another isekai anime. It tells the story of Yuna, who is transported into what she believes is the world of her favourite video game. However, her level has been set to one, and all she has is a bear suit. Yuna has to adapt to her new world, and meets plenty of interesting people along the way.

Kuma Kuma Kuma Bear is not a perfect 1:1 adaptation of Kumanano’s light novels. It would be more accurate to say that this anime is inspired by the light novels, as the events chronicled in both play out pretty differently. Of course there are some similarities, particularly concerning the characters that Yuna meets.
I’ll be honest here: people who have not read the light novel will probably get more out of this adaptation than those who have. 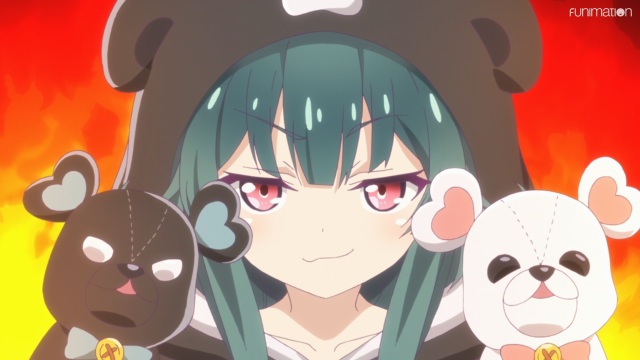 Reading the light novel may give one certain expectations from this anime, and it just doesn’t quite meet them.
Kuma Kuma Kuma Bear‘s first noticeable flaw is its first episode. That episode should have come around the middle of the season, as it is not the most ideal way for Yuna and the new world she’s in to be introduced. It just throws viewers straight in without any setup.
Episode 2 is the show’s actual starting point, and fortunately Kuma Kuma Kuma Bear does have things get back on track from that point onwards. Episode 2 provides a proper introduction to everything.

One of the highlights to come from the show is Yuna’s relationship with Fina. She meets her shortly after arriving in the new world, and the two form a close bond. Their interactions with each other provide plenty of cute moments. Fina’s such a significant presence that episodes without her just don’t quite feel right.
Yuna makes plenty of new acquaintances during the show, but none end up as important to her as Fina.

Kuma Kuma Kuma Bear‘s best parts are arguably its slice of life segments. Yuna does see combat on occasion, but she is the typical overpowered protagonist. Something we’ve seen done with Mile in Didn’t I Say to Make My Abilities Average in the Next Life?!, and something we’ll no doubt see again in future isekai anime.
Without the bear theme, Kuma Kuma Kuma Bear would basically have no identity of its own. It would just be another isekai anime with an overpowered protagonist.
So whilst combat gets very predictable when it happens, the slice of life segments offer more in the way of variety. Watching Yuna acquire eggs, cook food or just be with Fina tends to be far more entertaining than watching Yuna slay her dozenth monster.
So the fights are meh, but we do get some pretty enjoyable reactions from the people hearing about Yuna’s exploits.

Kuma Kuma Kuma Bear had the potential to be amazing, but it just missed the mark. That is my take as a light novel reader; there was so much that could’ve been in the show but just wasn’t.
I know I keep picking out flaws, but that’s simply because I wanted Kuma Kuma Kuma Bear to be better than it was. The light novels are a joy to read, but the anime adaptation just didn’t quite capture that for me.
Knowing the source material might come as a bit of a curse in this case, as I feel like I would have enjoyed the show more not knowing what I was missing out on.

Score: 7/10
Decently enjoyable, but doesn’t quite capture the magic of the light novels. For those who haven’t read the light novels (also manga, I suppose), you could probably add a point – Yuna and Fina do pair up very well together.
Perhaps the second season can be more on point.

I enjoy writing, manga, anime and video games, so naturally here on my blog, you will find anime reviews, Nintendo news and other such things that I deem interesting.
View all posts by Rory →
This entry was posted in Rory's Reviews and tagged Autumn 2020 Anime, Kuma Kuma Kuma Bear, Rory's Reviews. Bookmark the permalink.