Adachi and Shimamura Episode 2: Fishing for the Future

Shimamura makes quite an eccentric acquaintance in the second episode of Adachi and Shimamura, and then we get Adachi’s perspective on her relationship with Shimamura.

Adachi and Yashiro partaking in a spot of fishing

In this episode of Adachi and Shimamura, we are officially introduced to the little astronaut Yashiro Chikama. After that series of events, things shift to Adachi’s perspective, and she’s had quite the interesting dream.

This episode adapts two chapters of the light novel: chapters two and three, titled “Fishing for the Future” and “Adachi, Questioning” respectively. “Fishing for the Future” is where Yashiro Chikama is officially introduced, and the little astronaut actually proves to be quite entertaining. I guess it also helps that Shimamura actually plays off the little astronaut very well.

Anyone who makes a “handholding is lewd” joke is boring

It isn’t only Shimamura who meets Yashiro in this episode, the astronaut puts in another appearance during what can only be described as a date between Adachi and Shimamura. It is through Yashiro’s appearance that we start to get a pretty good idea of how Adachi feels about other people cutting into the time she spends with Shimamura.

We get a bit more insight into Adachi’s thoughts and feelings through this episode, especially once we get to the adaptation of chapter three of the light novel, “Adachi, Questioning”.

Some might be wondering what Adachi is questioning, and the answer would be her dream. I have to say Adachi’s performance in this episode is amazing, as she tries to come to terms with what it is she actually feels for Shimamura.

The adaptation of the light novel has been pretty faithful so far, though probably not entirely 1:1. However, there is one thing that I picked up on, and that is when Shimamura’s family happen to visit the place where Adachi works. In the light novel, Shimamura goes there with both her parents and younger sister. Shimamura’s dad is nowhere to be seen in the anime, for some reason. It doesn’t really make any difference in the grand scheme of things, but I’ll figure I’ll point it out. 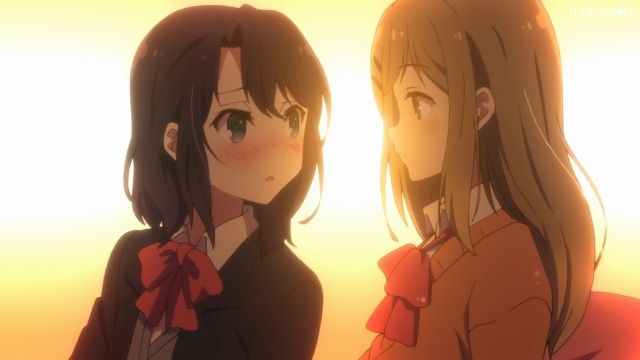 Adachi is so adorable in this episode. She has so many great moments, though I have to say her flailing when she is sat in between Shimamura’s legs is a personal highlight. She still needs to work some things out, but it is certainly a delight watching her realise that her feelings for Shimamura may run quite strong.

Another excellent episode of Adachi and Shimamura. I have absolutely no complaints about what we got here. It was a delight to watch, and easily puts it in the running as one of my favourites of this season.

I enjoy writing, manga, anime and video games, so naturally here on my blog, you will find anime reviews, Nintendo news and other such things that I deem interesting.
View all posts by Rory →
This entry was posted in Episodic and tagged Adachi, Adachi and Shimamura, Autumn 2020 Anime, Episode 2, Episodic, Shimamura, Yashiro Chikama. Bookmark the permalink.

1 Response to Adachi and Shimamura Episode 2: Fishing for the Future