Failed Princesses is a yuri manga written and illustrated by Ajiichi, licensed for an English release by Seven Seas Entertainment. It focuses on popular girl Nanaki Fujishiro and plain girl Kanade Kurokawa, and the relationship that develops between them.
This first volume contains chapters one through six. 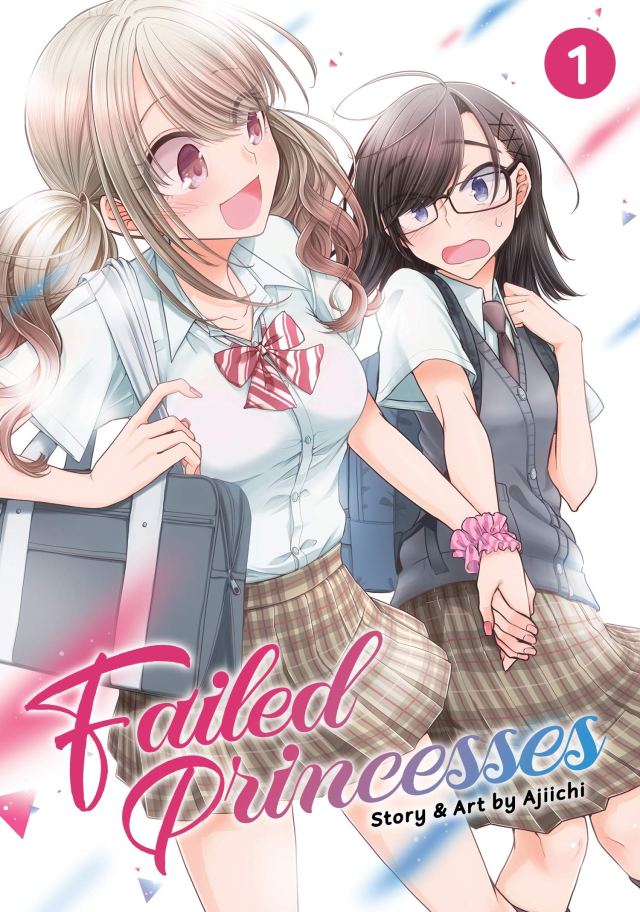 Opposites Attract!
Fujishiro Nanaki is super cute, super popular, and super annoyed with anyone as plain as her classmate Kurokawa Kanade. When Nanaki finds out her boyfriend’s cheating on her, however, her life makes a complete 180 – as does her relationship with Kanade.

Being the first volume, we start with introductions to our two main characters. First is Nanaki Fujishiro, who doesn’t exactly make a positive first impression. That’s not due to her dating a guy, or anything like that, though: it is her initial attitude towards Kanade that is the problem.
Fortunately, Nanaki gets better pretty quickly, though she does need to experience some heartbreak first. Turns out said heartbreak might actually just be a blessing in disguise.

On the flip side, we have Kanade Kurokawa. It is easy to empathise with her, though I could see some people not really getting on with her being so passive. Again, though, that is something that slowly begins to change, especially after she and Nanaki actually start talking to each other as equals.
Even from the first volume alone, it seems pretty clear that Nanaki and Kanade are really good for each other.

Whilst Nanaki’s initial introduction left me with a sour taste in my mouth, she definitely turned it around as the story progressed. Becoming friendlier with Kanade was the start of it, but what really convinced me was when Nanaki stood up to her friends when they started badmouthing Kanade.
It extends beyond that moment, as well: Nanaki sticks to her guns about the whole matter.

Whilst I do like how things progress for Nanaki and Kanade in this first volume, I can’t help but feel that Nanaki might see Kanade as something of a project – a plain girl that she reckons she can make cuter. Nanaki’s ultimate goal does seem to be to see Kanade’s smile, though, so that does allay that fear a little. Maybe Nanaki will realise that she wants something more than just a smile in the future.

Nanaki and Kanade’s respective groups of friends seem to be kind of shallow (admittedly, Nanaki is the same way at first), which does not do any favours for the supporting cast. Fortunately, not every member of the supporting cast is that way: Nanaki’s brother Tatsumi is a decent person. With Kanade being the first friend Nanaki takes to his salon, I wonder if he realises that there might be something going on there.

This is only the first volume of Failed Princesses, so there are plenty of possibilities about the path the story will take from here. Whatever the case may be, this first volume certainly pulled me in, and I look forward to seeing what developments await Nanaki and Kanade in the future.

I enjoy writing, manga, anime and video games, so naturally here on my blog, you will find anime reviews, Nintendo news and other such things that I deem interesting.
View all posts by Rory →
This entry was posted in Manga and tagged Ajiichi, Failed Princesses, Manga, Seven Seas Entertainment, Volume 1. Bookmark the permalink.