Healin’ Good ♡ PreCure Episode 20: Through Time, Two Winds as One

A new ally appeared before PreCure in the previous episode, and this is the one where we get to learn a little more about her.

Ms. Fairy – well, that’s what Nodoka and the others call her for most of this episode at least

In this episode, “Ms. Fairy” decides that she needs to take Latte back to the Healing Garden to protect her. After all, her sole duty is to ensure the wellbeing of Latte. Ms. Fairy doesn’t give much regard to what Latte actually wants, though…
A Mega Byo-gen attack gives her the chance to find out what it is she should actually be doing, though. 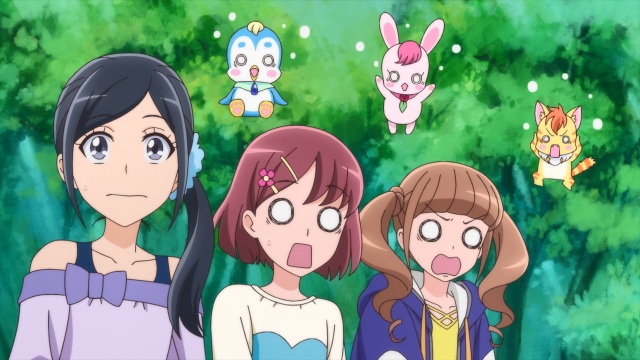 Well, it seems right away that Ms. Fairy isn’t exactly the sharpest tool in the shed. Her single-minded determination to protect Latte probably doesn’t help matters, either. Her behaviour does make her kind of endearing, though. I think its probably safe to say that I am warming to her, especially with this episode.

Nodoka is just about to get Ms. Fairy to listen to what Latte actually wants when a Mega Byo-gen shows up. Naturally. To be fair, Grace, Fontaine and Sparkle use some pretty spectacular teamwork to gain the upper hand in battle.
Throughout all the seasons of PreCure, there tends to be a point where the monsters of the week are powered up – and that is exactly what happens in this episode. Suddenly, Grace, Fontaine and Sparkle find themselves at a disadvantage. 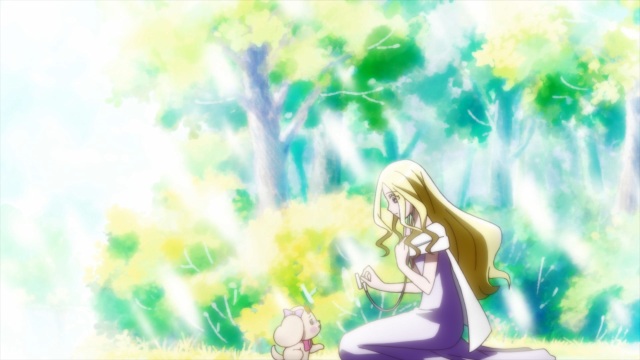 All that leads up to Ms. Fairy finally listening to what it is that Latte wants, and her inevitable transformation sequence.

Through time, two winds as one! Cure Earth!

Cure Earth’s transformation sequence is actually pretty good. I like it a lot. Cure Earth seems to be a kind of amalgamation of Cures from previous seasons. The use of earth and wind brings to mind both Splash Star Cures, her design has a bit of Cure Moonlight about it and the whole fairy thing was done before by Cure Felice. By the end of Healin’ Good, I’m sure Cure Earth will stand on her own merits, though.

As Cure Earth fights, some interesting information comes to light. She is not Grace, Fontaine and Sparkle’s actual predecessor; she just shares her appearance. Instead, the Earth created her in response to Teatine’s wish to protect Latte, using the power of the actual predecessor.

So whilst Cure Earth may be a relatively new existence in the world, she certainly knows her way around a fight. She has absolutely not trouble at all fighting Batetemoda, and that was a lot of fun to watch. Her special attack looks good, too.
She defeats both the Mega Byo-gen and Batetemoda, though whether Batetemoda is actually gone for good remains to be seen.

Nodoka comes up with a proper name for Ms. Fairy

This episode wraps up with Nodoka giving Ms. Fairy the name of Asumi – though the different ways in which Nodoka, Chiyu and Hinata address her does cause a little confusion.

Cure Earth/Asumi’s introduction into Healin’ Good ♡ PreCure continues to be pretty strong. I may have had reservations about her previously, but I’m willing to let go of those after this episode. Plus, next episode looks like it will be a lot of fun as Asumi acclimates to her new life.