As things stand, there are now over 800 episodes of Pretty Cure across all of its seasons. Toei has been doing its magical girl thing for a little while now, and the nineteenth episode of Healin’ Good ♡ PreCure gives us something that has become a tradition for the franchise. Time for a new ally to take the stage.

Picking up from the previous episode, this one begins with Nodoka and the others caring for Latte, who has fallen ill. The appearance of a Mega Byo-gen only complicates the situation. When a desperate situation arises, a new ally suddenly appears to lend her aid.

This episode had to come sooner or later, and sure enough here it is. I’ll admit that I wans’t really feeling all that much hype for it, but I’ll get into that when I come to the main point of this episode.

Everyone cares for Latte

Much of the first half of the episode is Nodoka, Chiyu and Hinata, as well as the Healing Animals, caring for Latte. It is only natural; they want her to recover as soon as possible, after all. That does result in Latte believing that she is weak, but of course nobody else thinks that.

So apparently when Latte is sick, she isn’t affected by the appearance of a Mega Byo-gen. That means Nodoka and the other aren’t alerted to its presence right away, but Chiyu overhearing a conversation clues PreCure into where they need to be. Latte insists on joining them, as well.

The battle does not go in PreCure’s favour, at all

Now here’s the thing with this type of episode: the main characters have to kind of suck. I guess you could say that the delay in getting to the Mega Byo-gen resulted in it growing just a little too strong for our heroines to handle. If nothing else, though, it does give Latte a moment to shine before the main event.

I suppose there may have been some viewers out there who were expecting Latte to end up becoming the next Cure, but that is not the case at all. Then again, I suspect anyone who keeps up with PreCure news already knew that. Whatever the case, the main event arrives.

So Cure Earth doesn’t actually properly introduce herself in this episode, so I’ll guess I’ll do that on her behalf – and to make discussing her somewhat easier.
Anyways, going back to what I mentioned earlier: I wasn’t feeling a lot of hype for her introduction. Unlike Hugtto‘s Cure Amour and Cure Ma Cherie, or Star☆Twinkle‘s Cure Cosmo, I don’t feel that we got all that much build up to her debut.
I imagine the hiatus didn’t help with that, but all we’ve really had in the show was one Element mentioning the current PreCure’s predecessor.
My personal bias about Nodoka, Chiyu and Hinata being a fantastic trio also plays into that; I wasn’t entirely sure how a new character could fit into their dynamic. 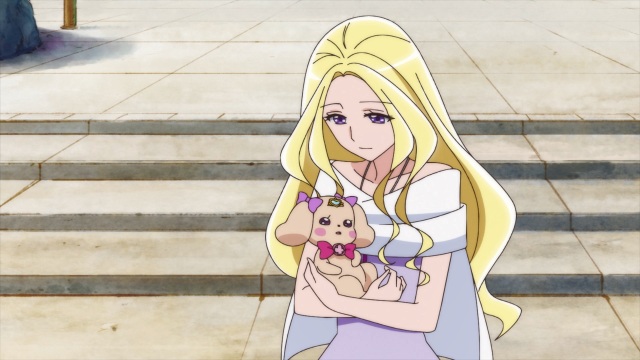 I may have had reservations about Cure Earth’s introduction, but this episode does have me ready to put my doubts aside. I won’t let go of them just yet; after all, we haven’t really seen Cure Earth properly interact with Nodoka, Chiyu and Hinata just yet.
Pretty solid showing from Cure Earth in this episode, though, I’ll admit. Shame Grace, Sparkle and Fontaine had to be less competent than usual.
Cure Earth does have more experience at the whole Pretty Cure thing, though, so it does make sense she’d have an easier time handling the monster of the week. I did enjoy her knocking the Mega Byo-gen around with very little effort.

A good episode, though perhaps not quite at the same level as similar episodes from previous seasons. Still, I am willing to give Cure Earth a chance to prove herself, and this was a good start.
I do like the idea of a more experienced Cure joining the team. Ideally, that will lead to her being something of a mentor for Nodoka, Chiyu and Hinata, since that probably won’t upset the dynamic established between them all that much.

Next time, a proper introduction for Cure Earth, I suspect.