Nyatoran is the focus of episode eighteen of Healin’ Good ♡ PreCure. A chance encounter results in his partnership with Hinata being put in jeopardy, or that’s what Rabirin and Pegitan seem to believe, at least.

In this episode, Nyatoran catches a whiff of an aromatherapy shop, where he sees Orie Kusaka. Nyatoran falls for her, leading the other Healing Animals to worry that Nyatoran might end up switching partners. Hinata, on the other hand, supports Nyatoran with everything she has. 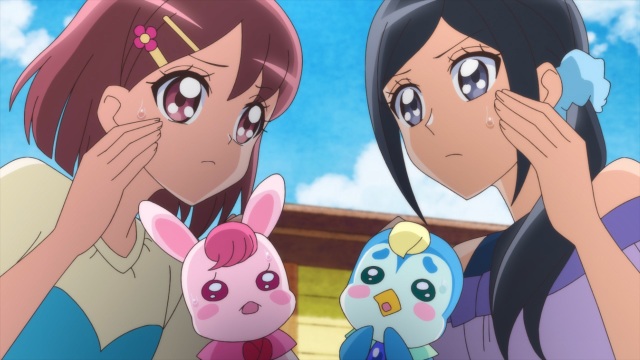 Nodoka, Chiyu, Rabirin and Pegitan wonder what Nyatoran means when he says his heart fluttered when he saw Orie

I say that Nyatoran is the focus of this episode, but Hinata is just as important to the plot of this one, too. Even if the prospect of her being replaced by Orie does come up…

Rabirin and Pegitan imagine Orie as Cure Sparkle, keeping some aspects the same as her civilian form so we can tell the obvious differences. What this suggests is that the identity of Cure Sparkle is tied to Nyatoran, so even if he did swap partners, someone would still take up the mantle of Sparkle.

Hinata supports Nyatoran with everything she’s got

I love all three main cast members in this show, but I have to say that Hinata is particularly excellent in this episode. She doesn’t get depressed about Nyatoran falling for Orie, and instead happily supports him. She’s such a pure soul, and Nodoka and Chiyu should keep her close at all times.

Hinata and the others supporting Orie eventually leads to our monster of the week encounter, because someone has to interrupt them just before Nyatoran is able to confess. I have no idea how the logistics of that one would work, since the Healing Animals are supposed to keep on the down low. 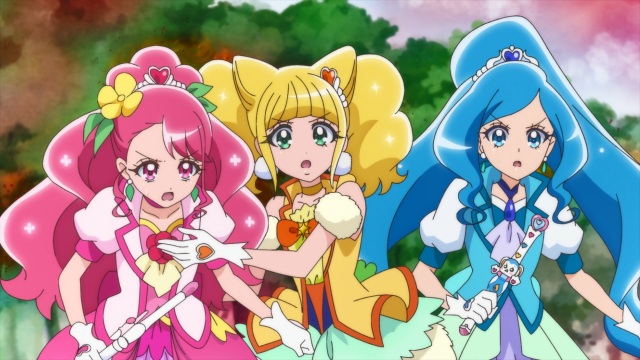 That’s certainly somewhere that Sparkle is placing her hand

Anyways, the battle unfolds as usual. Batetemoda gets directly involved, too, which I do appreciate. Much better than the others who are usually just happy to stand back and watch. The most notable thing about this battle, though, is not the actual combat. 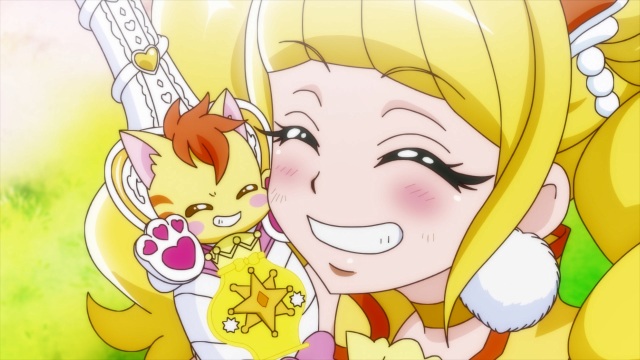 Cure Sparkle and Nyatoran have a heart to heart, whilst the others are busy dealing with Batetemoda and the Mega Byo-gen off screen. Sparkle goes into why she is supporting Nyatoran, and it is made pretty clear that their partnership is not changing any time soon.
After that, Cure Fontaine casually manipulates the weather and the fight against the Mega Byo-gen reaches its conclusion. 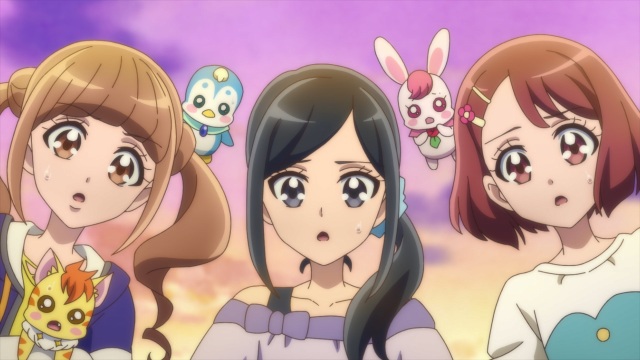 This episode ends in a way that is pretty typical when you get one that focuses on a character falling for another. Then Latte falls ill, but that’s for the next episode.

This was a decent episode. I’ve already mentioned how great Hinata was in it; I suspect that is the largest contribution to my enjoyment of it. Healin’ Good ♡ PreCure‘s incredibly strong main cast continues to be excellent, whether it is just one or all three of them in the spotlight.

Next time, something exciting happens.