The ecchi magical girl action continues in the second volume of Kenji Saito and Shouji Sato’s Divine Raiment Magical Girl Howling Moon, which sees bearers of the Divine Raiments clash against each other.
This second volume contains chapters five through to eight. 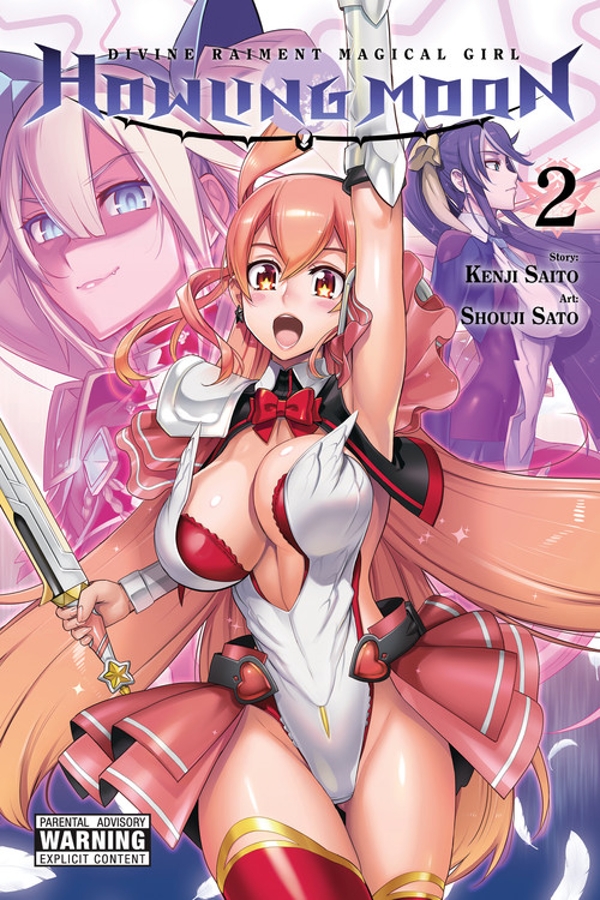 Middle schooler Kaguya Terui has gained the power to morph into a magical girl, and so has her best friend, Himawari! To save Himawari from becoming an unwitting pawn of evil, Kaguya throws herself into the Elder Wars – and directly into battles against other girls like herself. As new rivals make their presences known, will this clash of magical girls only grow fiercer?!

Since this is only the second volume of Divine Raiment Magical Girl Howling Moon, Kaguya is still getting used to her powers as Shining God Moonlight Howling Moon. The appearance of God Soaring Angel Windy Walker offers her a chance to learn more about her own abilities.
It is quite a clash that Howling Moon has with Windy Walker, though that gets put aside with the arrival of Flaming Star. The action continues, but with Flaming Star as the enemy, leaving the other two to form an impromptu team.
Howling Moon realises that fighting probably won’t achieve her goal, so she takes a different approach. It is an amusing one, and actually works quite well.

After the dust settles on all that, Kaguya makes a new friend. A girl named Kuon Mishimiya, who lives with an abusive uncle. Naturally, due to the type of story this is, it isn’t long before Kuon gains power of her own. It is unclear if she will be antagonistic towards Howling Moon when they inevitably meet.

On the subject of Howling Moon, she gets quite a spectacular moment during the story. Seems that her power should not be underestimated.

As I’ve already mentioned, this is an ecchi magical girl manga, which of course means a  lot of fanservice. This was a precedent set in the first volume, so I’ll just assume anyone who reads the second knows exactly what they have signed up for. Is the fanservice a vital part of the plot? Not really. If nothing else, it is titillating.

Regardless, there is a lot of action in this second volume of Divine Raiment Magical Girl Howling Moon, and the plot is moving along with the introduction of a few more Divine Raiment bearers. It seems things are being set up for them to fight, but perhaps the truce between Howling Moon and Windy Walker offers a glimpse of what we could expect in the future.
Until then, though, there is the small matter of the Elder Wars.

Some proper thrilling stuff to be found in this volume of Divine Raiment Magical Girl Howling Moon.

I enjoy writing, manga, anime and video games, so naturally here on my blog, you will find anime reviews, Nintendo news and other such things that I deem interesting.
View all posts by Rory →
This entry was posted in Manga and tagged Divine Raiment Magical Girl Howling Moon, Kenji Saito, Manga, Shouji Sato, Volume 2, Yen Press. Bookmark the permalink.