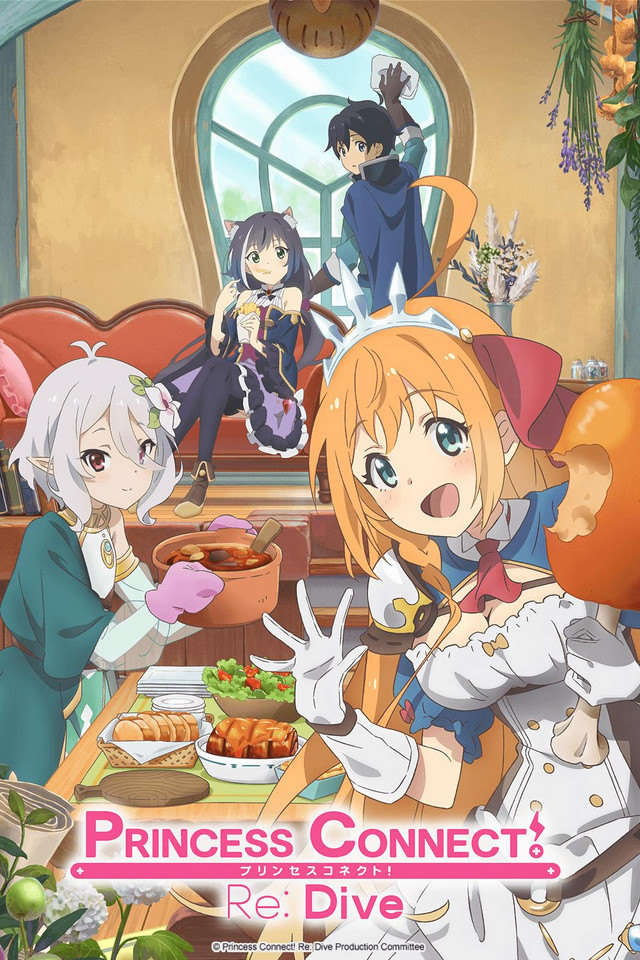 Princess Connect! Re: Dive is a thirteen episode anime adaptation of the JRPG of the same name developed by Cygames. The director and writer for the anime is Takaomi Kanasaki, and the studio that produced it is CygamesPictures.
The show aired during the spring 2020 season of anime, and is available to watch on Crunchyroll.

Princess Connect! Re: Dive focuses on a young man named Yuuki, who wakes up in the land of Astraea with a case of amnesia. Encounters with Kokkoro, Pecorine and Karyl see the four form the “Gourmet Guild” together, resulting in all kinds of adventures. 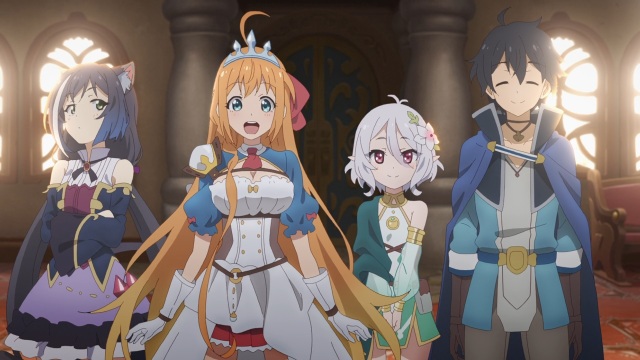 A pretty typical set up for a gacha game adaptation. These types of show tend to have a heroic main character who tends to be bland next to all the other characters. The male main character, Yuuki, is a blank slate, but Princess Connect! Re: Dive actually manages to have fun with that. Yuuki can be an entertaining character, and that stems from him not saying much. Also he tends to be quite unfortunate, though that misfortune is played for laughs.
As for the female members of the cast, Kokkoro is probably the least interesting of the three. She is devoted to serving Yuuki, and makes a funny face when she is surprised. That sums up her entire character.

Fortunately, Pecorine and Karyl make for much more interesting additions to the cast. Pecorine is the energetic member of the Gourmet Guild, who also happens to be a walking black hole. Nobody can put away more food than she can.
Then we have Karyl, who is a tsundere. On top of that, she also has her own inner conflict going on as she has an ulterior motive for joining said guild.

Pecorine is very fond of Karyl

Pecorine and Karyl steal the show; at times it feels like this is Pecorine’s story more than anyone else’s. Pecorine is open when it comes to her affections, whereas Karyl is far more guarded.
Pecorine and Karyl do provide a source of yuri, though it appears to be one-sided. Patience might just pay off though.
Besides Pecorine and Karyl, there are also a few cases where some female side characters can be interpreted as having romantic feelings for each other. Said characters only tend to be around for a couple of episodes at best, but it is something.

At the end of the day, though, Princess Connect! Re: Dive is not a yuri anime. Sure, there are some yuri relationships present, but what you get here is a fantasy romp. The adventures the Gourmet Guild embark upon all tend to be on the fun side, though there is a hint of darkness running through the story that becomes more prevalent towards the end.

The humour in this show is a lot of fun for the most part. Sometimes it doesn’t always land – I’m not keen on the yandere stuff from an earlier episode – but that will vary from person to person. Still, a decent laugh to be found here if the humour is your type of thing.

Princess Connect! Re: Dive looks really good, too. It sets the precedent very early on with a Pecorine fight scene, and manages to keep things looking great throughout.

Score: 8/10
An enjoyable series of adventures in a fantasy setting, with some decent humour and memorable characters.

I enjoy writing, manga, anime and video games, so naturally here on my blog, you will find anime reviews, Nintendo news and other such things that I deem interesting.
View all posts by Rory →
This entry was posted in Rory's Reviews. Bookmark the permalink.