The third season of BanG Dream! makes a very welcome return, and it seems we are going back to getting weekly double bills up until the end of the season.
Before I get to that, though, I feel this is a pretty appropriate place to mention a couple of things coming up in the world of BanG Dream!. First, RAISE A SUILEN will finally be added to the mobile game later this year – about time, I say.
The other thing is the introduction of a new band called Morfonica. Their song “Daylight” is ace, and I look forward to hearing more from them. One thing that sets Morfonica apart from the other bands is a violin.
But back to the third season. Just a quick recap: CHU2 challenged Roselia to a battle of the bands, and Yukina accepted. Episodes six and seven focus on the Roselia vs. RAISE A SUILEN battle, and what follows afterwards. 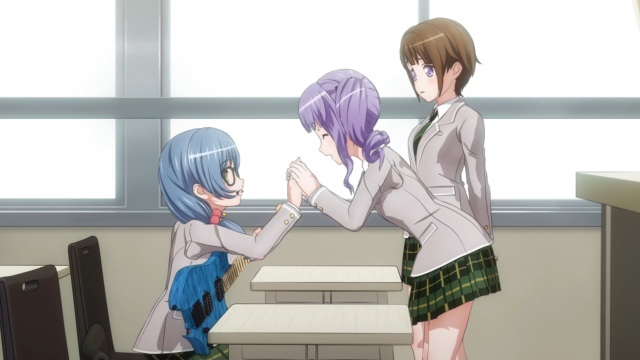 To kick things off, episode 6 presents us with both Roselia and RAISE A SUILEN preparing for their upcoming battle of the bands. Both sides are putting plenty of practice in, though it seems that Sayo feels that Yukina has derailed their plans for Over the Future. 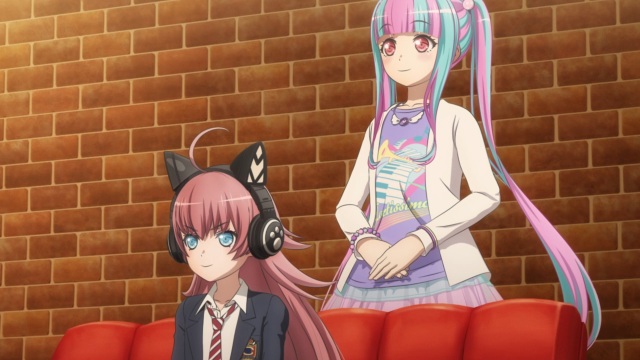 I was half-expecting Poppin’ Party to make a last minute entry when CHU2 was discussing the terms of the battle of the bands, but alas that wasn’t the case. These two episodes are very much focused on Roselia and RAISE A SUILEN, but a couple of the other bands do have relative moments later on.

PAREO is a Pastel * Palettes fangirl, so she can’t contain her excitement when Hina Hikawa comes knocking

One thing that I’m pretty happy about is that the second and third seasons of BanG Dream! take place after Sayo’s character development, which means she gets along with her sister much better. There would have been a time that Sayo would have never accompanied Hina to visit CHU2, but we have long gone past that now thankfully. 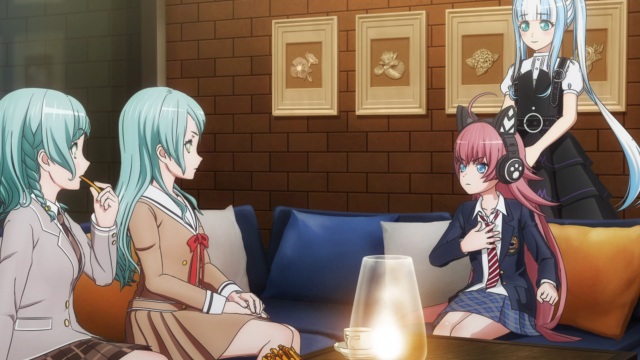 Sayo talks to CHU2, after getting some encouragement from Hina

Sayo has some pretty choice words to say about the battle of the bands. Definitely something worth keeping in mind, as this will come back in the next episode. 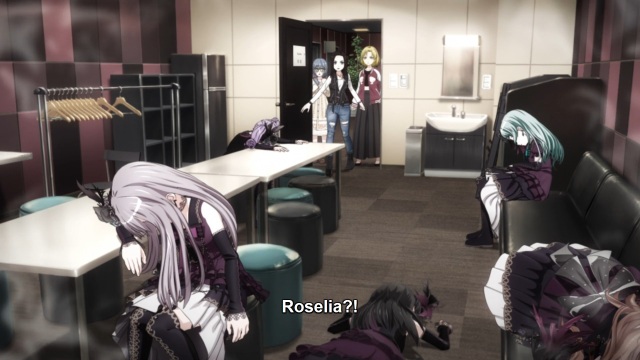 Getting a sense of déjà vu here…

Seems like old habits die hard for Roselia, who are pretty keen to make sure regardless of whether they perform first or second. It does lead to some nice interactions between Roselia and most of RAS, though. 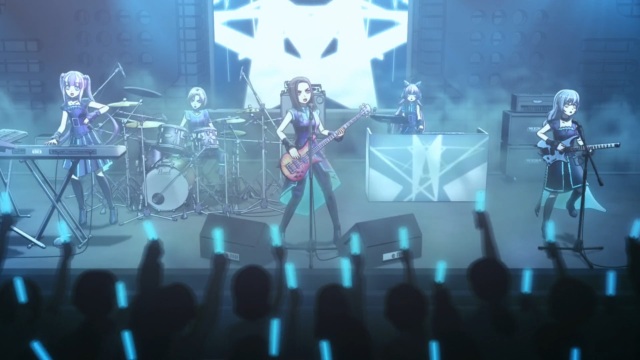 It is kind of a shame that this episode cuts away from Roselia’s performance, whilst giving RAISE A SUILEN the spotlight for their song “EXPOSE ‘Burn Out!!!'”. Kind of kills the tension of the battle of the bands if you ask me. Oh well, it is easy enough to track down Roselia’s song “LOUDER” and listen to it elsewhere (plenty of BanG Dream! songs are available on Spotify, for example.)

Seems LOCK’s first live performance with RAS is a little too much for her, so she rests whilst the results are announced. That is about where this episode ends.

Moving on to episode 7, which takes place after the battle of the bands. Roselia are keen to push themselves even further; Sayo in particular. Unfortunately, Sayo pushes herself just a little too far. 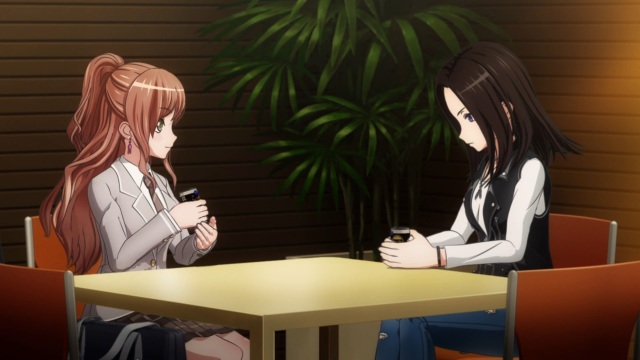 This episode shows that some of the members of both Roselia and RAS actually get along pretty well. We get MASKING interacting with Ako, as well as Lisa and LAYER chatting. Lisa and LAYER actually have quite a bit in common with how they got into music. LAYER also explains how she ended up in RAISE A SUILEN.

I mentioned earlier how a couple of the other bands get their moments in this episode. First is Afterglow, who reveal that they supported Roselia during the battle of the bands. Moca delights in embarrassing Ran when she tells Roselia that, which is exactly what I’d expect.
Also, having Tsugumi ask about the Sayo was a nice touch, too. Afterglow’s conversation with Roselia here is actually quite important. 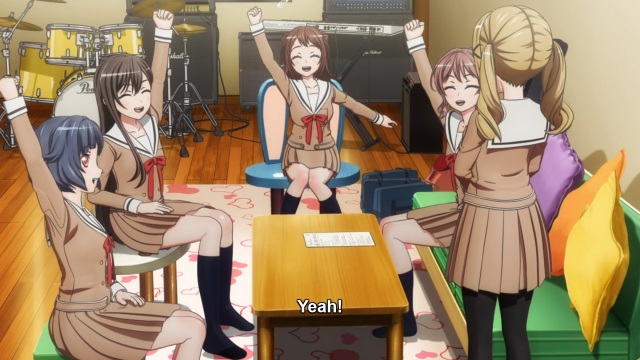 Poppin’ Party are going to get even more serious

Moving away from this episode’s main plot with Roselia for a moment, it seems like PoPiPa are gearing up for moving up the rankings. Arisa seems pretty keen to achieve her dream of performing at the Budokan, so she takes the lead on that. Whether Poppin’ Party can reach the heady heights of Roselia and RAISE A SUILEN remains to be seen, though.

Sayo pushed herself too hard

Despite Sayo saying those things to CHU2 in the previous episode, it appears she was the most affected by what happened in the battle of the bands – so much so that she pushes herself too hard and collapses with a fever. Right before Over the Future, too…

Whilst the others prepare some food, Yukina and Sayo have a heart-to-heart

Things may not have gone Roselia’s way, but Yukina understands that they have had a very valuable experience – and thanks to the likes of both Afterglow and RAISE A SUILEN, Roselia can continue to strive for even greater heights. That is effectively what she has to say to Sayo.

Roselia return to the stage

This episode ends with a triumphant return to the stage for Roselia (including the now recovered Sayo).

It is such a delight to have the BanG Dream! girls back once again. The Roselia vs. RAISE A SUILEN drama has resulted in both bands growing, and I certainly enjoyed seeing how that rivalry unfolded. Things may not have gone Roselia’s way, but they have gained valuable experience and will only come back stronger.

Two excellent episodes. Next time seems like we’re going to get some stuff from the other bands, which is certainly worth looking forward to.