Thoughts on Didn’t I Say to Make My Abilities Average in the Next Life?! The Manga Volume 3

The third volume of Nekomint’s manga adaptation of Abilities Average focuses on the Crimson Vow making their debut as C-rank hunters. Such an occasion calls for the party to tackle greater challenges.
This volume contains chapters twelve through to sixteen. 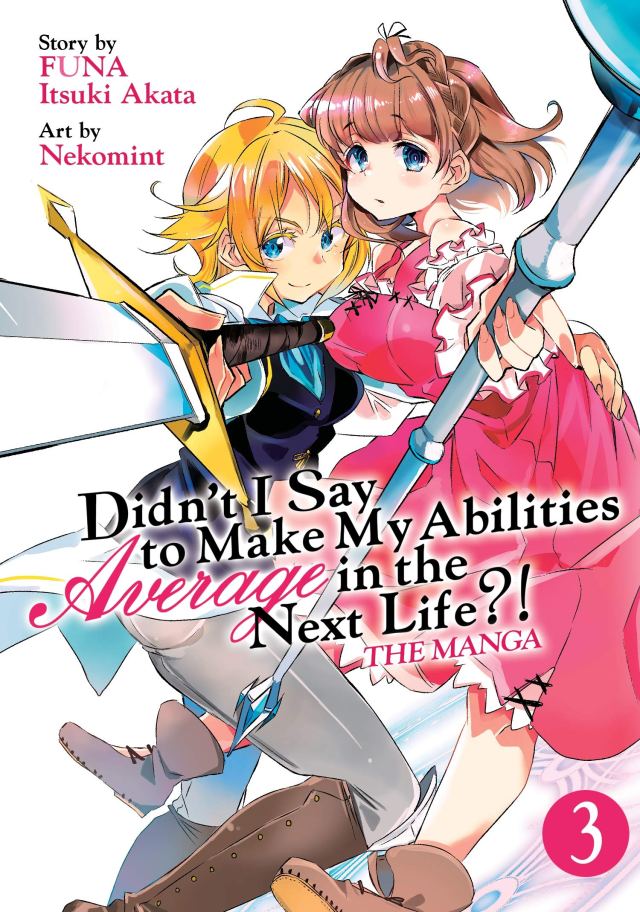 Front cover of the third volume of Didn’t I Say to Make My Abilities Average in the Next Life?! The Manga, featuring Mavis and Pauline

The Big Debut!
It’s time for the Crimson Vow’s first job as C-rank hunters! They head out to nab some orcs, but things don’t exactly go according to plan. What will Mavis do when her sword breaks right in two?

This particular volume of the Abilities Average manga goes quite heavy on the action scenes, with Crimson Vow embarking on some quests to face monsters that are a little tougher than what they have encountered before.
It also includes some details from the light novels that the anime somewhat glossed over, such as Mile’s slingshot – though it does only get a brief mention, but it is there.

Reina may not grace the front cover of the this volume, but she is certainly a key player in the events that unfold in this volume. It is her desire for the Crimson Vow to face greater challenges that leads them into troublesome situations.
This volume also hints towards Reina’s past (light novel readers and anime watchers will know exactly what they entails, but the manga hasn’t got to that point just yet).

Pauline is no slouch in this volume, either, and we get to see her at what might just be her best after the Crimson Vow return from hunting rock lizards. Her merchant’s blood boils, and it is just a treat to behold when that happens. There’s more to Pauline than big breasts, and that very much comes through in this volume.
She still ends up in a fanservice role regardless, but at least she is able to put multiple skills to use.

There’s also the whole situation with Mavis’ sword; again, something that was more or less glossed over in the anime adaptation. Mile solves that particular problem, and that is probably the only major thing she does in this volume that doesn’t involve combat.

Still, Nekomint has done a pretty decent job of adapting FUNA’s light novels so far. Light novel, anime and manga; all three are pretty decent ways to experience the Abilities Average story. It is worth noting that the manga is a more faithful adaptation than the anime.
However, the anime does cut out quite a bit of content that I personally didn’t particularly enjoy from the light novels. But the focus here is the manga, and it is a pretty easy recommendation for me if you want a swords and sorcery adventure focusing on cute girls.

I enjoy writing, manga, anime and video games, so naturally here on my blog, you will find anime reviews, Nintendo news and other such things that I deem interesting.
View all posts by Rory →
This entry was posted in Manga and tagged Didn't I Say to Make My Abilities Average in the Next Life?!, FUNA, Itsuki Akata, Manga, Nekomint, Volume 3. Bookmark the permalink.