With the fourth episode of Healin’ Good ♡ PreCure, the main team of three Cures finally comes together. Well, at least until they probably introduce one more, but that is something to worry about at a later date.
For now, it is Cure Sparkle’s turn to make her debut.

Hinata seems to be pretty fond of Nyatoran

Chiyu tries to keep Hinata from blabbing about the talking cat

Both Nodoka and Chiyu got strong introductory episodes in this season, and I’m happy to say that Hinata does as well. She had brief appearances in previous episodes, but now seeing one that focuses on her has no doubt that she is a wonderful part of the main cast.

This may be Hinata’s episode, but Nodoka certainly gets some great moments where she shines, too. Healin’ Good ♡ PreCure is proving pretty early on that is has an excellent cast of characters, and that can only be a good thing.

The Megabyogen this week is created from a mirror

The enemy general that appears this week is Guaiwaru, and he reveals that it is not just nature can be infected. Of course, the Megabyogen we get has to be a little too much for Cure Grace and Cure Fontaine to handle on their own, because this is Hinata’s episode.

If there’s one thing that this episode makes abundantly clear about Hinata, it is that she absolutely adores cute things. Apparently PreCure comes under that, as the giant monster attacking the town is of no concern to her when she sees Cure Grace and Cure Fontaine for the first time. Seeing allies and enemies alike have the same reaction to Hinata’s reaction is pretty amusing.

I can’t help but feel that much of Nyatoran’s interactions with Hinata throughout this episode were a test – one that she passes, hence becoming Cure Sparkle. 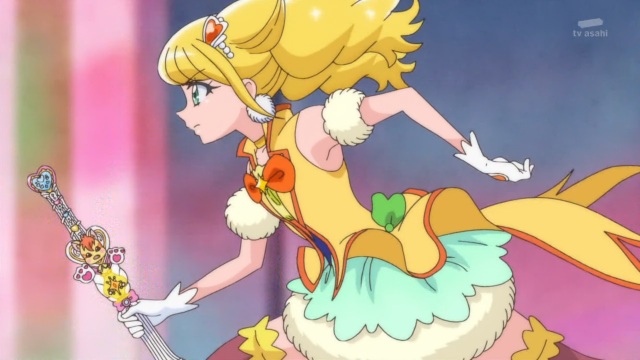 During the battle, Nyatoran has to tell Cure Sparkle that they purify their foes, rather than defeat them. A purified foe is a defeated foe, so I guess there’s not all that much distinction.

I also think we get the first instance of Cure Grace throwing a punch in this episode. Just a step closer to taking a page out of Hibiki Tachibana’s book, I suppose. Ultimately, though, it falls to Cure Sparkle to bring the battle to an end.

With that, our full team is assembled (for now)

I feel pretty confident in saying that Healin’ Good ♡ PreCure has got off to an incredibly strong start. Nodoka, Chiyu and Hinata have all had wonderful introductions, and the three have got a good dynamic between them.

Such a great debut for Cure Sparkle. I’m expecting good things from her – and Nodoka and Chiyu as well.