Chidori RSC is a twelve episode anime adaptation of the Rifle is Beautiful manga written and illustrated by Salmiakki. The director of the show was Masanori Takahashi, and it was written by Tatsuya Takahashi. Music was provided by Satoshi Hono. The studio that produced the anime was 3Hz.
Chidori RSC aired during the autumn 2019 season of anime (mostly), and is available to watch on HIDIVE.

Chidori RSC focuses on Hikari Kokura, who wants to join Chidori High’s light-beam rifle shooting club. However, as tends to be par for the course for girls’ club anime, said club has been disbanded. Thus Hikari takes it upon herself to find other club members to join her.
This show must set some kind of record, because by the end of the first episode, we suddenly have all four club members assembled – there’s next to no drama involved in recruiting them.

Our lead character in Chidori RSC is the aforementioned Hikari Kokura. Bright and full of energy, she is determined to compete on an Olympic stage in beam-rifle shooting. She is also the type of person who gets along well with everyone she meets. 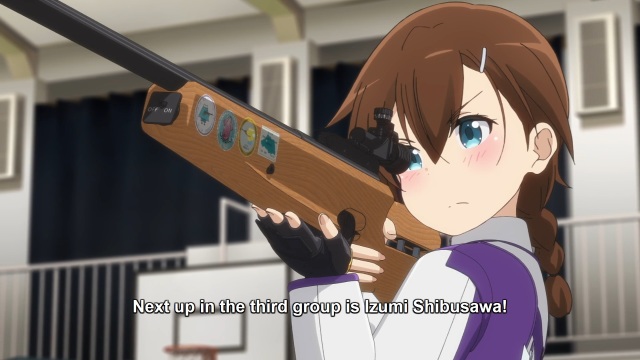 Next, we have Izumi Shibusawa. She is Hikari’s childhood friend, and has always supported her ever since their younger days. She cares a great deal for Hikari.

Next we have Yukio Igarashi, or Gacchan, as Hikari likes to call her. She is the quiet type, but her skills at beam-rifle shooting are almost second-to-none. She may not say much, but there does tend to be quite a bit going on in her head when she is focusing.

Finally, we have Erika Meinohama. She is also experienced in beam-rifle, and tends to be on the tsundere side of things. Yukio and Erika’s resemblances to Evangelion‘s Rei and Asuka respectively is probably a bit more than just coincidence…

The cast, and supporting characters, for that matter, are all just a lot of fun to watch. The Chidori Rifle Shooting Club members have great chemistry among themselves – and later, their advisor. 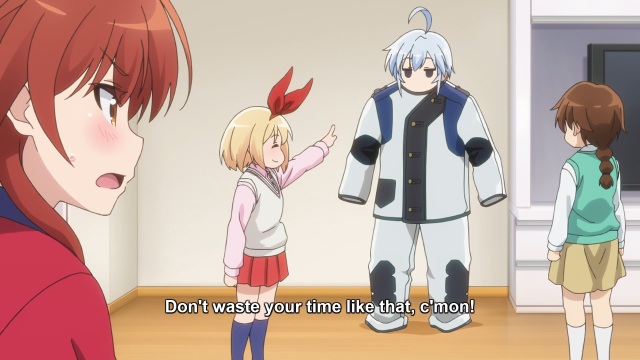 There’s also a very strong sense of humour running throughout Chidori RSC. Of course, comedy will depend on each individual’s taste, but I did find myself just laughing at the antics going on when things weren’t taking on a more serious tone. 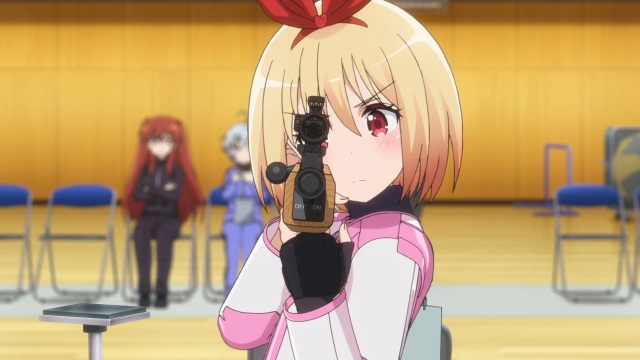 Naturally, a key part of Chidori RSC is actually the beam-rifle shooting. Early on, characters themselves state that it isn’t exactly the most thrilling spectator sport, and that does tend to come across with early practice sessions.
The show tends to let the rifle athletes do their shooting, whilst focusing on the conversations and reactions of those on the sidelines.

However, when actual competitions start up, Chidori RSC does manage to make watching the shooting a bit more thrilling – things like insert songs, and the characters’ inner monologues as they compete.
Practice sessions may not be the most interesting to watch, but the show does seem to know just what to do to actually get its viewers hooked when the beam-rifle shooting actually matters.

Being a Girls’ Club anime, you might expect to see some yuri – and Chidori RSC certainly delivers some of that. Most of it comes from Hikari and Izumi, but there are definitely some other characters worth looking out for when the Chidori Rifle Shooting Club starts competing against other schools.

When all is said and done at the end of the day, Chidori RSC is just a whole lot of fun – and it effectively uses its characters to communicate that.

Score: 10/10
A brilliant sense of humour, fun character interactions and some actually intense sessions of beam-rifle shooting make the show a must watch for Girls’ Club anime enthusiasts.

I enjoy writing, manga, anime and video games, so naturally here on my blog, you will find anime reviews, Nintendo news and other such things that I deem interesting.
View all posts by Rory →
This entry was posted in Rory's Reviews and tagged Autumn 2019 Anime, Chidori RSC, Girls' Club, Rifle is Beautiful, Rory's Reviews. Bookmark the permalink.