Chidori RSC Episode 9: I am a Heroine

With all competing teams gathered in Hiroshima, the time for the rifle shooting Nationals has arrived. The Chidori Rifle Shooting Club worked hard to secure a place there, but the competition is only getting stronger.

Could be worse: Yuko could be driving

In this episode, all the competitors gather at Tsutsuga Rifle Range for the National High School Rifle Competition. The first day is practice, and that is followed by the first round. There are some familiar faces competing, but we also get introduced to a few new characters.

Hikari reveals her practice has not been going well

The Nationals take place over the course of a few days, and the first day is for practice. It gives a chance for the competitors to get used to the atmosphere of the place. That’s all well and good for those who are shooting, but everyone else has to try and make their own entertainment. There’s not much going on if you’re not shooting.

Erika thanks Izumi for contributing towards the cost of the visor

The big competition is drawing ever closer, but the Chidori girls are still pretty much the same as ever. Their interactions are still a whole lot of fun, providing plenty of amusing moments.
Let’s shift focus to some of their competitors.

The current champions are from Hozumi High, and one of their best rifle athletes is Serena Nitta.

Accompanying Serena is Sayu, who may just be struggling to keep her hands to herself. Serena seems to be her favourite victim, though. 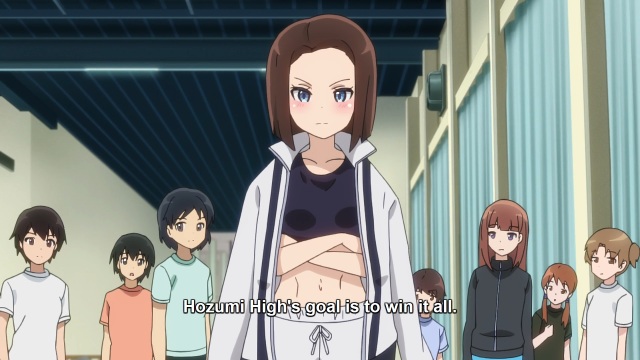 Having meet the current champions, I like them already. Strong first impressions from these three ladies, and definitely strong rivals for Chidori.

Yukio is first to shoot in the team competition

The first round of the team competition begins, with Yuko not exactly making the best choice when it comes to the order of the team. Well, that’s what Erika seems to think, but I suspect that Hikari will thrive with the pressure of going last.

With the first round of the Nationals underway, rivalries form between the girls who are shooting next to each other. Let’s just say some have a greater focus on their target than others.

Neneko and Ruri are an example of a rivalry forming, with this one apparently being a thing since the practice round. Also, out of this pair, I have to say that I like Ruri just a little more after seeing how she acts after the round ends.

Apparently Yukio’s mind tends to wander when she is focusing

I really enjoyed the insight into Yukio’s thoughts whilst she was shooting. I think there’s a bit of stream of consciousness going on there, and that seems to get results.

On the subject of results, I won’t give away how the first round went here. I will say, however, that suddenly Izumi suddenly finds Yukio as a rival. Not in rifle shooting, though. Or maybe, Hikari is actually the one going for the harem route. I don’t feel that would disappoint Yuko too much, though.

I enjoy writing, manga, anime and video games, so naturally here on my blog, you will find anime reviews, Nintendo news and other such things that I deem interesting.
View all posts by Rory →
This entry was posted in Episodic and tagged Autumn 2019 Anime, Chidori RSC, Episode 9, Episodic, Erika Meinohama, Hikari Kokura, Izumi Shibusawa, Yukio Igarashi, Yuko Tsurumaki. Bookmark the permalink.