Thoughts on Furatibeya: A Room for Two Volume 3

The third volume of Yukiko’s Futaribeya: A Room for Two gives us more of the everyday lives of Sakurako and Kasumi, as well as their friends and family.
This volume contains chapters twenty-three through to thirty-one, two special chapters and one bonus chapter. 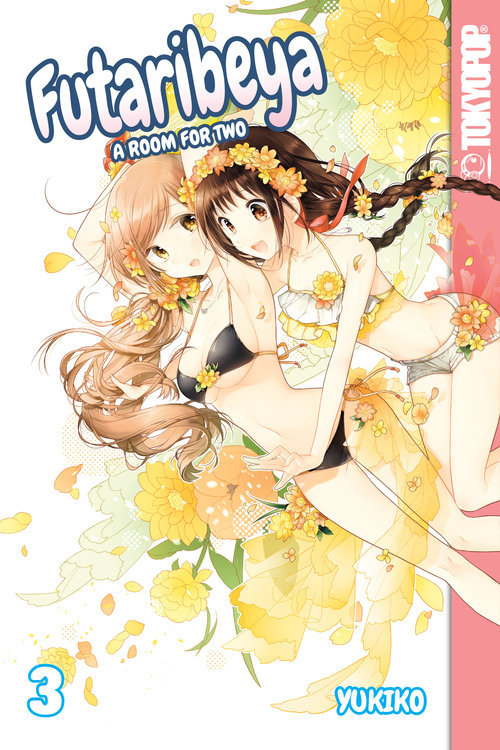 Sakurako Kawawa and Kasumi Yamabuki couldn’t be more different from one another… but perhaps the saying’s true that opposites attract! Having completed their freshman year as roommates and inseparable friends, Sakurako and Kasumi are ready to tackle their second year of high school and all the new experiences waiting for them. Even when it’s cold outside, there’s always warmth to be found in friendship – and, of course, sharing mystery hotpot with their new underclassmen friends!

After having read the previous two volumes of Futaribeya, you’d come to expect more of the same type of thing from the third. That is exactly what it delivers, with Sakurako and Kasumi growing ever closer and some developments for the other characters.

Quite a span of time is covered in this particular volume, as we get Christmas, New Year’s and Valentine’s Day here. I suspect that Kasumi might favour Valentine’s the most out of all of them, especially taking into account how much chocolate she receives.
Sakurako may have worked out the quickest way to Kasumi’s heart (through her stomach) previously, but it seems that Kasumi knows how exactly to get her way with Sakurako when she wants to.

We get a little more from Seri and Shouko in this volume. Their interactions are a lot of fun, and it will be interesting to see if their relationship goes beyond Shouko playfully teasing Seri. There may be hints about it developing into something more.
Another character who gets a fair amount of page time is Hinako, Sakurako’s little sister. She gets an entire special chapter to herself, which is a look at one day in her life. It’s a charming chapter.
A new character is also introduced that Hinako seems to quickly take to: Fujiho. I imagine we’ll be seeing a lot more of both Hinako and Fujiho going forward.

Getting back to our main characters, Kasumi makes an interesting discovery about Sakurako during a cherry blossom viewing party. It is something that Seri almost ends up experiencing for herself as well, but Kasumi quickly puts a halt to that.

I find myself sympathising with Kasumi quite a bit, especially when she is being incredibly lazy. I’ve never stopped eating just because chewing food is too much effort, though…

Futaribeya: A Room for Two is something that I have really enjoyed reading, and I’d even go as far to say that the third volume is the best one yet. That I’ve read, at least. An excellent read.

I enjoy writing, manga, anime and video games, so naturally here on my blog, you will find anime reviews, Nintendo news and other such things that I deem interesting.
View all posts by Rory →
This entry was posted in Manga and tagged Futaribeya: A Room for Two, Manga, Volume 3, Yukiko. Bookmark the permalink.