Time for us to go back to Japari Park once more, with the Kemono Friends á la Carte manga anthology. This anthology contains short stories based on the Kemono Friends franchise, most particularly the first season of anime.
KADOKAWA CORPORATION, Tokyo, first published the manga in Japan in 2017, and in 2019 Yen Press licensed it for an English release.
This anthology has three colour illustrations by different artists, as well as manga contributed by seventeen more artists. 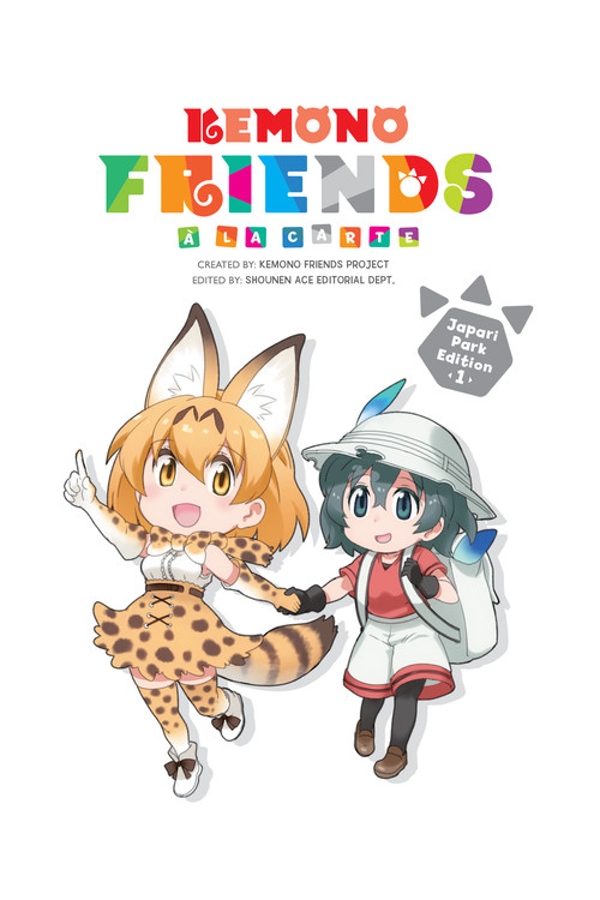 Return to Japari Park and the lovable world of Kemono Friends in this manga anthology! Kaban, Serval, and the rest of the Friendsare having a wonderful time!

If the second season of Kemono Friends left you feeling a little cold (and it most probably did with all the questions it left completely unanswered among other things), then you might find a little more solace with Kemono Friends á la Carte.
Admittedly it does not further the lore of the Kemono Friends universe in any way, but it does give us plenty of cute and funny stories about the Friends interacting with one another.

The focus is on the characters who appeared in the first season of the anime, though things aren’t exactly balanced. Obviously Kaban and Serval crop up quite a lot, but it seems the stories for this particular volume are skewed towards the Japari Café. As a result, expect to see quite a lot of Alpaca Suri and Crested Ibis.

Not every character that appeared in the anime gets a story in this anthology, though. Most notably, the only appearance for Fennec and Common Raccoon is one of the colour illustrations.
Certain other characters just get cameos in this anthology. Not every single Friend could be crammed into a single volume, hence the fact that this one is only the first. Perhaps the Friends who didn’t get much page time here will fare a little better in the next one.

Ask me to pick out a favourite story, and I’d pretty much just have to say any one that prominently features Kaban and Serval together. Sai Madara’s story, Serval-chan’s Care actually kicks off the anthology, and it is definitely up there as one of my favourites.

When it comes down to it, Kemono Friends á la Carte is a cute, fun read. Definitely worth a look for Kemono Friends fans who want more from Japari Park.