Cells at Work! takes us inside the human body to see the work of the cells that goes on every day. In the spin-off Cells at Work! Code Black, we are shown what the cells have to go through in an incredibly unhealthy body. This also includes them having to cope with events of a more adult nature.
Cells at Work! Code Black‘s story is by Shigemitsu Harada, and illustrated by Issei Hatsuyoshiya. Kodansha Comics licensed the manga for an English language release.
The first volume contains chapters one through to five. 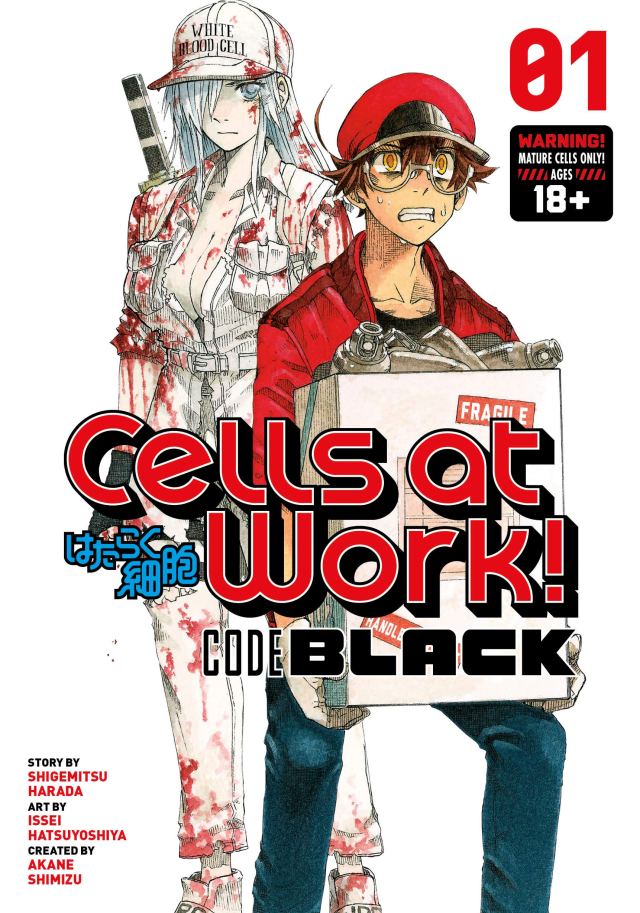 The content of adults
There are trillions of cells in the human body, and they all have to work hard to keep that body alive. But what if that body isn’t taking great care of itself? What if that body smokes too much? Or drinks too much? What if that body forgets to use protection? Why, it might find itself with all manner of dysfunction, and who’s going to have to pick up the pieces? It turns out the same immune cells that fight off the common cold also have to deal with troubles of a distinctly more adult nature…

Seems like Cells at Work! Code Black is what happens when someone takes Cells at Work! and decides to make it much more edgy. Cells at Work! could get pretty gory at times, but Code Black takes it up a notch, with far more graphic images and an increase to fanservice as well.
To say nothing of what the cells have to cope with in this first volume: drinking, smoking, maintaining an erection, and sexually transmitted infections among others.

You’ll notice from the front cover that Code Black has a male Red Blood Cell and female White Blood Cell as two of its central characters. It seems the main reason we have a female White Blood Cell is clothing damage; her fights often result in clothing damage, and this spin-off has no qualms about showing bare breasts. All the White Blood Cells are subject to this.
Then there is the Kupffer Cell, a type of macrophage. It is depicted as a topless woman, for whatever reason.
Add on to that the Gonococci, and it becomes very obvious why this manga carries an 18+ warning. The Gonococci can only really be described as penis tentacle monsters, and they aren’t exactly easy foes for the White Blood Cells to take down – I’m sure you can guess what direction that particular fight winds up taking.

Code Black may deal with more adult problems, but it still presents itself as an “edutainment” manga, with text boxes to explain the various cells or processes in the body.

As you can imagine, the cells of Cells at Work! Code Black have their work cut out for them, and their lives are constantly high stress. This manga depicts that, and it is tough to imagine that this spin-off will end happily with all the stresses the body goes through.

Akana Shimizu’s Cells at Work! is a charming manga, and so too is the anime adaptation. If you got into the series through that, then I can see Code Black being something of a shock to the system if you are unprepared for it.
There’s not the same charm to be found here; as I mentioned before, it is more edgy than anything.
Cells at Work! Code Black will certainly not be for everyone, but if you don’t mind things on the edgy side with a more adult nature, than you might get something out of this manga spin-off.

I enjoy writing, manga, anime and video games, so naturally here on my blog, you will find anime reviews, Nintendo news and other such things that I deem interesting.
View all posts by Rory →
This entry was posted in Manga and tagged Akane Shimizu, Cells at Work! Code Black, Issei Hatsuyoshiya, Manga, Shigemitsu Harada, Volume 1. Bookmark the permalink.