For a while there, I thought that this would be the final episode of Aikatsu Friends! Shining Jewel. Turns out it has at least one more, but either way the end is approaching and all too quickly.
Aine, Mio and the others will all be sticking around for Aikatsu on Parade!, but I suspect that shall be focusing mostly on its crossover aspect. For now, though, my focus is solely on episode twenty-five of Aikatsu Friends! Shining Jewel, in which the Jeweling Festival comes to an end. 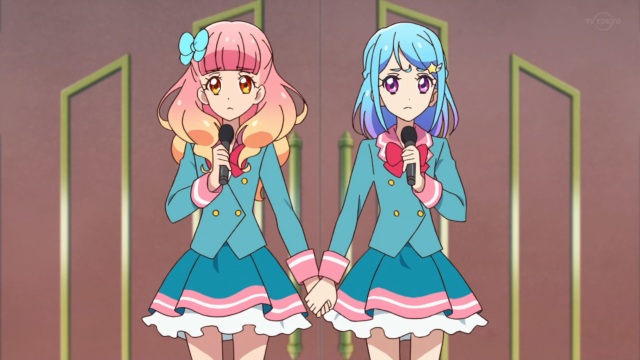 In this episode, Aine and Mio have to make a difficult decision about their performance as the weather in Solvette takes a turn for the worse. It looks like the Jeweling Festival is about to be put on ice, but not everyone is ready to give up.

Sakuya & Kaguya join the others in shouting into the wind

Seeing everyone who Pure Palette have supported in some way or another come together and defiantly shout into the wind was a great scene. It just felt great seeing all that support for Pure Palette; so much so that their friends are ready to defy nature and the gods.

Aine and Mio hear the words of support from their friends

There’s some quite emotional moments going on this episode, too. Aine and Mio’s decision is one, but also their reaction to hearing all the other girls shouting their support is another.

A circle of Friends

In case it hasn’t been made absolutely clear by now, this episode is full of great moment after moment. The episode could have just showed everyone joining hands in a circle, but it goes beyond that and gives us a really nice sequence as well. 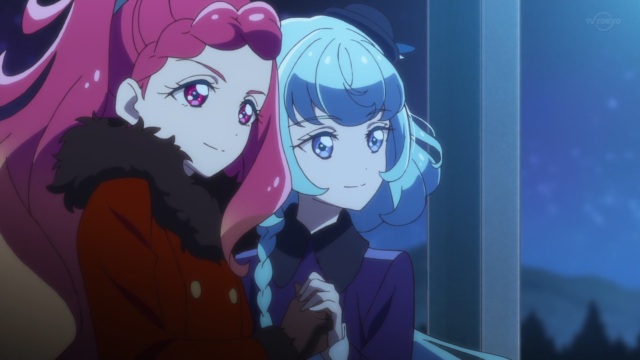 Hibiki and Alicia share a moment under the stars

This may be Aine and Mio’s episode, but I Believe manage to sneak in what can only be interpreted as a romantic moment.

What a fantastic episode. I figured the end of the Jeweling Festival was going to be something special, and it turns out I was right. There’s certain parts that I haven’t even touched upon, because they are too good to spoil.
It has been quite a journey ever since Hibiki’s introduction, and I am so glad that I followed it all the way up to the conclusion.

If this had been the final episode of Aikatsu Friends! Shining Jewel, I would have been happy. There are some minor issues I have, but the strengths more than make up for those. As it stands, though, there is one more episode left; an epilogue, by the looks of it.

What an incredible experience Aikatsu Friends! has been.