PreCure’s goal of obtaining all twelve Princess Star Colour Pens is in sight in the thirty-first episode of Star ☆ Twinkle PreCure, but obviously their enemies don’t intend to let that go unchallenged.

Some great expressions in this episode

In this episode, PreCure return to Earth, with Topper from the Starscape Alliance in hot pursuit. He asks the girls to join the Starscape Alliance, but the response he gets is not something he expected.
The final Princess Star Colour Pen shows up, but Cure Star will have to fight Garuouga in order to get it.

Seems like Hikaru’s onigiri is really quite popular with extraterrestrials

The first part of this episode focuses on Topper and his efforts to recruit PreCure into the Starscape Alliance. Unfortunately for him, the girls have other commitments. We get some more light-hearted moments in this part of the episode, too – because things get a little more serious shortly.

Topper regrets his lack of power

“With great power comes great responsibility” could be a well-known phrase that applies to the conversation Topper has with Hikaru. She is PreCure, and it is her duty to protect; something that Topper failed to to do.

Topper’s conversation with Hikaru is cut short by the arrival of Garuouga; it is the first time we are seeing him fight any Cure directly. Unlike the other enemies, Garuouga relies on his own strength – which has been augmented by Darknest.

Garuouga throws off his cloak

Cure Star and Garuouga fight on the moon – something which amused me quite a bit considering the events of Symphogear XV episode 10. No lunar ruins in sight, but we do get a nice fight sequence. The fights tend to be pretty good whenever an antagonist gets directly involved, and this time around is no exception.

The fight does not go well for Cure Star

During the fight, Garuouga has some things to say about Cure Star’s desire to protect. Perhaps he failed to protect something in the past, and that led him to serving Darknest. That’s just a guess, it could just be typical villain talk. 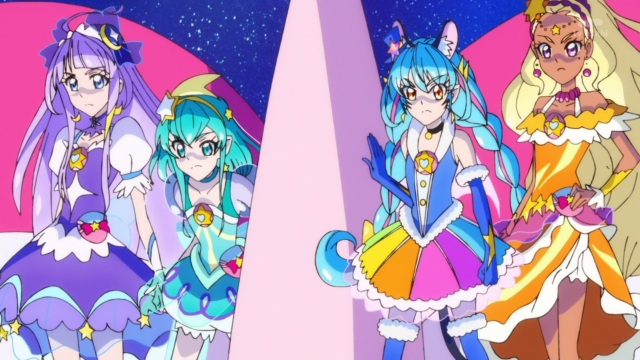 You’d think the arrival of the other Cures would mark a turning point in the fight, but Garuouga is remarkably resilient, even shrugging off the Cures’ special attacks. Fortunately for the Cures, Darknest’s power is a finite resource. 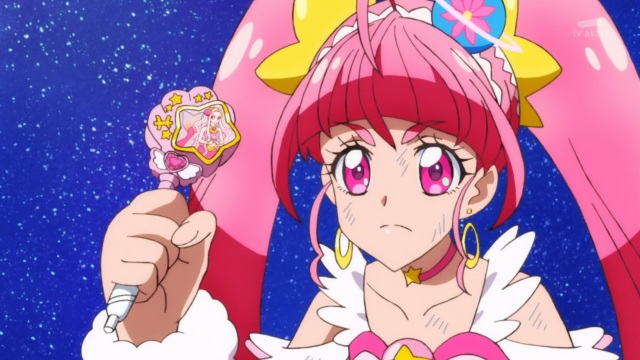 During the fight, Cure Star manages to grab the final Star Colour Pen from her foe. Once he retreats, it is time for one more trip to the Star Palace.

That’s all twelve Princess Star Colour Pens gathered together, and their power has a surprise in store for Fuwa.

That caps off this episode of Star ☆ Twinkle PreCure, and it was a great one. The fight against Garuouga has to be my highlight; some really enjoyable animation there. It also helps that Garuouga is the biggest threat the Cures have faced; though I guess it does depend on how much of that was Darknest’s power.
Still a great fight, though.

Fuwa’s transformation is all right, I guess. I don’t dislike it, but I’m not sure why it is necessary to have Fuwa transform at this point. Perhaps the next episode will provide some insight into all that.
We haven’t really had the chance to see what the power of all twelve Princess Star Colour Pens can do, but what we have got so far is a little underwhelming. They were built up as being able to grant any desire, or something along those lines, and all we have at the moment is Fuwa becoming a unicorn. No matter how you look at it, she is still the cute mascot fairy.

Looks like we might get some more background on Garuouga next time, as well as discover just what is going on with Fuwa.