GRANBELM Episode 9: Establish an Accord

The number of participants in GRANBELM is steadily dwindling. In episode nine, the remaining girls prepare for the next round. 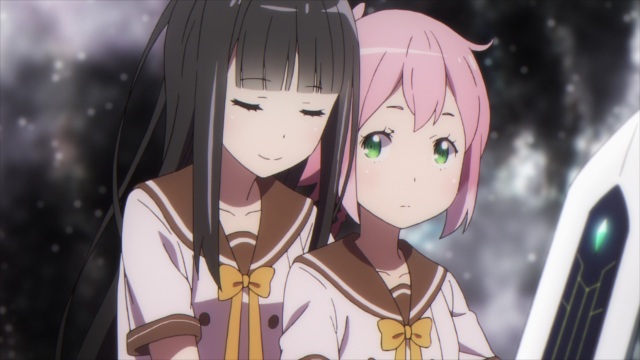 Shingetsu helps Mangetsu learn how to summon a spirit

In this episode, Mangetsu trains to be able to summon a spirit, Suishou continues to get into Kuon’s head, and the next round of GRANBELM starts.

As far as the antagonists of GRANBELM go, I’m going to go ahead and say that I prefer Suishou to Anna. Not to disparage Anna’s constant rage, but I do prefer the more cold and calculating villains – Suishou seems to fit that bill quite well. Ever since she has been receiving more focus, she has been wonderfully sinister.

The GRANBELM battle in this episode also showcases one of the reasons I prefer Suishou over Anna. Suishou will fight tactically, taking advantage of fog of war to turn Mangetsu, Shingetsu and Kuon on each other. Even when that tactic is countered, she has something else planned, and it is quite the impressive sight.

I could go on about Suishou, but Kuon also gets her moment to shine in this episode, too. After all the suffering she has had to endure at the hands of Suishou, Kuon is able to overcome that as she realises a certain truth about her sister. It is cathartic to see her come back from that.

Suishou has a surprise in store

Finally, there are several points in this episode where it is on the verge of revealing something about Mangetsu, but it never quite happens. The worst case of this comes right at the end of the episode, and the stinger that follows the credits just makes it worse.

A certain truth regarding Mangetsu is coming to light, but that will have to wait until the next episode.

The quality of the recent episodes of GRANBELM has been very high, and this episode continues that trend. With less characters to juggle, it means more time is spent to developing them and exploring their characters – Suishou has certainly reaped the benefits of this.
The spirits had an extra element to the GRANBELM battles, too. Seems they are quite useful for evening the odds. All in all, great stuff.

I enjoy writing, manga, anime and video games, so naturally here on my blog, you will find anime reviews, Nintendo news and other such things that I deem interesting.
View all posts by Rory →
This entry was posted in Episodic and tagged Episode 9, Episodic, Granbelm, Mangetsu Kohinata, Shingetsu Ernesta Fukami, Summer 2019 Anime. Bookmark the permalink.

1 Response to GRANBELM Episode 9: Establish an Accord