Aikatsu Friends! Shining Jewel Episode 14: A Scale as Vast as the Earth

The fourteenth episode of Aikatsu Friends! Shining Jewel is one that focuses on Honey Cat. They’ve got some new work coming their way, and the person they are working with is someone that we know very well.

Honey Cat are asked to advertise a new bag being produced by a company that they worked with before. However, when the director asks for their input, Honey Cat struggle to come up with anything on a “scale as vast as the Earth”. Some inspiration may arise from their fellow idols, though. 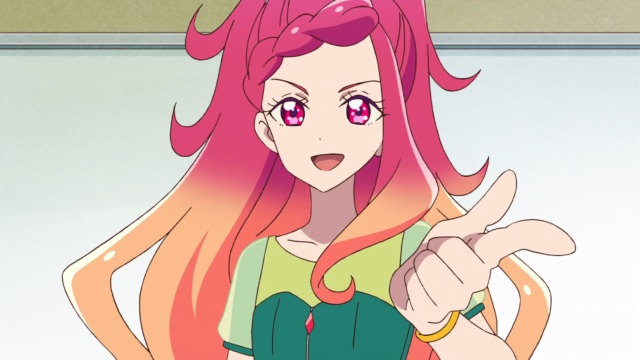 Hibiki is the director for the new advert

This may be a Honey Cat episode, but they end up working alongside Hibiki. Hibiki is the director of the advert, and I certainly won’t complain about her getting more appearances. She is the second best Hibiki of the summer 2019 season, after all.

Maika and Ema in their lacrosse uniforms

Honey Cat really struggle to come up with any ideas for the advert over the course of this episode. Sitting talking about it gets them nowhere, so they decide to try a more active approach. That doesn’t seem to help much, either. 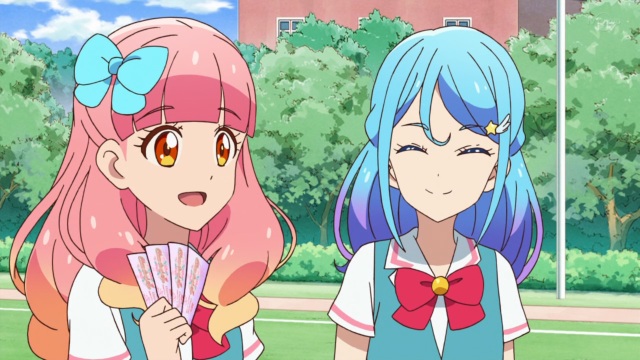 Aine and Mio invite Ema and Maika to Karen’s concert

Generally, Aikatsu Friends! presents one performance per episode. This one is an exception, as we get a Karen performance – one which Pure Palette and Honey Cat go and see together.

Seeing Karen also happens to remind Ema & Maika about the time they bumped into Karen on their world tour. I hope we get to see more snippets of Honey Cat’s world tour in future episodes – seems that taking Friends to foreign places leads to great things.

With some inspiration from Karen (and almost certainly Hibiki as well), Honey Cat are able to come up with something for their new advert. There’s a little bit of drama before they can start filming, but that gets resolved with everyone working together.

We had a Karen performance earlier, but it is Honey Cat’s turn this time around. I’ll admit to being a little disappointed that they went with “Let’s Find It♪” rather than a new song, but I’m sure they’ll get one in the not too distant future – probably after Ema and Maika obtain Jeweling Dresses.

Throughout this episode, Ema and Maika were unsure of what comes next for Honey Cat after their world tour. Ultimately, though, they are able to hit upon a rather ambitious goal: follow in Hibiki’s footsteps and go into space. Who knows, maybe they’ll bump into a few magical girls up there?

As ever, Honey Cat do their thing, and when the spotlight falls on them they deliver. As I already mentioned, I would love to see more from their world tour, and episodes like this certainly provide a way for that to happen.
Perhaps they could use their experiences from foreign countries to solve problems that come up in the present, or something like that. Honey Cat have done quite a bit away from the sight of us viewers, after all.
So overall, a very nice Honey Cat episode.

I Believe next episode will be a good one, as it focuses on Hibiki and Alicia. The title of the episode is also genuinely “Heart-throbbing Friends Date”, and that has certainly got me very interested in what is coming next.