There is a drought of games this month… is what I would say if I was a complete liar. There’s perhaps too many games due out this month, making it tough to pick just one for my game of the month for July 2019.
That is exactly what I shall be doing though. Before that, however, a list of honourable mentions.

Honourable Mentions
– Bloodstained: Ritual of the Night – A must buy if you like the Metroidvania genre. Probably best on anything that’s not the Nintendo Switch, but that’s the version I got. Patches are in the works to improve it, though.
– Super Neptunia RPG – The first Neptunia title on a Nintendo console and it is a side-scrolling 2D RPG. I got the Limited Edition and unboxed it here.
– Senran Kagura: Peach Ball – The second Senran Kagura spinoff release on the Nintendo Switch. It is a pinball game.
– Dragon Quest Builders 2 – The second Dragon Quest Builders game. I enjoyed both the first game and the demo for this one, so I’m quite looking forward to getting stuck into the sequel.
– God Eater 3 – A demo recently released on the Nintendo eShop showed that God Eater 3 has quite a few similarities with the Monster Hunter games, and I am into that.

That is all the honourable mentions out of the way, now for the game that I really want to focus on for this month. 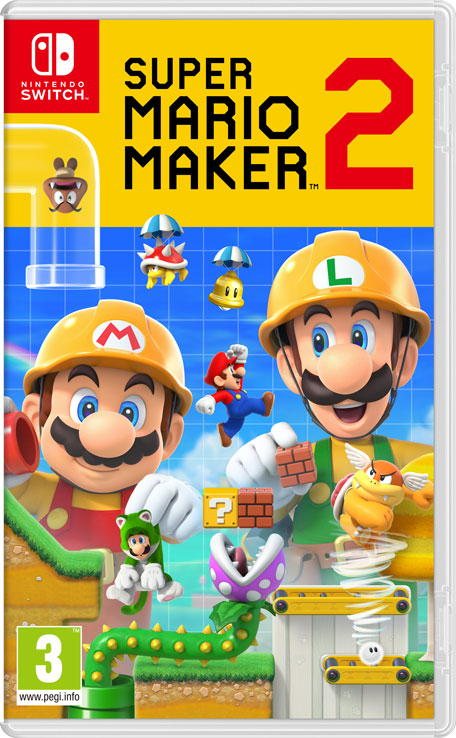 For the second time, Nintendo is handing the reins over the players and asking them to create their own Mario levels with Super Mario Maker 2.
New additions to this game include slopes, the Super Mario 3D World style and new power-ups. There’s also plenty of familiar tools to help you build levels, with all the new stuff mixed in as well.

Super Mario Maker 2 also provides a story mode, in which Mario has to complete courses in order to rebuild Princess Peach’s castle. This courses were created by Nintendo, and showcase a lot of what you are able to create in the maker mode.

You also have the ability to play the courses that other players have created, whether directly searching for them or as part of the course world’s endless mode. The thing about custom levels is that the quality will vary. Still, it is worth it when you stumble upon an amazing course.

I have a few ideas for courses in mind – perhaps a vertical level that heavily utilises slopes, or turning what is typically a platformer into a side-scrolling shoot ’em up. Some fans have even taken to recreating other games in Super Mario Maker 2, so that’s an option as well.

There’s speculation that more game styles will be added in the future, so that is something to keep an eye out for. It doesn’t seem to far-fetched to guess that there may be Super Mario Land and Super Mario Land 2: 6 Golden Coins themes in store. Maybe they’ll complete the trilogy and give us a Wario Land: Super Mario Land 3 style as well, but I’m just speculating at this point. Also, Wario has a completely different moveset to Mario, so maybe not.
I guess Super Mario Bros. 2 could also be a possibility, though the mechanics in that game are different to most other Mario titles.