Everyone has returned safely back to Japan in the thirteenth episode of Aikatsu Friends! Shining Jewel, and now Alicia has to find someone to stay with whilst she gets back into Aikatsu. Hibiki has a full schedule, but fortunately one half of Love Me Tear is willing to lend a hand.

Now that Alicia is in Japan, she plans on getting back into her Aikatsu. She’ll also need somewhere to stay. The obvious choice would be to stay with Hibiki, but Hibiki’s schedule won’t allow that for the time being. Fortuately, Karen is willing to let Alicia stay at her place.

Alicia meets some of her fans

After sleeping at Karen’s place for the night, Alicia is ready to face the next day and start up her Aikatsu again. She believes in greeting each and every person she works alongside, and is more than happy to shake the hands of her fans. 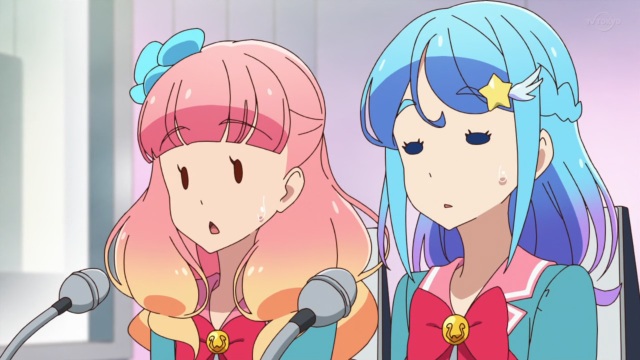 Alicia gets to be a guest on Star Harmony Radio, which is hosted by Aine and Mio. Everyone decides that Alicia should keep the fact that she is a princess under wraps, but she provides some rather… unique answers when it comes to questions for her. 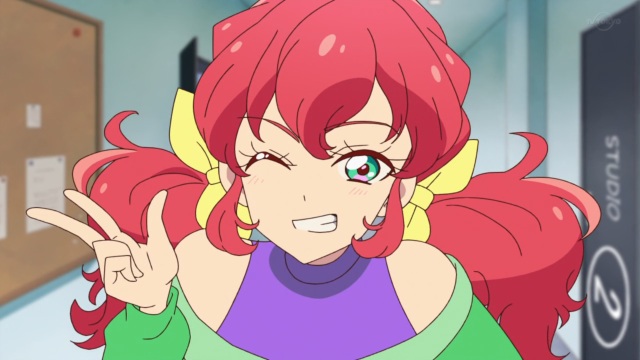 During the night, however, Karen is tending to all the fan letters she has received. Alicia happens to catch her in the act, and this leads to Alicia worrying about what people will think about her. Karen pretty much tells her that it is something she doesn’t really need to worry about.

Moving on, and Alicia is able to secure her own radio show after the interview with Pure Palette. Karen has her own show coming up as well. Hibiki, Alicia, Mirai, Aine and Mio all attend the show, where Karen puts on quite the performance.

Karen’s performance is a resounding success, and it inspires Alicia to be honest about who she is on her radio show. Thus, Alicia announces that she is the princess of the Principality of Solvette, but first and foremost, she is an idol.

A nice episode that let us learn a little more about who Alicia is. It also marks her return to Aikatsu, so I believe I Believe officially reuniting is on the cards. I imagine that will be quite the spectacle when it finally comes to be.
Karen also got some nice focus in this episode – she may be amongst the best Friends, but even she is willing to make time for her fans. It was nice to see Mirai show some concern over her, too – after all, who else but her partner would know that she goes above and beyond for Aikatsu?

So yeah, pretty good episode I’d say. Next time, we shall be getting a Honey Cat episode.