Our journey into Gensokyo comes to an end with seventh and final volume of Forbidden Scrollery, in which Kosuzu discovers a few truths about the world she lives in.
This volume contains chapters forty-six through to the final chapter, fifty-three. 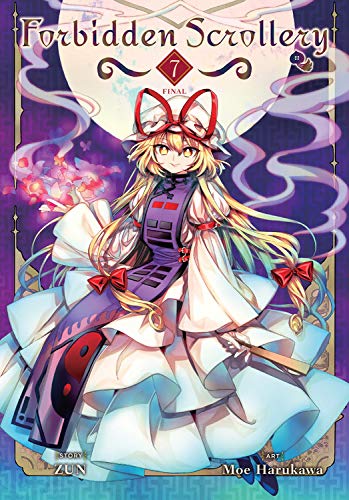 When Kosuzu learns the origin of demons and the extent of their influence, her discovers compel her to pursue the “truth” of Gensokyo. What awaits Kosuzu on this journey of revelation…? It’s time to unfurl the mysteries of the demonic picture scroll in this final volume of Forbidden Scrollery!

The story of Forbidden Scrollery comes to an end, and the end starts with a meeting between Akyu and Mamizou. That ultimately leads Akyu to telling Kosuzu that a few of her customers are not exactly what she may think they are.
Akyu also happens to inform Reimu of Suzunaan’s special customers, just so she is aware of the situation.

Besides the usual visitors, Kosuzu gets a rather unusual visitor to her place in this volume as well. It’s a character who tends to be a rare sight around Gensokyo, and said encounter ends up with Kosuzu completely disappearing from Gensokyo.

The final volume of Forbidden Scrollery brings to light the relationship between the humans and youkai of Gensokyo, and how they affect each other. It also continues to explore how the Human Village is an important part of Gensokyo, which the previous volume took a look at as well.

Overall, Forbidden Scrollery is a manga that I would recommend any Touhou fan reads. Kosuzu is an fun new character, and there are plenty of familiar faces to be seen as well – characters such as Reimu and Marisa who are actively involved in the plot, or others who just make cameos.
I wouldn’t recommend Forbidden Scrollery to anyone who is unfamiliar with Touhou, though. Whilst Kosuzu gets a proper introduction, the first volume seems to bring in characters who it presumes the reader is already familiar with.

When it comes to the translation, its mostly fine. The biggest issue I have with it is ‘Akyu Hiedano’ – it should either be Hieda no Akyu (like fan translations use) or Akyu Hieda.

But yeah, overall, a fun manga to read that expands the world of Gensokyo beyond the games – giving us a more detailed glimpse into the Human Village and where it stands in Gensokyo’s hierarchy.

I enjoy writing, manga, anime and video games, so naturally here on my blog, you will find anime reviews, Nintendo news and other such things that I deem interesting.
View all posts by Rory →
This entry was posted in Manga and tagged Forbidden Scrollery, Manga, Moe Harukawa, Touhou, Volume 7, ZUN. Bookmark the permalink.