The ninth volume of Magical Girl Site introduces a few new magical girls, and shifts focus completely away from Aya and the others.
This volume contains chapters fifty-six through to sixty-four. 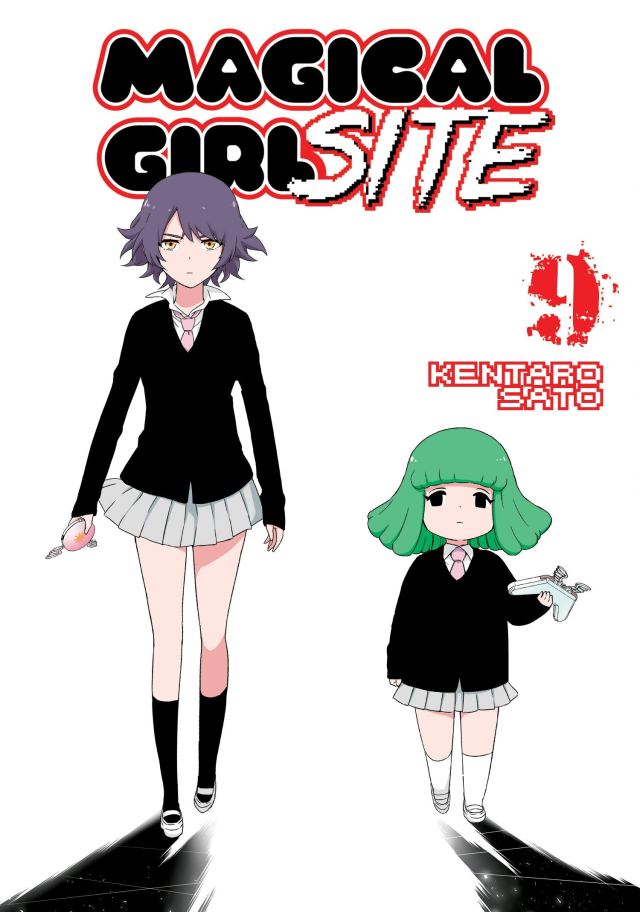 Your wand will come from cyberland…
Its powers soon will rest within your hands.
While Aya and the others are fighting for their lives, the daughter of a serial killer is dealing with her own struggles. Not only has Komura Kayo become the target of bullies in the wake of her father’s murders, but her mum can barely get out of bed. Will a gift from Magical Girl SITE give her the power to fight back or lead her down an even darker path?

For this volume of Magical Girl Site, you can forget about seeing the continuation of Aya’s story for the time being. Instead, we are introduced to Kayo Komura. Let’s see: her younger sister was murdered, her father killed the boys responsible and she is bullied at school everyday. Sure enough, all these things are the recipe for a magical girl, and Kayo receives a wand from the Magical Girl Site.

As is par for the course for any magical girl, Kayo suffers quite a lot. The one friend she has gets dragged into trouble as well, and Kentaro Sato provides quite a depraved situation for him to suffer through – very similar to the situation with Aya’s brother and that detective. So yeah, there’s some quite unsettling stuff going on in this volume.

Other characters introduced include Kayo’s only friend – they’ve known each other since childhood. He’s introduced by flipping Kayo’s skirt – whilst he doesn’t deserve what he goes through in this volume, I can’t really bring myself to like him all that much.
A character I do like, though, is Sakura Sakaki – another magical girl. She’s searching for a magical girl herself, though that’s about all she has to go on for the time being.

Sakaki also suggests to Kayo that her sister was murdered by a wand from the Magical Girl Site, which leads her to investigate into it. Of course, it’s not long before she starts comes across an antagonistic magical girl, because that’s just the way these things tend to go.

This volume of Magical Girl Site is all right, I suppose, but it’s not entirely clear how Kayo and Sakura fit into the overall plot just yet. I would have preferred to see Aya’s story continue on, but this is what we get instead.
We’ve seen plenty of girls suffering before, and yet here we are once again. I feel like this volume will make much more sense in context after reading future volumes of Magical Girl Site, but for now it just feels like the main plot has come to a screeching halt in favour of focusing on something entirely different.

I enjoy writing, manga, anime and video games, so naturally here on my blog, you will find anime reviews, Nintendo news and other such things that I deem interesting.
View all posts by Rory →
This entry was posted in Manga and tagged Kentaro Sato, Magical Girl Site, Manga, Volume 9. Bookmark the permalink.