Fake news, mystery novels, ghost stories and bad weather are all in store for Gensokyo in the sixth volume of Forbidden Scrollery.
This volume contains chapters thirty-eight through to forty-five. 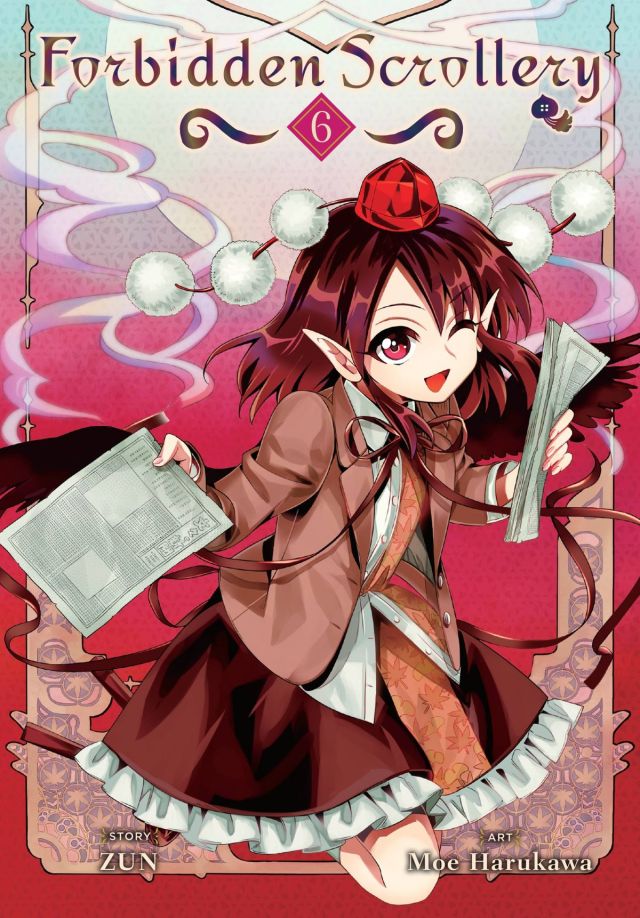 A rush of unusual gossip is spreading to the heart of Gensokyo, and a few clever individuals are each trying to steer the chaos to their own advantage. At risk is the delicate balance between humans and demons… Are dark days ahead for Gensokyo, or will hope come over the horizon? It’s no laughing matter when the very meaning of truth is in danger!

After Aya persuaded Kosuzu to sell the Bunbunmaru Newspaper in the previous volume, this one goes on to show that there is a rivalry between the tengu and bake-danuki. Aya goes up against Mamizou, though not directly – instead, the pair take different approaches to sharing information to sway human opinion on their respective sides.

There’s a fair amount of storytelling going on in this volume as well, with Akyu writing a series of murder mystery novels, and that is followed up by one hundred ghost stories.
Akyu’s novels do pretty well.
Then there is a real murder mystery… of course, since it happened in Gensokyo, at least one youkai is involved somewhere.
As for the ghost stories, Kosuzu comes up with the idea, and Reimu allows the event to be held at the Hakurei Shrine – because she could possibly earn some money from it, of course.
Anybody familiar with Touhou knows that the Hakurei Shrine gets a lot of non-human visitors, and the ghost stories event is no different. Still, that doesn’t stop everyone enjoying the event.

Finally, a typhoon arrives in Gensokyo. The poor weather doesn’t stop Kosuzu from wanting to get back books she has rented out to certain people, though the weather outside of the Human Village proves to be more extreme than she expects – she lands herself in some trouble, which leads to Reimu and Marisa doing some investigating.

This volume gives a clearer idea as to where the Human Village sits in Gensokyo’s hierarchy; it has a surprising number of youkai protecting it without the humans’ knowledge.
There’s a lot of fun stuff in this volume, too. Youmu Konpaku – half-human, half-ghost gardener – being scared of ghost stories is pretty amusing, and the ending of the event was neat, too.

Volume 6 of Forbidden Scrollery gives us an enjoyable read, whilst delving a little more into Gensokyo and the Human Village in particular.

I enjoy writing, manga, anime and video games, so naturally here on my blog, you will find anime reviews, Nintendo news and other such things that I deem interesting.
View all posts by Rory →
This entry was posted in Manga and tagged Forbidden Scrollery, Manga, Moe Harukawa, Touhou, Volume 6, ZUN. Bookmark the permalink.