Hibiki and company arrive in the Principality of Solvette in the eighth episode of Aikatsu Friends! Shining Jewel, where she finally comes face to face with Alicia.

Hibiki, Pure Palette, Tamaki and the Lovely Friends arrive in the Principality of Solvette, which is blanketed in snow. Doesn’t stop Aine and Mio from enjoying themselves, though. Actually, they seem extra flirty in this episode, which is a nice bonus.

Hibiki and the others are refused entry into Solvette

Hibiki tries to gain entry into Solvette, but the guards refuse. When Hibiki insists, the guards draw their swords. Fortunately, somebody else arrives who is able to sort the situation out. 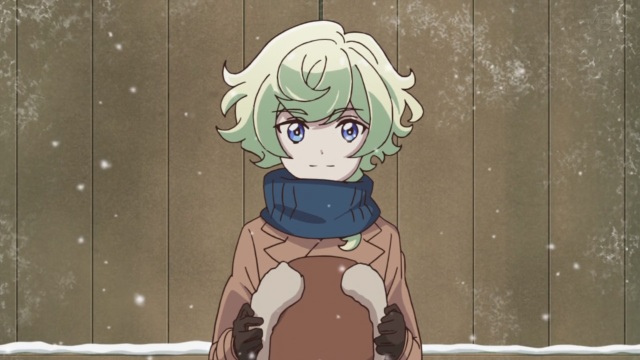 Alicia’s younger brother, Charles, tells the guards to let Hibiki and the others in. They obey, since he is a member of the royalty after all. As they make their way to their castle, they see the people of Solvette are all hidden away inside their houses.

Aine and Mio are great in this episode

Charles takes everyone into the castle, where they are granted an audience with Alicia. Aine and Mio are able to see Alicia for the first time, and sure enough, they find her to be very pretty.

Hibiki asks Alicia to be Friends once more, but Alicia refuses. She even goes as far to say that she will never be Friends with her again for all eternity. This seems to shake Hibiki down to her very core. Alicia tells Hibiki and Pure Palette to leave her country at once before departing.

Hibiki thought she was prepared to face Alicia, but being rejected in person takes a much greater toll on her than she expected. As she laments this, the king of Solvette shows up. He invites everyone to sit down and eat with him, during which time he explains the situation that Solvette faces.
An unnatural cold settled in, forcing the people of Solvette to hole up in their homes. The king tried to reinvigorate his people, but only ended up making his own health worse in the process. As such, Alicia felt she had to take responsibility for the country. 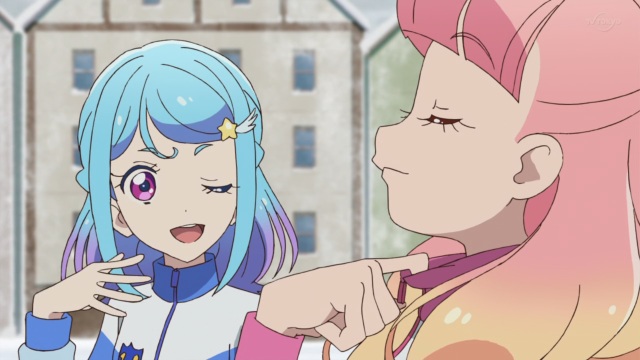 Pure Palette may be in a foreign country that is covered in snow, but that doesn’t stop them from doing Aikatsu. They invite Hibiki along as well, but she tells them that she is not in the mood. She does, however, offer a little advice for them.

A stage of ice and snow

Pure Palette believe that one way of reinvigorating the people of the Principality of Solvette is to perform for them, so they work together with Hibiki, her Lovely Friends, Tamaki and Charles to build a stage out of ice and snow. Pure Palette put on a performance, which brings smiles to the people of Solvette.

Seeing the happy faces of the children, Hibiki reminisces back to when she and Alicia would do Aikatsu together. Alicia’s smile was as brilliant as a thousand suns, and she laughed from her heart.
A blizzard suddenly begins, destroying the stage in the process. We end with Alicia clutching an unpolished gem.

Aikatsu Friends! Shining Jewel continues to deliver. We finally get Hibiki reunited with Alicia, though their meeting did go about as expected. However, I suspect this is only the first step towards Hibiki and Alicia reconciling. Pure Palette’s performance no doubt helps as well.
The sooner Hibiki and Alicia get back together, the sooner. I want to see Alicia smile again, though there’s no doubt that Hibiki is the one who wants that the most.

Aine and Mio had some really nice moments between them in this episode, too. I mentioned it before, but they seem to be more flirty in this episode – I hope that this is a trend that keeps up.

No doubt that Alicia’s going to go through the whole defrosting ice queen routine. I very much look forward to seeing the results of that.
Alicia’s family are decent people as well. Charles is clearly aware that Alicia needs Hibiki, which is why he got them into Solvette in the first place. The king cares for his people, and is only held back by his poor health.

Aikatsu Friends! Shining Jewel is a yuri anime. I’ve seen this sentiment going around on Twitter, and I totally agree. Hibiki wants to get back together with her ex-girlfriend, and has enlisted the help of a couple who are going strong: Aine and Mio.
I’ve also seen Hibiki described as a ‘disaster lesbian’, and honestly, I’d agree.
Basically, what I’m saying here is that Aikatsu Friends! Shining Jewel is good. Like, really good.

Next time, Love Me Tear arrives in Solvette.